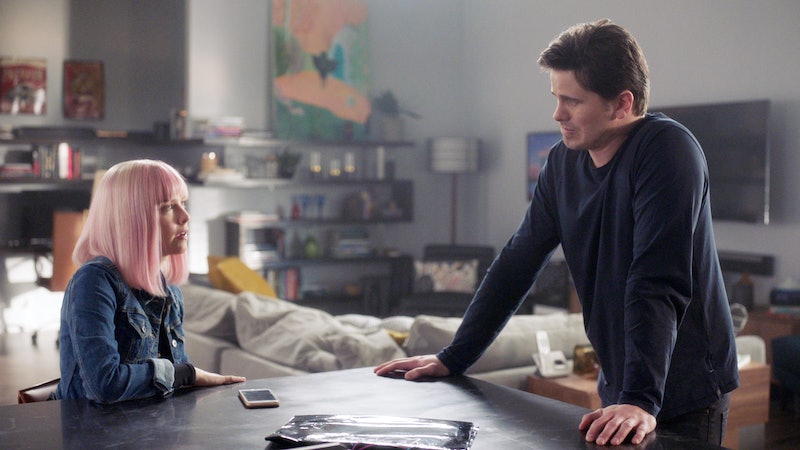 For one, Eric has Maggie's brother's heart... so them hooking up would be a little weird. Eric even physically recoiled when Maggie reached to touch his chest in Episode 5. Maybe if Eric didn't know whose heart he had, they could have struck up a romance. In their initial meeting, the two of them joked about an annoying restaurant host and seemed to have a similar sense of humor. In an alternate universe, they could have made it work, but in this one where Eric has Maggie's brother's heart, it's just a tad too much.

He's also still getting over the loss of his own partner Chloe, and may not be ready for a new relationship. He kept running her music shop after her death, and he seems fully in that world still with maybe no room yet for a new romantic partner.

If anything, it seems like Eric may just become friends with Maggie and sort of fill the hole her brother Chad left when he died. After Maggie told Eric that her brother used to sit in the front row of her pretend piano concerts, Eric offered to do the same for Maggie at an open mic night. She ended up not going to the open mic, but Eric was fully ready to take on that role in Maggie's life. He's also seemingly wary of causing too much trouble in Maggie's family dynamic, as he understands the complications of his existence also marking the end of Chad's.

He seems self-aware enough to not want to walk into a situation where he's splitting up a couple. His nod to Gary at the end of the episode signaled that Eric is very aware of Gary's presence in Maggie's life, and he likely won't overstep that. As Jason Ritter, who plays Eric, explained to TV Line, "Eric is doing a super-complicated, delicate sort of dance. He's trying to navigate a super-complicated situation, and he's trying his best." His best and least complicated move wouldn't really be to up and start dating Maggie.

However, even if Maggie doesn't start dating Eric, that doesn't mean things will be smooth sailing for her and Gary. The two are struggling to find themselves in the wake of her cancer being gone. Gary said in the episode that he doesn't know exactly how to support a cancer survivor who is cancer free, and Maggie just wants to move on from the whole thing. Her budding emotional relationship with Eric could cause further problems as she turns to Eric more and Gary less. The synopsis for the next episode (airing Oct. 31) says, "Gary's growing tension with Maggie comes to a head as she accidentally lets Colin out while she's on the phone with Eric." A move like that could certainly threaten Gary's relationship with Maggie.

Show creator DJ Nash was asked on Twitter if fans should worry for the state of Gary and Maggie's romance, and he didn't have a super uplifting answer. "It's [A Million Little Things] you need to worry about every single one of them. And the dog," Nash responded.

Speaking of the dog, he seems to factor heavily into Gary and Maggie's story in the upcoming episodes. When Maggie let him out, he may have gotten injured, because the synopsis for the Nov. 7 episode says, "Maggie helps Gary make a difficult decision about his dog, Colin." On the surface, that is terrifying news about Colin if the decision is potentially putting him down after an injury. But, looking a little deeper, it's perhaps a good sign that Maggie would be the one helping Gary make that decision, because it still means they're in each other's life even after what happened to Colin. Maybe they can make this thing work even with the Eric and Colin and post-breast cancer obstacles. If they can survive all that, they'll basically be endgame, no matter how close to Eric Maggie gets.