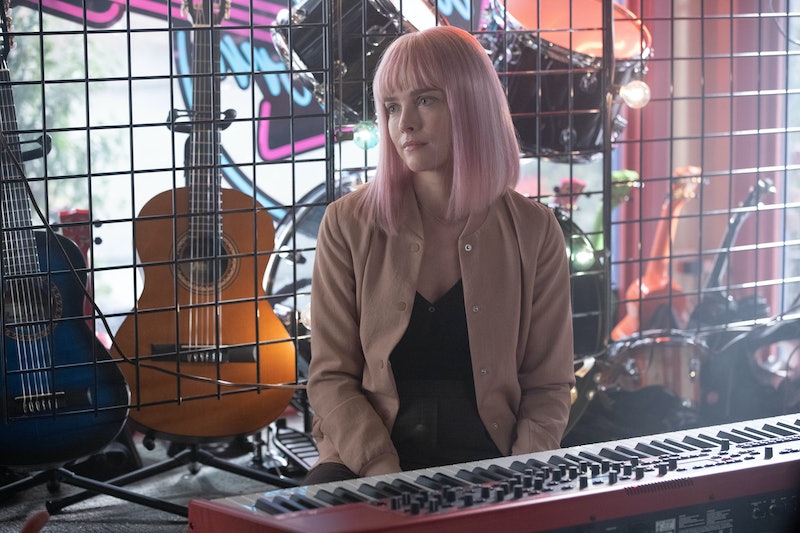 Spoilers ahead for A Million Little Things Season 2, Episode 5. Allison Miller has already graced the show's soundtrack once last season with her "I'm Still Standing" cover, but now she's singing in character, too. Maggie sings at the piano on A Million Little Things at the end of Episode 5, and it's a really brave and quiet moment for her character. No, she didn't end up going to Eric's open mic night, but she did let her guard down and decide to play and sing again — for herself. The scene was a little confusing because it was intentionally edited to make it look like Eric was sitting front row and watching Maggie sing, which would have made Gary's arrival that much more dramatic. But the fake out then revealed that Eric was watching a stranger play the piano at the open mic, and Maggie was back at her old apartment just playing for herself.

She chose to cover the 1980 Pete Townshend song, "Let My Love Open the Door" from his Empty Glass album. Townshend, best known for being in The Who, also had a successful solo career with hits such as this one. His version is much more '80s-ified with an upbeat melody and synth everywhere. Maggie's version was slow and stripped down to just its raw lyrics and tone. Her version worked well for the episode's closing montage which had her refrain, "let my love open the door to you heart," playing over scenes of Eddie and Katherine trying to work on their marriage, Delilah and her children celebrating their new little family member, and Gary probably wishing desperately that Maggie would open her heart more to him.

In the episode, fans learned that Maggie has a musical background, but that she let that part of herself go to focus on beating cancer the first time. By the time she was re-diagnosed, she had pretty much completely given it up. It makes sense then that she wasn't ready to fully get out there and sing for a crowd — something she's actually never done. Maggie told Eric that she just used to play for her late brother Chad. Her singing alone in her apartment can be looked at as her way of singing to him again, asking him to let her love open the door to his heart — which now resides in Eric.

This sudden talent of Maggie's to sing and play the piano isn't that unexpected. Miller, who plays Maggie, has a strong musical background herself. Seventeen magazine reported that the actor can dance, sing, and play the piano and guitar. Miller was even featured on the Million Little Things Season 1 soundtrack singing Elton John's "I'm Still Standing" from the episode in which Maggie began to realize that she did want to fight her cancer again. The tune starts out slow but hits a powerful crescendo that will give you chills to hear it paired with Maggie's resolute face in the mirror, as she decides to fight and try to live.

At the time, the actor received a really positive response to her Elton John song cover, so it was really only a matter of time before A Million Little Things relied on her powerful singing talent again. Maybe one day Maggie will go to an open mic, but right now she's just getting reacquainted with herself post-cancer and re-learning how to do the things she once loved now that she has the time to do them.

The show will likely continue to follow her singing journey as it goes along, which is a real treat for fans who get to keep hearing Miller's hauntingly beautiful takes on upbeat tunes.