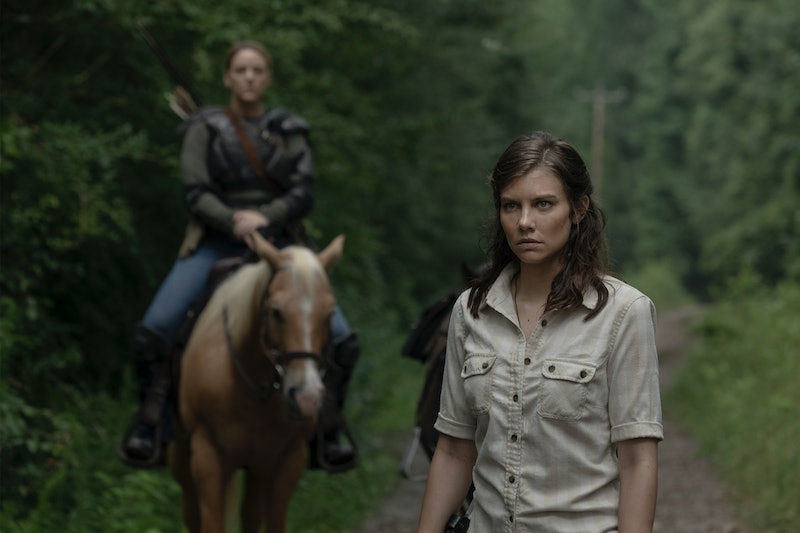 The Walking Dead midseason finale was filled with a few very exciting twists — including the widely anticipated debut of The Whisperers. However, amid all the usual zombie drama, there was still one person missing in action. That person was Maggie, who has gone unseen ever since the show's latest time jump. However, there's still a chance that Maggie could return to The Walking Dead, and according to what showrunner Angela Kang had to say in her new interview with Deadline, it'd actually be pretty easy to explain her reappearance.

The series has said goodbye to several prominent characters as of late. This includes Maggie, Rick Grimes, and most recently, Jesus, who met an unfortunate fate in the final few moments of Sunday night's episode. And while fans may be quick to shed a tear for these losses, Kang wants viewers to hold out hope that any of them could come back in the future, particularly when it comes to Maggie. And it's all thanks to one very important thing. "Obviously [there are] characters that we love that we said goodbye to," Kang told Deadline. "We are still very hopeful that Maggie will be back with us."

As good as that all sounds, you may find yourself wondering how it would even be able to happen? "Because of the expansion of the universe, and because of time jumps, we passed seven and a half years off-screen on the show," Kang explained.

She further explained how this could lead to more Maggie in The Walking Dead's future. Kang said,

"That allows for stories to go back in time, so there's an opportunity for seeing characters to come back because of these things that are built into the story. So, I think that there's just a lot of exciting opportunities, that we've been able to do some things that we've never done on the show before."

Lauren Cohan, who plays Maggie, has signed on to star in the new ABC drama titled Whiskey Cavalier alongside Scott Foley, so it's unclear when or even if her schedule will allow for her to ever make an appearance on The Walking Dead again, but it's something Kang seems more than willing to explore. And given the use of flash-forwards and flashbacks, it'd be easy to find a way to bring her back into the story in a way that still makes coherent sense for the narrative.

"Lauren and I were just texting the other day, and Andy [Andrew Lincoln] has come back to set to shadow a director," Kang revealed in the same interview. "So, they're very much still in The Walking Dead family and I think they always will be." She added: "I know we will continue to always be in contact and talk about creative and also just life things. So that's a really great thing. I'm very hopeful that both of them will be back with us in the future in some capacity or another."

But whether or not those hopes come to fruition, there's certainly a lot for fans to think about until the series returns on Sunday, Feb. 10, 2019. From the look of things, the remaining characters could use some of Maggie's leadership skills right about now.