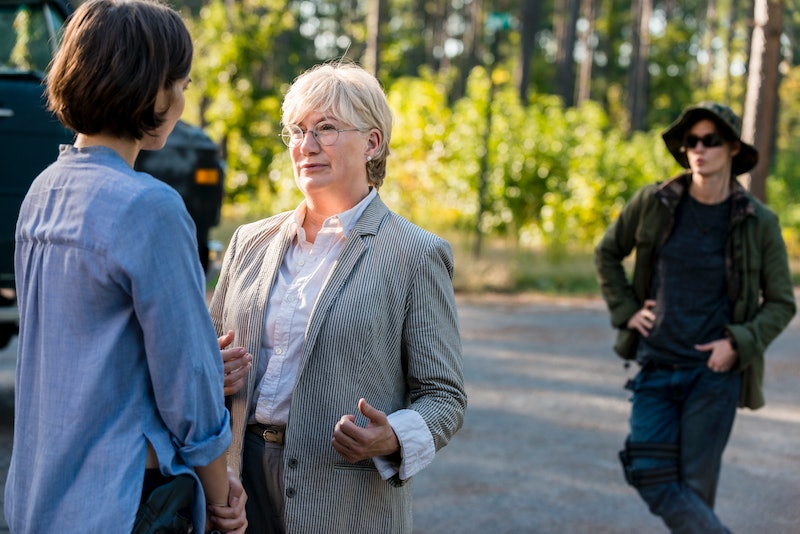 The six-year time jump on The Walking Dead Season 9 means the appearance of plenty of new faces. But it also means some familiar faces are missing, like Maggie Rhee. "Stradivarius" gave the first look at the Hilltop since the time jump and revealed where Maggie is on The Walking Dead. As many fans expected after Lauren Cohan revealed she was taking a hiatus from the series, Maggie's last episode was the same as Andrew Lincoln's. In this new world, Jesus explains that Maggie packed up her son Hershel and went to join Georgie's camp. While that unfortunately means no Maggie or her son Hershel on The Walking Dead for now, fans can take solace knowing that they are off in the post-apocalyptic world doing some good.

Cohan announced leading up to Season 9 that she was leaving The Walking Dead. But the actress also stated that her time with the series wasn't 100 percent over, telling Bustle, "We're definitely leaving on an up note with Maggie — and an open note." While neither Cohan or AMC revealed what Maggie's fate would be, the Season 9 premiere gave a major hint when Jesus said how Georgie had been trying to recruit Maggie. In "Stradivarius," the series confirmed that Maggie was with Georgie through a conversation between Tara and Jesus: Maggie went with Georgie and "the twins" (Hilda and Midge), leaving Jesus in charge of the Hilltop.

While Jesus has Georgie's record collection to fill the Maggie-shaped hole in his life, he hasn't adjusted well to his new leadership position. Tara is his second-in-command and she's far more hands-on than he is. Tara accuses Jesus of thinking that Maggie has only joined Georgie temporarily and while Maggie could come back if Cohan returns to the series, Jesus knows he should be stepping up. After all, Maggie has written in her letters to him that she's happy with Georgie.

If you're struggling to remember what the deal with Georgie is, she only appeared in one episode in Season 8, "The Key." Jayne Atkinson — who is often cast as a government leader, like in shows 24, Criminal Minds, House Of Cards, and Madam Secretary — portrayed this mysterious woman. Georgie left crates outside of Hilltop's gates with the message that if they were filled with food and records, she would give them "A Key To A Future." Michonne, Maggie, Rosita, and Enid took a gamble and decided to meet Georgie and her security detail of Midge and Hilda with their van filled with crates of food and records (music only, no spoken word).

Interestingly enough, it was Michonne who was the most trusting of Georgie while Maggie was reluctant to make a deal. The tables have turned now with Michonne being suspicious of Magna's group and Maggie off with Georgie. But that's because Georgie proved herself to be worthy of trust. She not only gave the struggling Hilltop food, but she provided them with the titular "Key" — handwritten plans of medieval technology that would allow the Hilltop to refine grain and create windmills, watermills, silos, and aqueducts, which is what the communities are now trying to do.

Georgie only stopped in briefly to the Hilltop, but she promised to be back, so she most likely returned in an offscreen encounter. She also kept up a correspondence with Maggie as she traveled around, finding other communities to assist her in her quest. Where Maggie and Georgie are isn't explicitly mentioned, but Siddiq told Michonne that Maggie is "someplace far" helping Georgie with "some new community." Maggie is able to communicate with Jesus through Midge and Hilda, who stop by with letters.

Besides Maggie's exact location, another mystery is what happened between Maggie and Michonne. When Rick seemingly died, they had made amends over Negan. But something else occurred between them that led to the Hilltop and Alexandria completely cutting off ties with one another, so much so that Michonne was literally just informed that Maggie had left. If Maggie returns one day, hopefully Michonne and Maggie can put the past behind them. After all, even if they doubt it sometimes, they both understand the importance of humans sticking together.

More like this
The Miraculous Real-Life Thai Cave Rescue Mission Still Resulted In 2 Deaths
By Brad Witter
'Line Of Duty' Fans Might Recognise These 'Bloodlands' S2 Filming Locations
By Sophie McEvoy
'The Lord of the Rings: The Rings of Power' Revisits Iconic Spots From 'The Hobbit'
By Darshita Goyal
'The White Lotus' Season 2 Finally Has A Release Date
By Bustle Editors
Get Even More From Bustle — Sign Up For The Newsletter