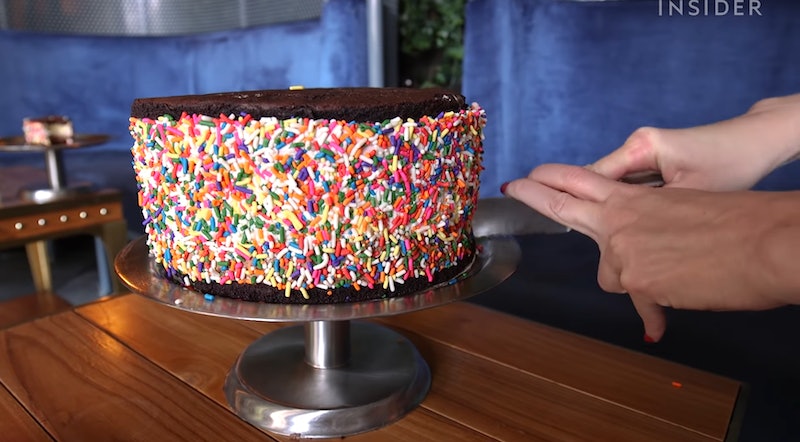 I haven’t lived in New York for about five years now, but I still frequently find myself missing it — and now, I really, really wish I had a trip planned to it in the near future: I just found about the Magic Hour Rooftop Bar and Lounge, which has carousel seating, mixes up drinks inside actual disco balls, and serves giant — and I do mean giant — ice cream sandwiches. It’s basically everything my 8-year-old self ever wanted out of life, except that it’s definitely, definitely for grownups.

Located high atop the Times Square location of the Moxy Hotel — Marriott’s boutique brand — and created by restaurant and nightlife company TAO Group, Magic Hour bills itself as “New York City’s largest indoor/outdoor hotel rooftop bar and lounge” featuring an “urban amusement park with adult sensibilities.” You might recall it making a splash when it opened in the fall of 2017; at the time, its mini-golf course, Foreplay, was the big headliner, drawing in attention for its flirty, risqué theming. It certainly is eye-catching; scattered throughout the course are statues of animals, each positioned in a sexy, come-hither-style pose. I’m not sure it quite reaches Jessica Rabbit levels of intensity, but it’s pretty close.

However, Foreplay isn’t the only bright and sparkly activity available for those who choose to spend their evening at Magic Hour; there’s also a topiary garden, incredible views of the Empire State Building, and tons of bars and seating areas, each with a different vibe — including one that’s literally a carousel. Instead of horses and unicorns, it’s got cushy benches with tables for your drinks… which, honestly, is probably for the best. Booze plus carousel horses is usually a recipe for disaster. Oh, and if you indulge a little too much on any given night, you can also book a “Crashpad” in the hotel itself: A bit more basic than Moxy’s actual rooms (although still cute, from what I can see via photographs), the Crashpads are each 120 square feet and have a twin bed and a flat-screen TV. You can order them off the menu at $99 a pop.

The food and drinks at Magic Hour are just as spectacular-looking as the bar itself is — and many of them tap into that same sense of nostalgia gone grown-up that, say, a naughty mini-golf course and a lounge-y carousel do. The nighttime spot is known for its shareable cocktails, many of which come served in hilarious drink delivery devices — like disco balls:

Which, y’know, aren’t cheap; according to Magic Hour’s brunch menu, this drink, which is called Disco Ball For All, costs a whopping $250. However, it’s also meant for 15 people — so when you do the math, that only comes out to less than $17 per person. For the curious, it’s filled with Absolut Elyx and Bajan Tiki Punch.

If disco balls aren’t your thing, though, there are plenty of other multi-person drinks on the menu that put your standard Scorpion Bowl to shame. This one, for example, is called Popcorn, Anyone?:

The oversized… uh… bucket is designed to look like an old-timey popcorn tub; it’s filled with Belvedere Wild Berry, agave, Combier Framboise, lemon juice, and half a bottle of Moet, as well as garnished with raspberries, flowers, and limes, according to Thirsty Mag. It’s $150 per bucket, so assuming you share it with some pals, you’re probably looking at something like $15 per person.

Less showy, perhaps, but no less fun is the Party Pouch:

Which, let’s face it, is basically an alcoholic Capri Sun. Inside the 18-ounce pouch is a mix of Finlandia Grapefruit Vodka, Yuxu Citrus, and a touch of pomegranate.

Even the Jell-O shots have been amped up — they look like boozy gummy bears:

This one is mojito-flavored, apparently. Just, y’know, in case you were expecting it to be something like blue raspberry.

But I would argue that the biggest draw — at least for the nostalgia-driven crowd — is the gigantic ice cream sandwiches you can get at Magic Hour. This video about the treat from INSIDER is currently making the rounds, and, I mean… it’s not hard to see why:

It’s basically a cake… except that it’s a sandwich. It’s got three layers, and it is covered in rainbow sprinkles.

That is delightful. That is everything I have ever wanted in a dessert.

According to the video, the sandwiches are made by stacking rounds of chocolate, vanilla, and strawberry ice cream on a chocolate cookie crust; then the sprinkles get pressed gently onto the edges before the whole thing is served on a cake platter. Heck, and yes.

Like the shareable cocktails, though, this treat will cost you; according to INSIDER’s video, an ice cream sandwich that size from Magic Hour will set you back $120. Again, if you split it between a ton of people, that cuts the cost considerably; sharing it with 14 friends means you’ll all only owe $8 for your slice. Then again, though, I would totally understand if going to a popular — and therefore crowded — place with a huge crowd of pals isn’t really your jam. (It’s not mine either, really. I just… don’t like people enough for that.) And hey, you can get a mini-sized one, too, if the giant ones don’t quite do it for you — so at least there’s that!

Oh, and hey, if all of this sounds like a good time to you, make sure you stop by on a Thursday sometime. Thursday at the Magic Hour, you see, is Circo Thursday — and on Circo Thursday, the whole bar gets transformed into a big top, with ballerinas, gymnasts, jugglers, and all sorts of other performers turning the space into one, big, carnivalesque dream.

I might have to overcome my dislike of large crowds for this the next time I’m in New York. I’m a sucker for the circus, and this one sounds weird and wonderful and full of delicious cocktails.

The Magic Hour can fill up pretty quickly, but if you want to visit, head to the Moxy Hotel on 7th Ave. at 36th St. It’s certainly going to be a night to remember.