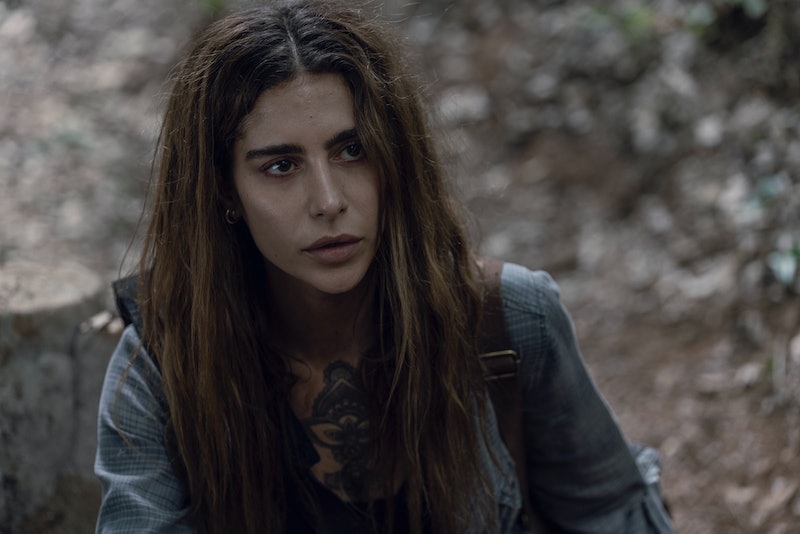 Spoilers ahead for The Walking Dead Season 10, Episode 5. There's trouble in the zombie apocalypse for Magna and Yumiko on The Walking Dead, as it turns out that a cornerstone of their relationship is based on a lie. In case you were confused about what all the drama was about in the Nov. 3 episode, it's important to remember that before walkers took over the world, Yumiko was Magna's lawyer. But it turns out that Magna was not as innocent as Yumiko thought when she was defending her back then. Magna and Yumiko in the comics never had such an intense betrayal — or such an intense backstory. But if this couple shares the same fate as their comic counterparts, they could just make it to the end.

The pair started the previous episode seemingly happily enough as they shared an intimate moment. Yet, after the tree fell and damaged the Hilltop's fence, Magna took issue with Yumiko stepping into a leadership role and disagreeing with her judgment calls. This resentment bled over into "What It Always Is" when Yumiko confronted Magna about stolen food from the Hilltop supply.

Apparently, Magna has made a habit of stashing food stores away from communities she's a part of. As the women argued about this deception, Magna dropped an even bigger secret that might cause irreparable damage to their relationship — that she was guilty of the crime that Yumiko defended her of in court.

Yumiko and Magna met 13 years ago before the zombie apocalypse when Yumiko was Magna's defense attorney in a murder trial. Yumiko had always thought her client-turned-lover was innocent because despite attorney-client privilege, Magna had never told Yumiko the truth until now. All of these years later, Magna confessed that she did kill the man who had seemingly sexually abused her cousin, a child at the time. Yumiko is astonished that Magna has kept this massive secret from her this entire time and it seems like there is no way their relationship will ever be the same again. "I think you should find another place to sleep," Yumiko tells Magna.

Michonne had discovered that Magna served prison time in Season 9, though all of this character development is unique to the TV series. Magna and Yumiko were a couple in the comics, but neither of them had much backstory. The only information readers really learned about their lives pre-apocalypse was that Magna's father was homophobic and this made Magna scared to make their relationship public.

They also didn't seem to know each other before the zombie apocalypse and weren't a couple when they were first introduced. While they entered the scene in Issue #127, they didn't begin dating until Issue #170.

There was tension in their comic relationship because of Magna's hesitation to be out. But once Yumiko told some members of the community — including Michonne, Siddiq, and Eugene — that they were dating, they continued to be in a happy relationship all the way until the graphic novel ended with Issue #193 years in the future where Carl was all grown up with a child of his own.

Ahead of Magna's group's introduction to the show, showrunner Angela Kang told Entertainment Weekly, "None of these characters are literal to the way they are in the comic book, but they're still true to the spirit of these characters." But the TV series is taking massive liberties with Magna and Yumiko and their relationship. Following the episode "Silence the Whisperers" and the reveal that Yumiko was Magna's lawyer, Kang told EW that more of their backstory would be exposed.

She said, "It was not a relationship of equals, necessarily, so in the complicated ways that people come together in the apocalypse, obviously, a lot of things have changed between them, but there’s clearly still some deep, difficult feelings that Magna's certainly dealing with about all of that" — and now fans know exactly why Magna has such difficult feelings.

Based on this new bombshell, it seems that these two have ended thing for good. Whether they will get back together is far from certain since Magna doesn't appreciate the way Yumiko treats her and Yumiko has been deeply betrayed. Yet, their happy ending in the comics could mean they'll find their way back together eventually. Unless Kang and her writing team have more ideas about where to take their story.