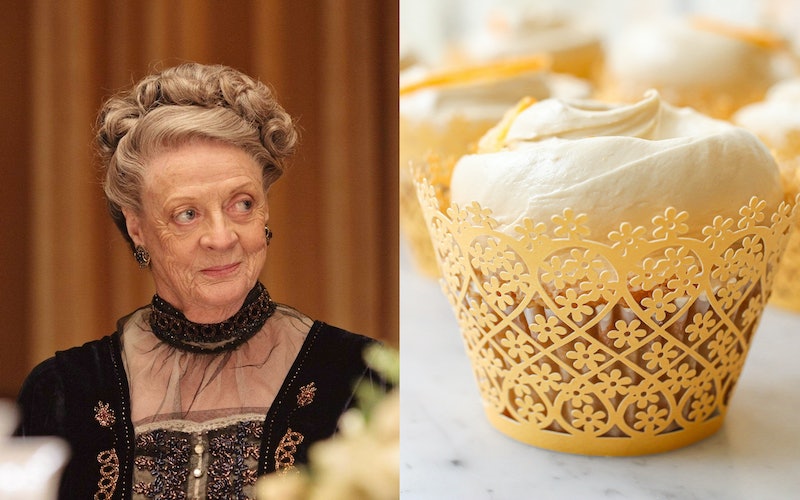 Calling all dessert aficionados, pop culture enthusiasts, and tea lovers: One of the most visible of bakeries just released a new dessert in honor of one of the most visible of small and big screen properties. Magnolia Bakery launched a Downton Abbey cupcake recently — and it legit tastes like Earl Grey tea. If the idea of an Earl Grey-flavored cupcake sounds weird to you, a word of advice: Do not sleep on tea-flavored desserts. Seriously. I have never, ever had a tea-flavored dessert I did not like. They’re terrific, so I would bet this one probably is, too. It sounds fit even for Violet Crawley, AKA the Dowager Countess of Grantham, AKA the inimitable Dame Maggie Smith — but you’ll have to act fast to get it: It’ll only be around for a single, solitary month.

Magnolia’s Downton Abbey-inspired treat was developed in partnership with Focus Features to celebrate the Sept. 20 release of the hit television series’ big screen feature film. Both the cake and the buttercream are made with loose-leaf Earl Grey tea, giving the whole confection a citrusy, floral appeal perfect for enjoying alongside a cup of the tea itself. Or you could pair it with one of the many Downton Abbey-themed teas that have just been released. Or Downton Abbey wine, if you’re looking for something a little stronger. Or, for something stronger yet, Downton Abbey gin.

(You’ve got options, is what I’m saying.)

The Earl Grey cupcake clocks in at $4.25, making it a bit more expensive than your standard Magnolia cupcake (typically, they’re around $3.95 these days, according to the 2019 Magnolia Bakery menu) — but then again, it is a special edition that will only be available for a short while. You can grab it at Magnolia locations in New York, Boston, Chicago, Los Angeles, and Washington DC throughout the month of September.

Originally founded in 1996, Magnolia Bakery opened up its very first location in a tiny storefront on Bleecker Street in New York’s West Village — but according to staff lore, cupcakes weren’t initially the bake shop’s main attraction. “The legend of the Magnolia cupcake… is that one day there was a little batter left over, so they decided to just bake off some cupcakes and they sold really well,” reported am New York in 2016. Both demand and supply eventually grew, and Magnolia cupcakes quickly became a hot commodity.

Four years later, the watershed moment occurred: On July 9, 2000, the fifth episode of Sex and the City’s third season aired. Titled “No Ifs, Ands, Or Butts,” the episode featured a short scene in which Carrie and Miranda, as played by Sarah Jessica Parker and Cynthia Nixon, noshed on Magnolia cupcakes while sitting on a bench right in front of the bakery, discussing Carrie’s attraction to the recently-introduced Aidan Shaw (John Corbett) — and thus, Magnolia was introduced to the world at large. Sex and the City was at its height at the time, and it became common for fans of the show to stop by Magnolia during pilgrimages to New York — a level of success it enjoys even now.

Chief baking officer Bobbie Lloyd theorized to am New York in 2016 that the bakery’s continued popularity has something to do with cupcakes being an affordable luxury — as opposed to the unaffordable luxury seen so frequently in the show. “[The Sex and the City characters] had the means to do and buy whatever they wanted. They wore Manolo Blahnik shoes, they went out to the hot nightclubs and got Cosmopolitans,” said Lloyd. “[But] anyone could afford a cupcake. So anyone could come in the bakery — maybe not in a pair of Manolo Blahniks, but they could have Carrie’s experience by buying a cupcake for $3 at the time.”

Magnolia changed hands in 2007, and since then it’s grown from the single West Village location to a small empire. There are now 10 locations scattered throughout the United States — six in New York and one each in Chicago, Los Angeles, Washington DC, and Boston — and around 14 more in far-flung international spots. It’s become a pop culture staple in more ways than one, too; Broad City took a tongue-in-cheek look at the bakery’s reputation and identity during the show’s five-year run between 2014 and 2019 — and now, we’ve got the Downton Abbey connection, as well.

Oh, and did I mention that they ship nationwide now, too? Because they do, thanks to the wonders of Goldbelly. No matter where in the United States you live, you, too, can give yourself the gift of a Magnolia cupcake (or other dessert, if cupcakes aren’t your thing). In contrast to individual cupcakes purchased in person at one of Magnolia’s actual bakeries, orders for Magnolia goodies online aren’t cheap — you can only get cupcakes by the dozen, which will set you back $65 for the lot — but to be fair, that comes out to about $5.40 per cupcake including the shipping costs. Shipped cupcakes arrive frozen to guarantee freshness; you’ll want to let them stand at room temperature for three to four hours before you eat ‘em.

Find out whether you’ve got an actual Magnolia location near you here — and if you do, then get yourself down there are enjoy a Downton Abbey cupcake or two. Lady Mary would absolutely approve.