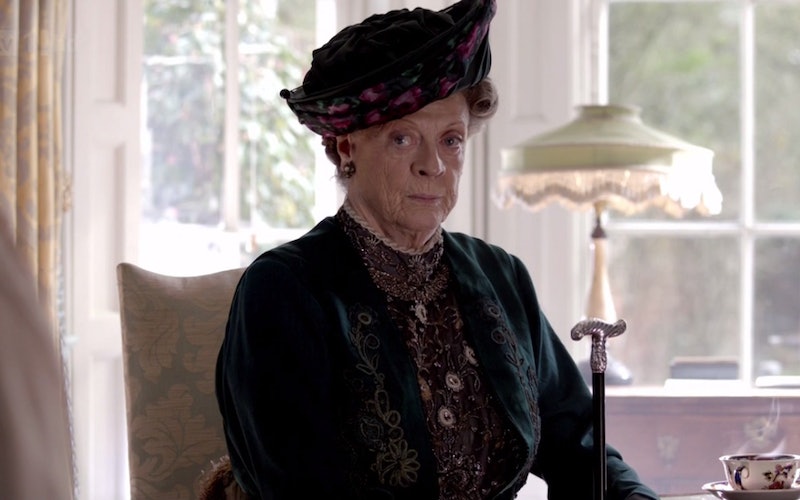 You're probably still reeling from Downton Abbey 's Season 5 finale, so you're going to want to sit down for the next bout of Grantham news. Maggie Smith is leaving Downton Abbey after Season 6, which means we only have one more season of her side-eye glares, constant judgements of family members and newcomers alike, and perfectly-timed zingers. There's no one on television who delivers a burn quite like the Dowager Countess of Grantham, and I'm just praying that she decides to go disappear with someone instead of being killed off the show. If Downton continues for another few years (or heck, even decades), the youngest members of the family — a.k.a. George, Sybil, and Marigold — are going to need some guidance from their sharp-tongued grandma. A little sarcasm tossed with some insults and general shade can be taught, but only by someone as perfect as Violet.

To start the mourning process early, a celebration is in order. Below, I've highlighted some of the Dowager's best one-liners from the past five seasons. They're perfect for everyday use, even in 2015, and here's to hoping that Season 6 is so jam-packed with them that we have enough to use for the rest of our lives. If not, at least we'll always have these zingers.

When She Knows She's Right

Which Happens A Lot

Those are her four favorite words.

When She Can't Handle Your Whining

Or Your Snobby Behavior

Or Your Vulgar Words

But they love her anyway.

And Sometimes Her Best Lines Are When Words Escape Her

Her face says it all.

Well, Not All Of Them

This one definitely needed words.

Some Of Her Zingers Are About Looks

Ouch. Need some ice for that burn?

A Lot Of Them, Really

Others Are About Bad Personalities

And Shade Is Always Delivered

The Best Of All Is When She Threatens Death