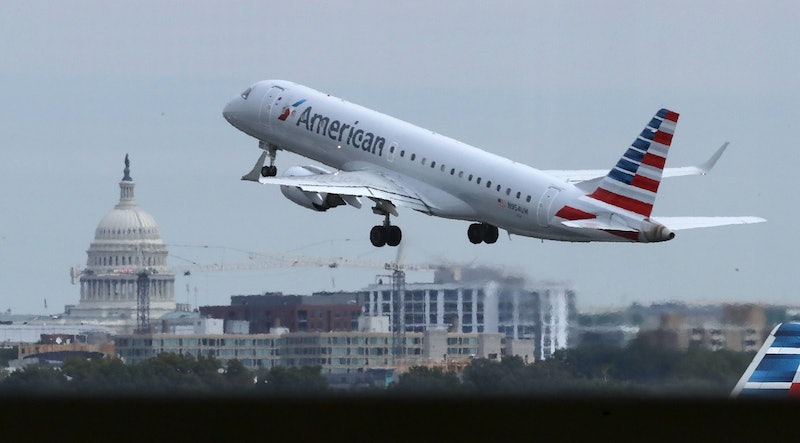 A recent discovery on several commercial airlines has given many travelers concerns over their in-flight privacy: The seatback entertainment screens on some planes have cameras in them, reports BuzzFeed News. Most airlines whose planes have been discovered to have the cameras have since confirmed that they do exist, but aren’t currently operational; however, many passengers remain wary.

Singapore, American, United, and Delta Airlines have all acknowledged the cameras’ existence, noting that they’re part of the hardware provided by outside manufacturers; they also state, though, that the cameras aren’t currently activated, nor are there any plans to activate or use them. Said a spokesperson for Singapore Airlines to Bustle via email, “Some of our newer IFE (in-flight entertainment) systems provided by the original equipment manufacturers do have a camera provisioned and embedded in the hardware. These cameras have been intended by the manufacturers for future developments. These cameras are not enabled on our aircraft and cannot be activated on board. We have no plans to enable or develop any features using the cameras."

American Airlines added in a statement provided to Bustle, “Cameras are a standard feature on many in-flight entertainment systems used by multiple airlines. Manufacturers of those systems have included cameras for possible future uses such as seat-to-seat video conferencing. While these cameras are present on some American Airlines in-flight entertainment systems as delivered from the manufacturer, they have never been activated and American is not considering using them.”

United and Delta Airlines have also both provided statements to Bustle. Said a spokesperson for United, "As with many other airlines, some of our premium seats have in-flight entertainment systems that have cameras installed by the manufacturer. This is a standard feature that manufacturers of the system have included for possible future purposes such as video conferencing, however our cameras have never been activated on United aircraft and we have no plans to use them in the future."

Meanwhile, a representative for Delta stated, "A limited number of Delta in-flight entertainment screens have cameras that were included by the manufacturer. They are not functional and Delta does not have any plans to install the necessary software to use them."

The back-to-back discoveries of all these cameras began on Feb. 17, 2019, when Twitter user Vitaly Kamluk (@vkamluk) tweeted out a photo of an “interesting sensor” found on an in-flight entertainment screen on a Singapore Airlines flight.

Singapore Airlines responded on Twitter shortly thereafter, confirming that some “newer inflight entertainment systems provided by the original equipment manufacturers do have a camera embedded in the hardware” and stating that the cameras are disabled on the aircrafts on which they appear.

A former site reliability engineer for BuzzFeed, Sri Ray, then told BuzzFeed News that he had noticed a similar camera in the premium economy cabin on an American Airlines flight to Tokyo in September of 2018. American Airlines similarly confirmed to BuzzFeed News that the cameras exist, but are not active. And on Monday, United and Delta Airlines also confirmed the existence of cameras in the IFE displays on some of their planes to BuzzFeed News, noting that they are in the premium economy cabins on some international routes. As with the previous two airlines, United and Delta said the cameras were not active, nor were there plans to activate them in the future.

As The Verge noted, the cameras could still be a privacy concern even if they’re not enabled. “Any camera attached to a connected device has at least some risk of being hacked,” wrote Jon Porter for the outlet, “and while an aircraft is less accessible than an internet-connected laptop, there’s still a possibility of it being compromised.”

It’s possible that the manufacturers of the IFE systems “didn’t consider the privacy implications” of putting cameras right in people’s seatbacks, journalist Seth Miller, who has covered this beat for several years, told the Associated Press. The reasoning, Miller theorized according to AP, was that “companies assumed that passengers would trade their images for convenience, as they do with facial-recognition technology at immigration checkpoints.” The lack of transparency about the cameras, however, has rubbed many travelers the wrong way.

Writing for BuzzFeed News, Nicole Nguyen suggested that “airlines could quell passengers’ concerns by covering the lenses with a plastic cover, if indeed there is no use for the camera”; however, passengers could also take matters into their own hands by following the time-honored tradition of pasting a piece of tape or sticker over the camera lens themselves. A sticky note will even get the job done.

As Josh Ocampo observed at Lifehacker, “For now, it seems like a minor concern and it’s not exactly a subtle camera either” — that is, you’re unlikely to miss it. And if it bugs you, you can always add a roll of tape to your carry-on luggage the next time you take to the sky.

More like this
20 Smart Devices Under $35 That’ll Change The Entire Vibe Of Your Home
By Emma Carey
Here's How To Get Your iPhone To Update Automatically Forever
By Emma Carey
Why Everyone Is "Soft Tagging" Friends On Instagram Right Now
By Alexis Morillo
Craving The Beach? Here's Your Guide To A Solo Vacation In Turks & Caicos
By Alexis Morillo
Get Even More From Bustle — Sign Up For The Newsletter