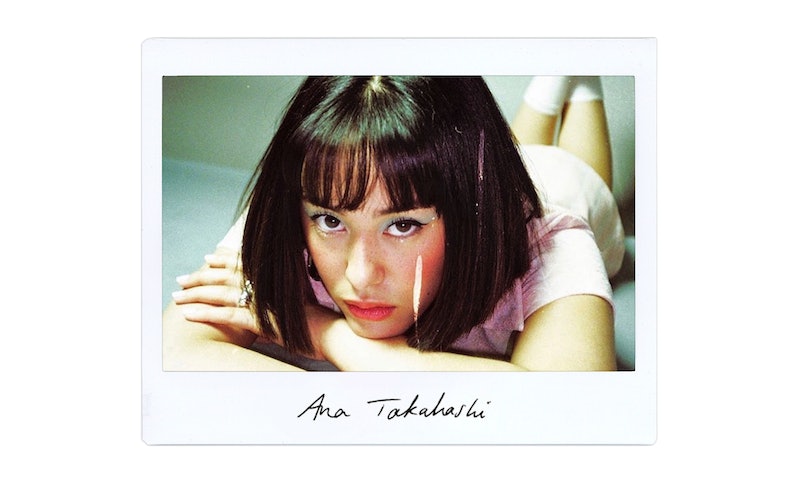 When celebrities hang out with Bustle editors, we want to give them the chance to leave their mark. Literally. So we hand them a pen, a piece of paper, a few questions, and ask them to get creative. This time, makeup artist Ana Takahashi is leaving her mark in the Bustle Booth.

Instagram makeup extraordinaire conjures mental images of a perfectly contoured face, gorgeously glowing skin, noticeable lips, and groomed brows. In other words, it kinda all looks the same. Ana Takahashi's work is not that. Treating the skin like a canvas, she fuses artistic techniques with cult film references and rainbow brights.

Rising to Instagram fame as a teenager, London-based Takahashi has become the go-to makeup inspiration for those who can't stand the homogenous look. A few years prior marked Takahashi's first foray into cosmetic artistry. "I got into makeup when I was around 13 [or] 14, and sort of combined that newfound love with art," she tells Bustle.

In fact, it was her mum who introduced her to experimentation. "My mum used to manage a store in the airport that sold loads of high end makeup, so she’d always get makeup for free," she told Maybe Yes Maybe No magazine. "I would always raid her cupboards when I was younger and play around with it."

That childhood enthusiasm has led to some of the most creative looks exhibited on Instagram today. There's the pearl-encrusted masterpiece inspired by Balmain's AW12 collection, the heart-wrenching work of art taken from Leonardo DiCaprio's Romeo + Juliet shirt, and the tranquil portrait reflecting Venice's canal setting.

While Takahashi often focuses on taking fashion designers' collections to an ethereal new level, she admits to not being a huge fashion fan. But, if she had to choose a favourite designer, it would be Thierry Mugler "because of the exceptional craftsmanship that goes into constructing his garments and how dramatic he made his runways." Makes total sense.

What she does profess a love for, however, is cinematography. Speaking to Metal magazine, she listed some favourites, including Blade Runner (both the original and new version), Birdman, Star Wars Episode IV, and "every Wes Anderson movie."

Naturally, the makeup artist has some strong opinions about beauty. She wishes everyone would leave their eyebrows alone, but regularly uses a clear bar of soap to keep brows groomed all day long. She is waiting for the return of blush, telling Bustle that "everyone looks 10 times healthier" with it. And she isn't into excessive skincare routines.

"Honestly, I think most skincare brands are scamming us by telling us we need this and that when, in reality, a 20-step skincare routine is completely unnecessary," she told Maybe Yes Maybe No magazine, adding: "The one thing that really makes my skin amazing is cutting out carbs [from] my diet (which is so hard but so worth it)."

Her future isn't set in stone. Aside from responding to the inevitable calls from magazines and brands — she's already been featured in American Vogue — she says she has no concrete plans for the year ahead, joking: "Maybe I can start by giving the student loan people a call back, they’ve been ringing me like crazy."

Check out more of Takahashi's (completely accurate) views on fear, coffee, and Ben Affleck's back tattoo in the Bustle Booth questionnaire below.