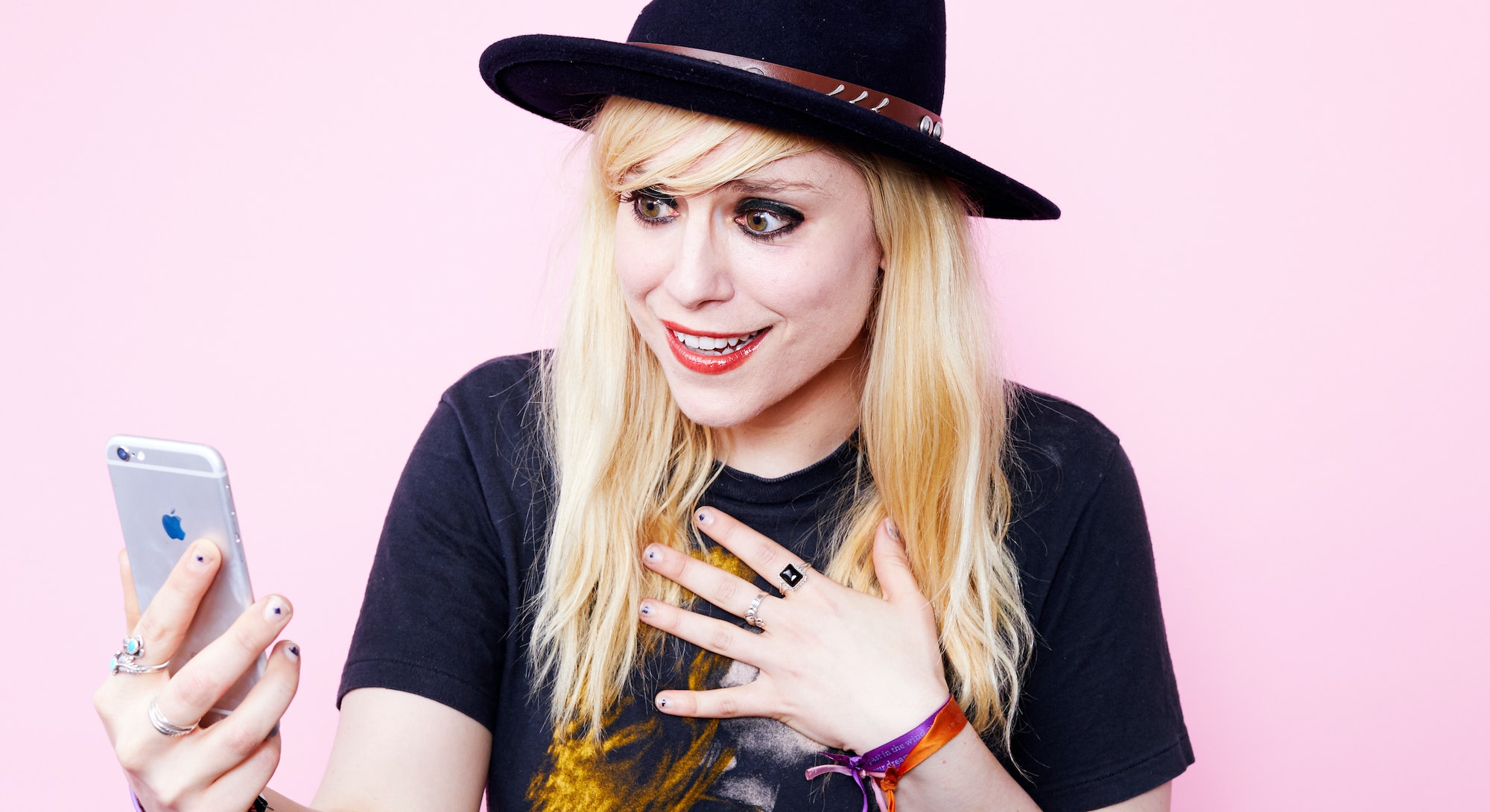 In a world where people are glued to their phones, Lane Moore brings online dating to life with a comedy show, appropriately titled Tinder LIVE!, that turns the swipe-left struggle into an interactive audience experience and has featured comedians like Awkwafina and David Cross. She's even hit the road, taking a sold-out tour across the country. When she's not on stage, Moore tweets, 'grams, and runs a Tumblr called Male Feminists of Tinder, which sheds light on the dudes who claim to be feminists in order to get laid. You may also recognize her from her appearance on HBO's Girls, where she tried to check Marnie's self-absorbed attitude.

Now Moore is sharing why it's worth seeing the humor in the whole online dating process and how to remember you're not alone, as told to Associate Entertainment Editor, Jamie Primeau.

I'm a standup comedian and I am here to tell you that I would like to fall in love in an adorable way even though it's not cool. What can I say? I'm a hopeless romantic. That may sound surprising coming from someone who's runs a comedy show (Tinder Live!) where they swipe through dating apps on stage, but the cynicism plaguing romantic love never made sense to me. I don't get the way so many people seem to not care about romance or relationships. l know there are men and women out there who want to fall in love; who are dying to have all that cute sh*t happen; who want to plan cute dates and really give things a shot. After all, I'm one of those people.

At the same time, I also need to crack jokes about this bonkers dating experiment we've all agreed to, if I'm ever going to get there. Like most people, when I began online dating, I wanted something magical to happen, before hitting the realization that it's a frustrating, lonely experience. So to cope, many of us act "too cool" — it seems better not to care.

And I get it, especially in the face of the online daters who make the whole process so damn painful. The worst things aren't even the gross photos (like one pic I encountered of a guy laying on a couch with a beer box over his penis). The truly upsetting moments are when you find guys who feel the need to yell at women. They'll write things, in all caps, like, "WHY'D YOU PUT UP GROUP PICTURES IF YOU'RE NOT THE HOTTEST ONE?" Or, "IF YOU DON'T WANT TO TALK TO ME, DON'T EVEN SWIPE RIGHT." We haven't even met and you're already yelling. Is that really how we're going to start this? Weeding out this kind of crap makes the whole process so fraught and frustrating.

Luckily, I'm also the kind of person who always finds this kind of pain really funny, and encouraging people to laugh through the experience is part of the motivation behind my show. At Tinder LIVE!, I'll open the app on a projector and get audience input on who to swipe on and what to write. There are segments like "This Might Be My Baby," where we guess whether the infant actually belongs to the guy posing with it and "Which One Is It?" for when there are, like, 10 people in the profile photos and you don't know who you're trying to have sex with. It's all in good fun, but my ultimate goal is making people feel less alone.

No one knows what they're doing when it comes to online dating, myself included. So there's a real sense of community at my shows, where we feel like we're all in this together. I always say it's like Mystery Science Theater with Tinder. Even if someone has never been on a dating app, or they've been married for like 20 years, they still get it. The search for love is just so painful and universal. Everyone can relate to the struggle.

In fact, that's exactly what I hear from a lot of women who see the show. I just think it helps to watch a woman approach dating without fear, to not be phased or take the process super seriously — to laugh at this whole crazy process.

People worry so much over saying the right thing on an app or to someone they're dating, but I'm just like, whatever, if it's meant to be, there's nothing too weird that I can say. (And trust me, I've said plenty of weird sh*t.) In fact, I know it may seem scary or, even worse, completely uncool, but if you want to have success with online dating apps, just write something honest. If you're the kind of person who's going to engage, then engage. There's so little actual communication on these apps, which is why it's the best when someone actually wants to talk. Because that's the point.

And even though I swipe through and make fun of the most hilarious Tinder profiles for the sake of comedy, I truly believe that most people out there are inherently good, even the ones with the most ridiculous profiles. Most people want to connect. And most people have the ability to do so, if they can loosen up, laugh at themselves, and quit trying to act so damn cool.