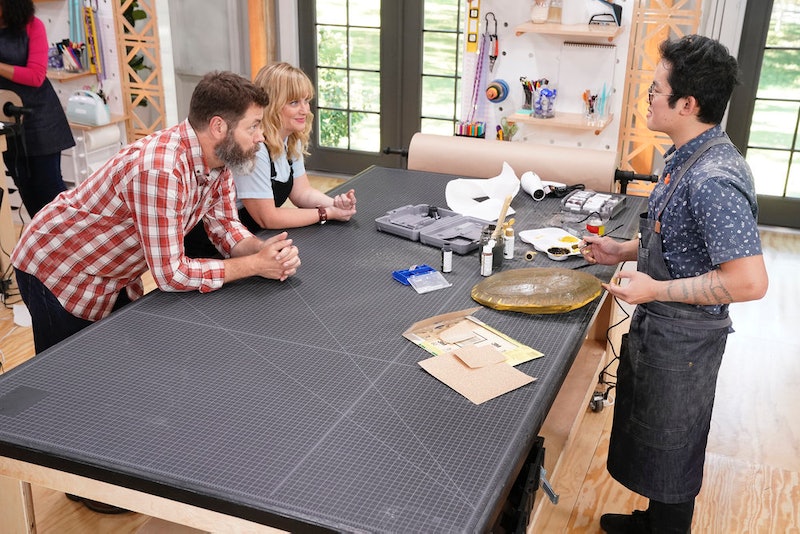 I’m a crafter. I know my way around a hot glue gun, and have blown through many a Michael’s gift card. So it was with some trepidation that I approached Making It, NBC’s new crafting competition show hosted by Amy Poehler and Nick Offerman. Putting the words “crafting” and “competition” together felt like an oxymoron.

Creative Competition Shows are about work, and are almost always directly linked to a contestant’s life and livelihood outside the show. Each one, from Project Runway to Top Chef, trots out a collection of participants who are almost-but-not-quite at the top of their game, gives them increasingly difficult tasks to do in a time limit that seasoned professionals would blanch at, and then judges them mercilessly on their inability to reach industry standards with poor materials, little sleep, and even less time. While each show offers cash prizes, the real prize is a job in their chosen industry. Even the most subversive and irreverent of these shows, RuPaul’s Drag Race, is not immune: drag queens who only last half a season can get more work than those who never appear on the show in the first place.

It's a ruthless format that prizes perfection over the actual joy most of these people probably once had when they initially entered their industry of choice, and it just didn't seem like the right fit for a show about something as soothing as crafting. So you can imagine my relief when Making It threw all that competitive nonsense out from the get-go.

To craft in the age of mechanical reproduction is to revel in the idea that you’re making something by hand.

Often, crafting is thought of as a hobby, an archetypal “labor of love.” This is not to say there’s not a crafting industry; Martha Stewart built an empire out of knowing how to glue scraps of paper just so. But unlike the fashion industry or the world of four-star restaurants, crafting is not really about the results. It’s about the process. A certain amount of imperfection is even desired among crafters. To craft in the age of mechanical reproduction is to revel in the idea that you’re making something by hand. Knots and whorls in wood are left in, stitches are left visible, edges are left rough. The point is less to make something beautiful than it is to just make something, with beauty being an appreciated side effect.

How do you make a Creative Competition Show about the joy of process? The first step seems to be abandoning the idea of wringing tension out of something that’s by its very nature relaxing.

The easy chemistry of hosts and former Parks and Recreation co-stars Amy Poehler and Nick Offerman provides the template for show’s tone. They gently quip back and forth, seeking not to intimidate the competitors a la Heidi Klum or Tom Colicchio (which, to be fair, IS good television), but to create a sense of camaraderie.

The contestants on Making It are creative and talented, but they load their hot glue guns one stick at a time. They are there not to impress the viewer, but to inspire them.

The stakes are remarkably low, and no effort at all is given to make them what they aren’t. Sure, people get kicked off each episode, but they’re just going back to their already fairly successful careers — be they in crafting full-time, or being an interior designer while indulging in some after-hours crafting for the kids. Not only is no one looking for a job, but the prizes given at the end of the episode are nothing more than a patch to put on the contestants’ aprons. This a step up from Making It’s spiritual sister, The Great British Bake Off, where winning contestants get a smile and polite applause.

Of course, there is a large cash prize for whoever the winner is, but the show seems almost embarrassed about it; at the beginning of each episode, Poehler notes that “we’re not going to make a big deal” about the money.

“The real prize is a job well done,” Offerman adds, lest you think I was mistaken in Making It’s focus on process.

Even the judging is dismissive of perfection. While judges Dayna Isom Johnson and Simon Doonan greet the denim-aproned contestants like alien ambassadors from a delightfully glam planet, they are crafters in their own right. They understand the difference between unpolished and purposeful. The crafters are rewarded not for being perfect, but for expressing who they are. One contestant is routinely criticized for making things that are “too chic” without any personality. Another’s cartoony aesthetic is only given poor marks when his pieces don’t come together to support a larger vision.

With contestants working in wood and felt and fabric and paper and… pool noodles, judging could have been a nightmare. How do you compare a carved turtle shell to a cardboard shadow puppet theater? To Johnson and Doonan’s credit, they don’t. Each piece is looked at individually, taking the artist’s personal style into account. Like other Creative Competition Shows, technique is highlighted, but Making It is here to educate you. Rather than assume you can tell decoupage from trapunto, definitions flash across the screen.

Which may be the most revolutionary act of the entire show. Creative Competition Shows thrive on a certain “best of the best” quality. Being a contestant on the show implies that you’re better than the rest, far above others in their field, not to mention the viewer at home. Making It goes out of its way to point out the things people could do with their own craft supplies. The contestants on Making It are creative and talented, but they load their hot glue guns one stick at a time. They are there not to impress the viewer, but to inspire them.

It certainly worked on me. The holiday episode alone has me already planning a Halloween display for my front door.

It will always be appealing to watch someone skilled do their thing. But it’s nice to see that the worst aspects of these shows — the manufactured tension, gimmicks that take away from the demonstration of skill, and dystopian undercurrent of competing for a job on live television — aren’t necessary parts of the formula. Sometimes, you can just sit back, relax, and watch someone transform a pile of raw materials.

More like this
What’s New On Netflix: 'Never Have I Ever' & 'Indian Matchmaking' Return
By Arya Roshanian
Everything To Know About The HBO Max & Discovery+ Streaming Service Merger
By Brad Witter
What’s New On Netflix: 'Bridget Jones’s Diary' & 'Monster-in-Law'
By Arya Roshanian
Kathy Hilton Awkwardly Misidentified Lizzo As Precious On Live TV
By Jake Viswanath
Get Even More From Bustle — Sign Up For The Newsletter