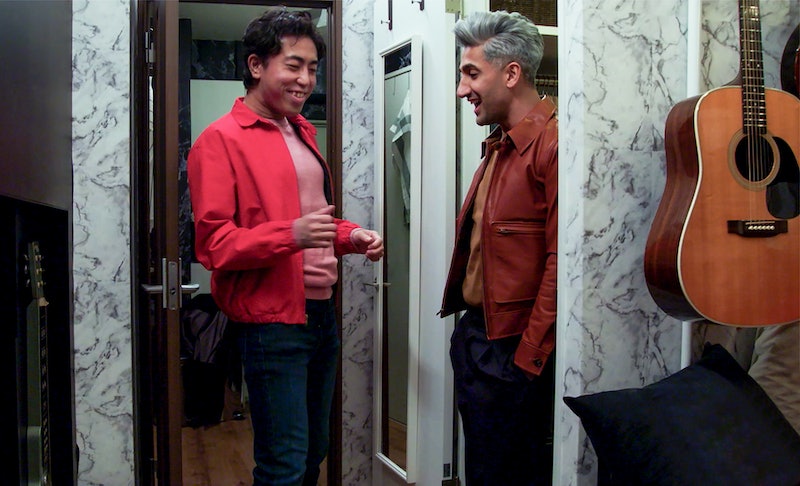 Spoilers ahead for Episode 4 of Queer Eye: We're In Japan. When Queer Eye's Fab Five met 37-year-old Makoto, he was incredibly timid, living a chaotically disorganized life, and losing touch with his marriage. But thanks to the guys, he was able to reconnect with his wife and rediscover his old passions. Now, Makoto and Yasuko are still together — and Makoto is more confident than ever.

"Jonathan told me to say 'I'm handsome and I’m deserved to be loved,' in front of the mirror every morning, and at least two months, I made it practice," he tells Bustle via email. "Thanks to this, I don't shrink myself even outside of the house. This is just a small change that I don't need to walk with [my] shoulders hunched."

Though Bobby Berk transformed Makoto's cluttered apartment, Antoni Pirowski helped him crack his first egg, and Tan France reinvigorated his closet, he says that this small daily practice has been "the biggest change" in his life, which is a testament to the power of a few simple words.

Now, he can walk with his shoulders straightened and his head held high, and he's even making music again. The radio director's cramped closet was stuffed with dusty instruments when the Fab Five arrived, and they encouraged him to revisit his passion. It looks like he has. On Oct. 28, he shared a new EP called "Life in Tokyo" and Yasuko even sings on it.

Makoto's Instagram confirms that he's quite the visual artist, too. It's full of graphic designs, embroidered hoops, drawings, and a photo of the organs graphic tee he made that Tan found in the episode. He also recently shared a drawing of the Fab Five, thanking them for visiting Japan.

"Thank you Fab 5!" he captioned the post. "From Makoto & Yasuko. Come to Japan again! with love."

At the beginning of his episode, Makoto said that he hoped the Queer Eye experience would make him "change from a rock into a psychedelic flower," and he has definitely blossomed.