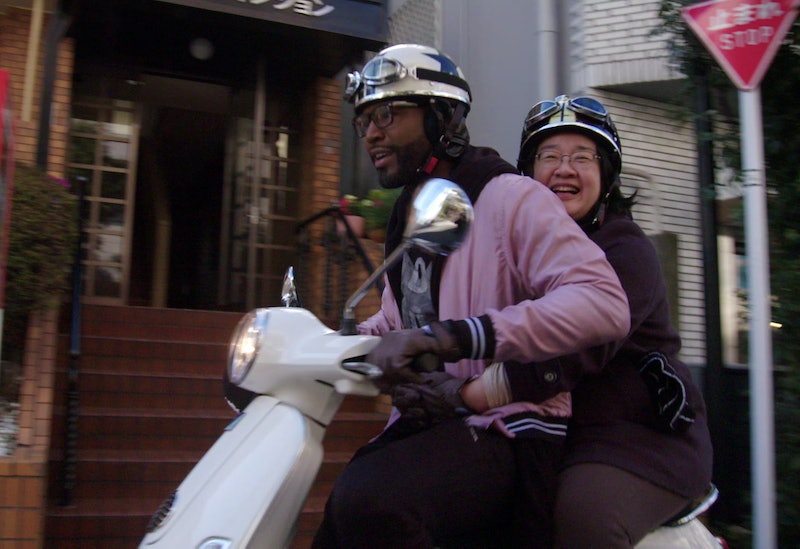 Spoilers ahead for Episode 1 of Queer Eye: We're In Japan. The first episode of Queer Eye: We're In Japan features one of the Fab Five's sweetest heroes yet: Yoko, a 58-year-old nurse who transformed her home into a hospice for the sick and elderly. Before the guys met her, she was so dedicated to her mission of providing for others that she forgot to practice self care — so much so that she didn't even have her own bed. But fans will be happy to know that since her Fab Five makeover though, Yoko says she sees herself as "a whole new Yoko."

As explained in the episode, Yoko began her journey of turning her home into a hospice — as well as building a community center, Kuma-Chan House, next door — after losing her sister to an illness. Yoko hated the thought of her sister dying in a sterile hospital without the warmth of a home, so she created spaces where people could feel a sense of companionship and belonging, and does everything from providing food and bedding to costumed entertainment for her guests. But Yoko's hard work absorbed all of her time and energy, and it took the guys much needed pep-talking and primping for her to remember that taking time for herself isn't selfish, but very necessary.

The latest update from Yoko is that she's still plugging away at doing the good work, but she's finally in a place where her business is growing. "I still work in hospice care, helping people suffering from ailments and disabilities. But now, I have the support of staff, so my working time has decreased," Yoko tells Bustle via email. "That means I can spend more time for myself! Yasss!!"

Thanks to Tan's stylishly mature new wardrobe and Jonathan's makeup tips, Yoko writes that she sees "a whole new Yoko - inside and out." Most excitingly, she reports that she is "also now dating and looking for someone who can hold my hand."

As for the community house, it's still going strong. "The Kuma-Chan House is energetic and lively now. Though I am still surprised by how different it all looks, I feel so comfortable living in the new space," she says.

As Bobby Berk told Metro, "teaching people self-love and self-care and acceptance is universal," and seeing that play out with Yoko, her friend Fumiko, and her community made it probably his "favorite episode" they've ever done. Clearly, it left an impact on Yoko too.