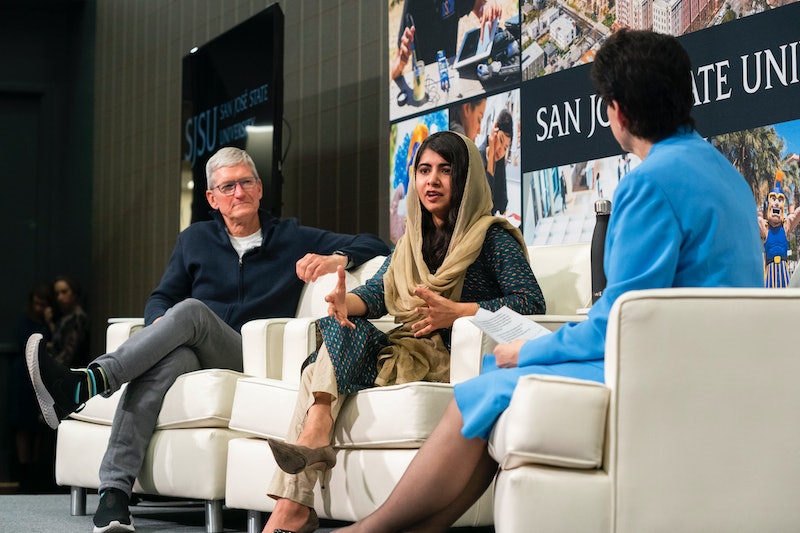 Nobel Peace Prize Laureate Malala Yousafzai may be one of the most well-known activists in the world; Apple CEO Tim Cook may be the most well-known figure in tech. Apart from their worldwide influence, you might not think the 59-year-old and 22-year-old have that much in common, but as they told a panel at San Jose State University (SJSU) on Dec. 12, through an ongoing collaboration between Apple and the Malala Fund, they've seen how joining forces with people who are different from you can make you both more powerful.

"When you have more minds at the table, it helps to deliver better results," Malala tells Bustle.

Tim Cook noted during the panel, which focused both on the financial and programmatic support Apple is providing the Malala Fund, as well as how young people can change the world, that the energy and optimism of the younger generation — Malala’s — are what gives him hope for the future. That doesn’t mean boomers are off the hook: During the panel, he said he doesn’t “excuse” his generation from taking action just because they’re older. “We have a lot to offer and a lot that we should offer, so I’m pushing along the way,” Cook said.

“We want activism and support from every generation, to work on a better and more prosperous world for everyone,” Malala says. “That’s the hope that we have for a more sustainable world — [one] that everybody engages in. Whether that’s the business sector, the government sector, the NGO sector, the entrepreneurs. I think all of these people should play a part.”

Malala says her decision to partner with businesses like Apple, rather than only with other non-governmental organizations (NGOs) and governments, is just one of the ways her organization is taking a new approach to tackling change. The Malala Fund works directly with local partners on the ground in each country where they have programming in order to ensure the solutions they’re working on are actually useful for that region.

“What we have learned is that it’s really, really important to work with local activists and local advocates in education,” Malala said during the panel. “Sometimes you can be sitting in a small room with amazing experts, incredible people, coming up with solutions. But they’re solutions that may not work. Why? Because we don’t know the local challenges and how the community will react to those solutions.”

Malala told the panel she lets her partners guide the organization on “what’s working and what’s not working.” For example, the Malala Fund works with a group in Syrian refugee camp in Lebanon that developed an entire e-learning platform that runs on solar power; it's designed to help girls who had to pause their education catch up, even if they don't have access to electricity or internet. But in Afghanistan, Malala says, the focus is less on developing new tech and more on changing perspectives about girls’ right to get an education in the first place. Different communities, different problems — different solutions.

That focus on working on a local level is one of the reasons Cook decided to bring Apple on board. “Particularly in education, this is so essential — because education is so local,” he told the panel.

Looking to the next decade, Malala is excited about the recent surge in youth activism at both the local and international levels. She’s especially enlivened by young women like activists Emma Gonzalez and Greta Thunberg who are standing up for what they believe in.

“I know there are so many girls out there whose names we will never, ever know,” Malala told the panel. “But they’re changing their communities. They’re taking huge risks. I want to be with those people. I want to support those people.”

And while taking a stand might seem daunting, Malala told the panel that she hopes young people realize they “don’t need that much to become an activist.”

“I started speaking out when I was 11 years old. I did not stop myself. I knew that, even if nobody listens, I will do my part,” Malala tells Bustle. “We’re often told that you have to grow up, get an education, get a job. [Then], in your 50s and 60s you can be able to change the world. I think we have to challenge that concept.”