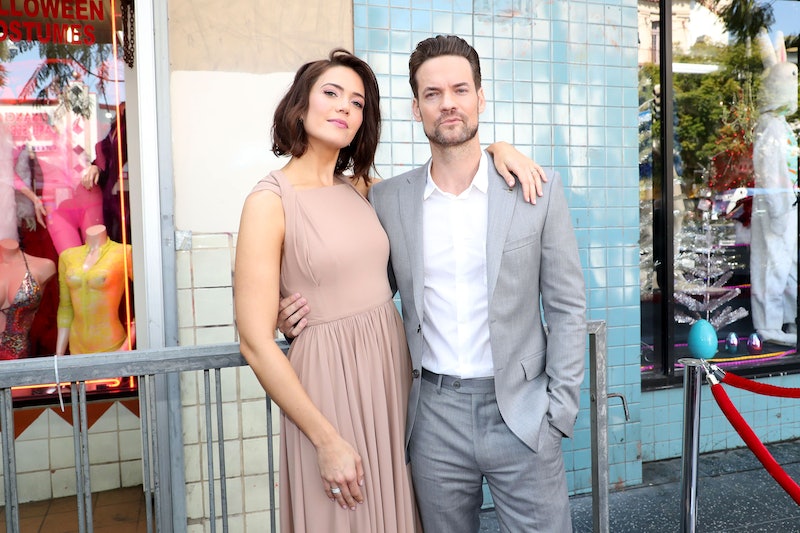 Before there was Jack and Rebecca Pearson on This Is Us, romantics all over the world fell in love with Jamie Sullivan and Landon Carter in A Walk To Remember. So when former co-stars Mandy Moore and Shane West reunited on Monday, March 25, you better believe it earned some much-deserved attention. West came out to support Moore as she received a star on the Hollywood Walk of Fame and gave a speech about his longtime friend and colleague, reminiscing about the time they first met over 17 years ago.

"We could not have been more opposite when we met," West said in his speech to Moore. "I was busy wearing ill-advised clothes and having dubious hair choices and eye-liner in my garage punk band — or whatever that was — and you were killing it on the pop-star scene." He also recalled that their taste in music couldn't have been more different at the time: "I was trying to get you to listen to the Clash and the Ramones. You were not interested but you were very sweet about it. You stuck to your Fleetwood Mac, always Fleetwood Mac.”

But despite how little they had in common, he couldn't be more grateful to the movie for bringing such an amazing person into his life. "Not only was this film a wonderful experience in every way, it also gave me the chance to fall for this fantastic woman," West continued.

The actor then ended his speech with a few parting words that will undoubtedly make your rom-com-loving hearts melt. He concluded:

"Mandy, you’re an absolute gem. Your smile is ridiculous — seriously, it’s ridiculous; it lights up a room when you walk in. Your energy is irresistible and your heart is second to none. I always knew you were incredibly talented and I always knew you were going to go on to do big things and amazing things, and you have… I couldn’t be more proud of you. I couldn’t be more happy for you."

For her part, Moore had equally nice things to say about West during her own speech at the ceremony, calling him "exceedingly patient, kind and so talented." She later added: "Honestly, none of us knew that project would have the reach and resonance it's had over the years, with new generations discovering it and falling in love with a story that will forever hold a very special place in my heart."

However, if that alone isn't swoon-worthy enough for you, West also made a point of posting a throwback photo of him and Moore on his Instagram story during their early years of working together on the set of A Walk To Remember, alongside the caption: "Today's a special day for this special gal..."

Meanwhile, not to be outdone, Moore also post an Instagram side-by-side photo of the two of them recreating their Walk To Remember pose, along with the caption: "Stars have always sort of been our thing. Thankful to @theshanewest for his kind words on this very special day, one which I will never forget. It was a walk (of fame) to remember."

Seriously, these two are beyond adorable and, as Moore put so astutely, this is one (Hollywood) walk (of fame) to remember and we, as fans, won't soon forget it.