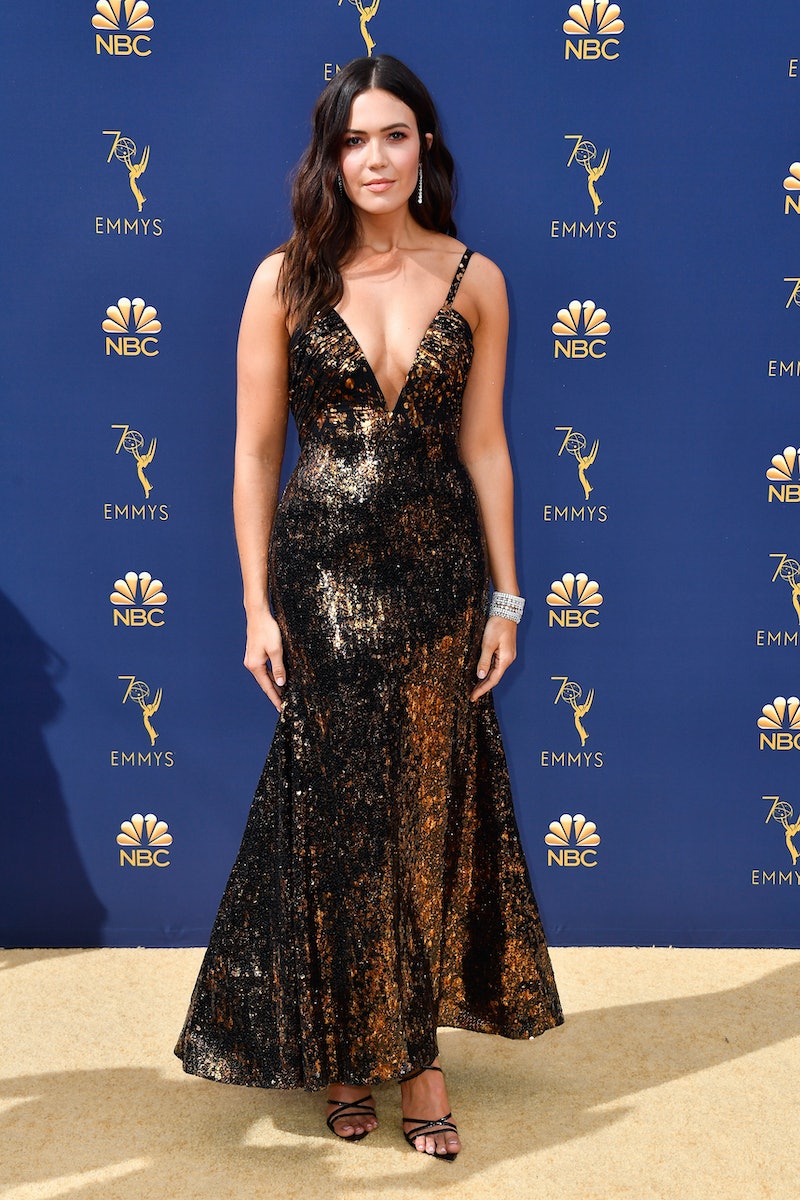 Fans were not happy when actor Mandy Moore was snubbed by the 2018 Emmys. She wasn't nominated for her critically acclaimed work as Rebecca Pearson on This Is Us. However, the lack of an individual nomination didn't stop Mandy Moore from looking like a vision at the 2018 Emmys. She showed up at the ceremony in golden and glorious fashion.

Yes, her legion of diehard and dedicated fans continues to be vocal about how deserving the star is of a nomination for her portrayal of the Pittsburgh mother and widow. You can't help but love them for their support. However, Moore remains a gorgeous picture of grace and class when navigating awards ceremonies such as this.

Moore's sparkly, ankle length dress was a custom Rodarte. It was a rich, coppery color and boasted a deeply dipping V that offered a sexy, peek-a-boo touch.

But the fabric mimicked molten metal and liquid gold. Moore stated that she felt both "pretty" and "lucky" to be wearing it during her E! red carpet interview.

The star wore her long, chocolate brown locks loose, wavy, and as though she just came from a dip in the ocean and a day at the beach.

Moore's sartorial choices at Hollywood awards shows are always top quality. She isn't afraid to go with pops of color or to rock basic black with a twist. She's never trendy — but her red carpet looks always have a modern element to them. She is always chic. Moore doesn't go for outrageous or unexpected but there's usually something about her presentation that is decidedly memorable. The shade-shifting dress and that effortlessly messy down 'do were her "Wow!" moments at the 2018 Emmys.

Moore's 2017 Emmys ensemble was a strapless and tiered black dress. It had one white layer and a Cinderella feel, thanks to the fullness of the skirt. The splash of white elevated her outfit and prevented it from being a simple and formal black dress. She paired it with a swipe of hot pink lipstick that basically acted as her makeup. The rest of her face was neutral and almost bare, but the bold pink lip was glam AF.

Flashback to the 2016 Emmys when Moore wore another tiered, floor-skimming gown. This tangerine confection boasted delicate ruffles, which added so much dimension. The halter neck had a '70s vibe, while her loose, beachy waves and glossed, orange-slicked lips were an excellent complement.

While Mandy Moore didn't take home a golden statue at the 2018 Emmys, she still made quite a statement with her ensemble.

If you want to copy Moore's coif, here's how her stylist Ashley Streicher achieved this beachy 'n' bedhead look. According to press materials received by Bustle, Streicher air-dried and treated Moore's mane with anti-humidity smoothing milk. She next misted it with texturizing spray and used a small round brush to do a wavy blowout. Streicher also added some tape-in extensions in different shades for dimension. She used the large 1.5" barrel of the T3 Twirl Trio for "a crimped wave technique" and alternated with the small 1" barrel to wrap and twist hair for that "just from the beach" vibe. Streicher finished with a dry texture spray and finger styling.

You may not be able to rock a custom Rodarte gown. But you can copy Moore's Emmy strands.