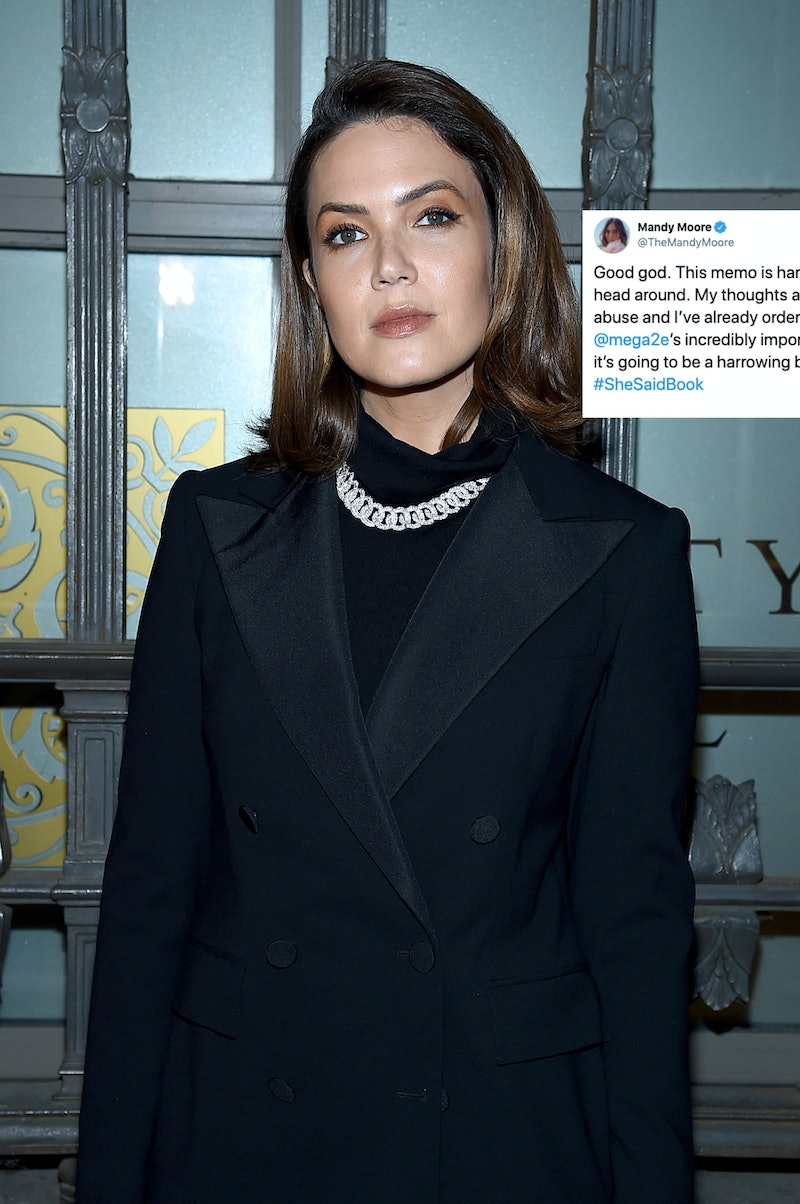 On Sunday, Sept. 8, a memo attorney Lisa Bloom sent to Harvey Weinstein nearly three years ago began to make headlines. In the December 2016 memo — which is excerpted in the new book She Said by New York Times reporters Jodi Kantor and Megan Twohey (they broke the October 2017 story about Harvey Weinstein's sexual misconduct allegations) — Bloom asked for Weinstein's help in discrediting one of his many accusers, Rose McGowan. Now, plenty of celebrities are responding to the news. Even Mandy Moore reacted to Bloom's memo on Twitter on Sept. 10 and expressed shock over Bloom's words.

"Good god," Moore tweeted. "This memo is hard to stomach and wrap your head around. My thoughts are with all victims of trauma & abuse and I’ve already ordered @jodikantor and @mega2e’s incredibly important Book 'She Said'. I think it’s going to be a harrowing [but] necessary read."

Like the This Is Us star, Busy Philipps also tweeted disgust over Bloom's memo and shared on Tuesday, "Having a hard time finding the words for the Lisa Bloom memo. Stunning? Sickening? Gut wrenchingly awful?? Rage inducing? Not to mention, how beyond horrible if you are a victim she currently represents and you read this memo. Also. Buying 'She Said' today."

You can read the memo in its entirety below courtesy of New York Magazine and Huffington Post contributor Yashar Ali. In it, Bloom wrote to Weinstein about McGowan, "I feel equipped to help you against the Roses of the world, because I have represented so many of them. They start out as impressive, bold women, but the more on presents evidence, the weaknesses and lies are revealed." Bloom has represented many victims, including most recently four of Jeffrey Epstein's accusers. (Epstein was indicted in July for allegedly sex trafficking girls between 2002 and 2005. He was found dead in a New York City jail on Aug. 10.)

Bloom continued to claim about McGowan in her memo, "She doesn't seem to have much going on these days except her rapidly escalating identity as a feminist warrior, which seems to be entirely based on her online rants." Bloom also wrote, "We can place an article re her becoming increasingly unglued, so that when someone Googles her this is what pops up and she's discredited."

McGowan responded to Bloom's memo on Sept. 8 and tweeted, "The evil that was perpetrated on me and others was mind bending and illegal. Lisa Bloom should be disbarred."

Bloom previously represented Weinstein, but she eventually dropped him as a client in October 2017 and apologized for representing him. According to the Los Angeles Times, Bloom partially said, "I feel very bad, because so many people have said that they really looked up to me as this champion for women and now I’ve been shown to be their champion, and it’s hurtful to them. I’m sorry."

In light of the memo, Bloom also apologized again on Twitter on Sept. 8. "While painful, I learn so much more from my mistakes than my successes," she wrote. "To those who missed my 2017 apology, and especially to the women: I am sorry. Here are the changes I've made to ensure that I will not make that mistake again."

Handmaid's Tale actor Bradley Whitford responded to Bloom's latest apology by tweeting on Sept. 8, "'Mistake'? Forgetting to pick up the laundry is a mistake. Using your experience with victims of sexual assault to undermine the credibility and perpetuate the suffering of a woman victimized by a serial rapist is evil, @LisaBloom. Apology not accepted." Oscar winner Patricia Arquette also tweeted on Sept. 9 in response to Bloom's apology: "When the first woman went on record accusing him you resigned? Because you knew it would impact you badly? Wow. The Roses of the world deserve better."

As for Weinstein, he previously denied all sexual misconduct allegations and pled not guilty to sexual assault charges. He's supposed to head to trial in January 2020. Before Kantor and Twohey's October 2017 article about Weinstein was published, the film producer reportedly reached settlements with several women, including McGowan.

According to NBC News, Weinstein also commented on She Said through his attorney and said, "'She Says' is all you need to know to appreciate that this book contains one sided allegations without having adequately investigated the facts of each situation. There is very different side to every story."

She Said might not be easy to read, but the book already sounds like it's going to be a success for all the right reasons. Based on many tweets, including those mentioned above, plenty of individuals support Kantor, Twohey, and their work in giving a voice to victims everywhere.