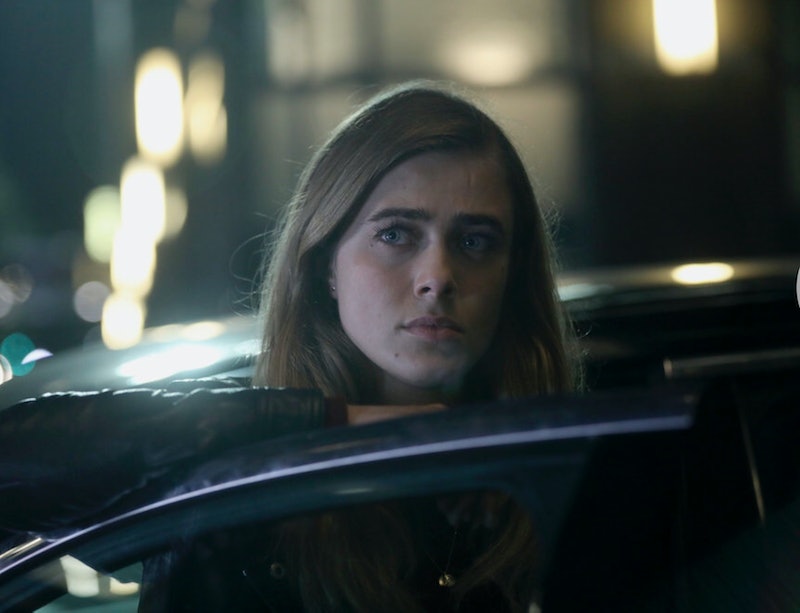 Between chemically altered bloodstreams, strange psychic powers, and inexplicable time-traveling, the passengers of Flight 828 have a lot to make sense of on NBC's Manifest. Yet somehow, none of those are the biggest mystery on the show. In the second episode of the new drama, the youngest passenger of the plane, Cal, is shown drawing a mysterious figure in the background of an otherwise normal family portrait. And it hasn't taken long for theories about Manifest's shadow monster to start rolling in.

One possibility is that it's not anything supernatural, but just the result of a young boy's imagination. Perhaps the figure represents Cal's mom's boyfriend, who she began dating during the five-plus years Cal and his dad were missing. She's obviously having a difficult time grappling with the return of her husband, who she still loves, while being in a relationship with someone else that's still important to her. Maybe Cal picked up on that and realized there was (literally) someone else in the picture.

Compared to the alternatives, though, that theory is quite tame, and many viewers are convinced it has to be something more. Just before Kelly Taylor, another one of the passengers, was shot and killed, a figure that looked suspiciously like the one Cal drew was seen creeping into her home. This has caused some fans to believe the same monster from Cal's picture was directly responsible for her death — even despite the fact that a woman who was taking care of Kelly's husband was ultimately taken in as a suspect. (Her exact relationship with him isn't specified, but it's possible she was his maid).

"I'd just be SO disappointed if the shadowy figure we saw was supposed to be that maid!" wrote Reddit user KellyKeybored. "Are we supposed to assume that Cal was including the maid in his drawing of his family? NO way. If anything, the shadowy figure may have had something to do with 'telling' the maid to shoot and kill Kelly."

Others think that even if Kelly's murder is completely unrelated to the shadow monster (which would seem highly coincidental, for the record), there's definitely something else going on with Cal's drawing that will become a bigger plot point as the story unfolds. "I don't think the shadow person thing is done yet. They didn't include Cal drawing that shadow person for nothing," wrote another Redditor, cocacola150dr. "I don't think the maid is the person Cal drew, they just wanted you to think the two were related."

So far, Manifest hasn't given us a lot of clues to work with, but whatever the shadow monster is, it's clear Cal is connected in some way. It also seems like the figure may have at least influenced Kelly's murder, if not outright caused it. Is it a strange opposition to the voices passengers are hearing, telling them to do good in the world? Is it part of a plan orchestrated by the government? There are way too many moving parts right now to know anything for sure, but if you watch closely, the easter eggs should keep on coming.