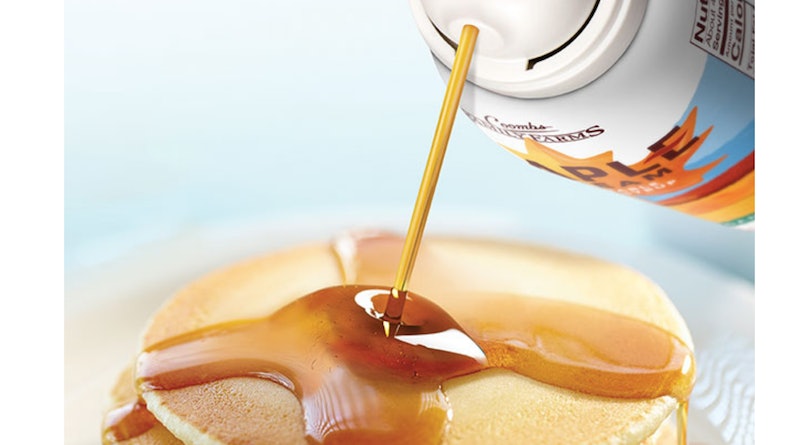 And today in Things I Didn’t Know I Needed, we have this: Maple Stream, an invention from Coombs Family Farms which actually makes maple syrup sprayable. I know, I know — it sounds kind of… odd. But, I mean, think about it: How many times have you meant to drizzle just a smidge of maple syrup on your pancakes or waffles and accidentally ended up flooding your plate with half the jug? I mean, there’s nothing wrong with a flooded plate if that’s how you like your breakfast — but if you’ve ever had that happen and found yourself flapping your hands and yelling “OH NO TOO MUCH,” then the Maple Stream is for you.

(And by “you,” I mean me. It’s for me. That person suffering from a recent pancake disaster and desperately searching for a solution is me.)

Based in Brattleboro, Vt., Coombs Family Farms has been in the maple business since the late 1800s and certified organic since the 1980s. They’re known for their syrup, of course, but they also offer a handful of other maple-based products: Candy made from a recipe that dates back to 1925, and straight-up maple sugar. (If you've never had maple candy, you have not lived. Just sayin'.)

But just because they’ve got deep roots doesn’t mean they’ve stopped innovating — which is where the Maple Stream comes in. The syrup itself is Coombs’ classic Organic Grade A maple syrup, but the packaging is the thing to note here: A 7-ounce, recyclable can, it “streams out mess-free, portion-controlled organic maple syrup” at the push of a button, according to a press release. It made its debut during the 2018 Specialty Food Association’s Summer Fancy Food Show, which was held at New York’s Javits Center between June 30 and July 2 — and now it’s actually available for purchase at a suggested retail price of $7.99.

I’ll confess that I was somewhat skeptical at first of the idea of “sprayable maple syrup” — but that was before I learned exactly what “sprayable maple syrup” is. Initially, I was imagining a standard atomizer — the kind of bottle in which, say, I Can’t Believe It’s Not Butter Spray is typically packaged. But the Maple Stream functions less like faux butter spray and more like silly string (although it’s also worth noting that, unlike your typical silly string can, Maple Stream doesn’t have any flammable components). The syrup doesn’t come out of the nozzle as a fine mist; it’s still a satisfying-looking stream — hence the product’s name. The dispenser just gives you more control than a jug or a squeeze bottle does over how much syrup actually comes out.

Neat, right? I can also see it being useful in all sorts of other situations beyond breakfast. It’ll certainly make measuring out precise amounts of maple syrup for use in other recipes a lot easier, for example.

You can use Coombs Family Farms’ product locator to see if any retailers near you carry the Maple Stream in-store; if you strike out, though (I did), you can also find it online at places like Amazon. Just bear in mind that you might be buying from third-party sellers.