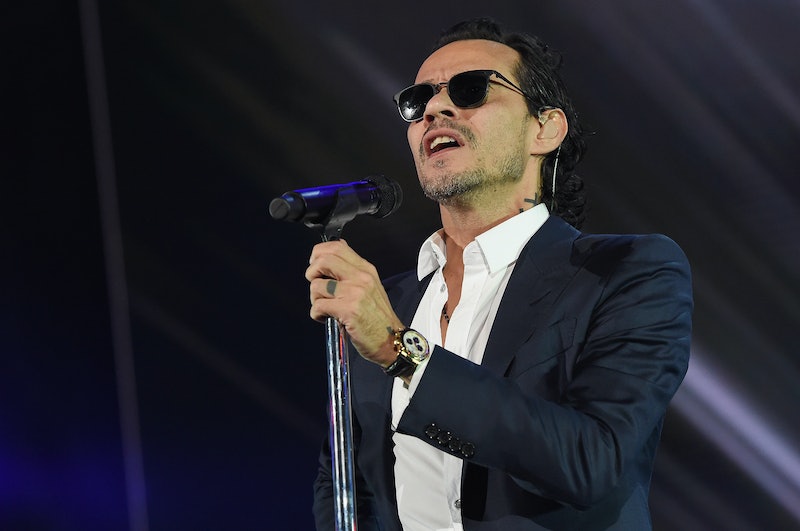 The upcoming film adaptation of Lin-Manuel Miranda’s hit Broadway musical In the Heights is already one of the most anticipated movies of 2020, and a huge burst of Latin star power has just been added to the film. Marc Anthony is joining the cast of In the Heights, as revealed by Miranda himself on Thursday, June 6, and his surprising role should make fans of the beloved musical even more intrigued about what’s to come.

Miranda first teased some major news in a series of tweets early on Thursday, before finally announcing the big secret. “Okay I actually can’t hold it in anymore,” Miranda wrote on Twitter. “Sonny’s father will be played by Marc Anthony. It’s a brief but pivotal role… And I still can’t believe it.” Neither can anyone else.

The news of Anthony playing Sonny’s dad is a huge deal, not only because of the involvement of a mega star like the singer, even in a “brief but pivotal role," but also because Sonny’s father was not seen in the original musical. The character seems to be a new addition for the upcoming film, meaning that we’ll get to see more of Sonny’s story and that there could possibly be even more new characters brought into the fold.

In the Heights, written by Miranda long before he created the breakout phenomenon that is Hamilton, was a sensation in its own right during its Broadway run, which began in 2008. The musical won several Tony Awards, including Best Musical, and now it's going to be a major motion picture. It follows a group of young adults in Washington Heights as they navigate love and life over the course of three blazing summer days.

While most things about the film have been kept secret, Miranda has confirmed a few key details about the plot, including that the story will be updated to be set in present day. "I mean, immigration was an issue in 2008," Miranda explained in an interview with Remezcla. "But when I think of Sonny’s lyric — you know ‘Politicians be hating / Racism in this nation has gone from latent to blatant.’ It’s more true in 2019, than it was in 2008.”

He also confirmed that the music will remain the same, and that the film will be shot on-location in Washington Heights, New York City, the setting of the original musical, with real-life residents serving as background actors. ” "I want this neighborhood to recognize themselves in this film,” he told the outlet.

Anthony joins a large star-studded cast, including Gregory Diaz IV, who will play his son, Sonny. Anthony Ramos will portray bodega owner Usnavi, the narrator of the musical and a role that Miranda originated on Broadway, while Mexican artist Melissa Barrera will portray Usnavi’s love interest, Vanessa. Also announced as members of the cast are Leslie Grace, who will take on the part of Nina, the main female protagonist, and Straight Outta Compton star Corey Hawkins, set to play her love interest Benny. Rounding out the already impressive lineup are Jimmy Smits as Kevin Rosario, Brooklyn Nine-Nine star Stephanie Beatriz as salon worker Carla, and Rent alum Daphne Rubin-Vega as salon owner Daniela.

The film is scheduled to hit theaters on June 26, 2020, so get your dancing shoes organized in advance.