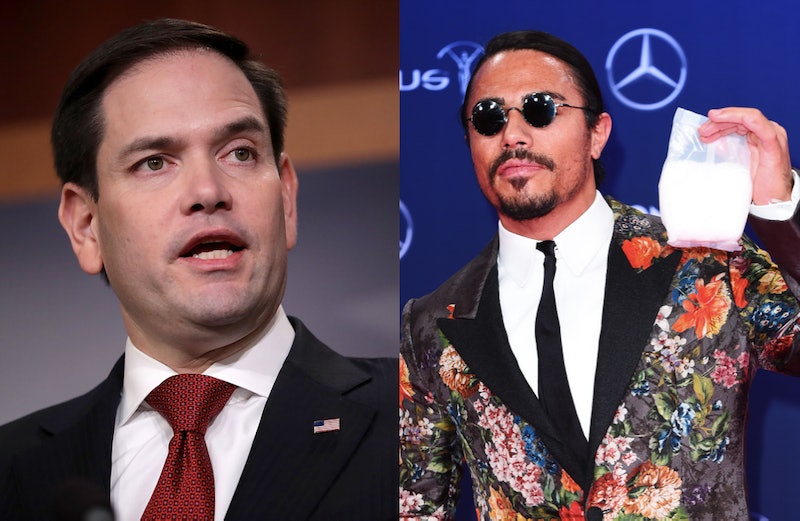 The subject of a famous internet meme seems to be in trouble. On Monday, Florida Sen. Marco Rubio blasted "Salt Bae" on Twitter — the restaurateur Nusret Gökçe — for reportedly posting a video of himself serving food to Venezuelan President Nicolas Maduro and his wife Cilia Flores. According to the BBC, the video was taken at Gökçe's Nusr-Et restaurant in Istanbul, Turkey.

In his tweets, Rubio noted that everyday Venezuelans were starving while their president dined at high-end restaurants such as Gökçe's. (Gökçe became a viral sensation in 2017 after videos showed him dramatically sprinkling salt over steaks.) According to Reuters, more than two million Venezuelans fled the country after increasing shortages in food. Rubio, who has vocally criticized Latin American despots in the past, went off on Gökçe on Twitter and pointed to the crisis in Venezuela.

Tweeting about Gökçe on Monday, Rubio said, "I don’t know who this weirdo #SaltBae is, but the guy he is so proud to host is not the President of #Venezuela. He is actually the overweight dictator of a nation where 30 percent of the people eat only once a day, and infants are suffering from malnutrition."

The Republican also blasted the famous chef's steakhouse on the same day by sharing its address and phone number with his followers on Twitter. Rubio finally ended his rant on a biblical note saying, "May those who seek to destroy my life be shamed and confounded. Turn back in disgrace those who desire my ruin. Psalms 40:15."

So far, Gökçe has not responded to Rubio's criticism. In fact, one of the tweets that Rubio retweeted from the famous chef is no longer available on Twitter. It's unclear whether Gökçe deleted it himself or Twitter moderators removed it presumably after mass reports.

Rubio may have been livid at Salt Bae and his apparent affinity for Maduro, but it also became evident that not all on Twitter agreed with the senator. Under his last tweet referring to the biblical verse, survivors of the February Parkland school shooting in Florida responded to Rubio. One of the student survivors named David Hogg rhetorically wondered about the biblical verse on bribery.

Another student survivor from the same shooting, Matt Deitsch, said on Twitter, "You shall not pervert justice. You shall not show partiality, and you shall not accept a bribe, for a bribe blinds the eyes of the wise and subverts the cause of the righteous" and added that Rubio "doesn't practice; [he] just parrots the Bible."

Although neither student clearly specified it, they may have been referring to the $1,012,980 the National Rifle Association gave Rubio, according to CNN. Over time, Parkland students have called Rubio out over the financial help he's received from the NRA.

Still, Rubio wasn't alone in his fury against Maduro. Venezuela's opposition party Primero Justicia also criticized the president. Julio Borges, a member of the opposition movement, said, "While Venezuelans suffer and die of hunger, Nicolás Maduro and Cilia Flores have a good time in one of the most expensive restaurants in the world, all with money stolen from the Venezuelan people."