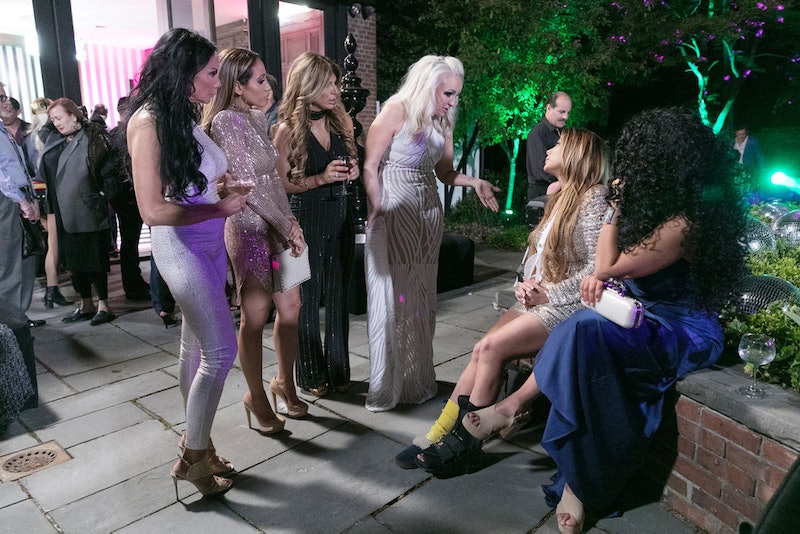 Friendships can be complicated, but they can be especially complicated when one of the friends is the bride and the other is in the wedding party. Even the kindest of brides can turn into a screaming, high-maintenance mess (been there), lashing out at the women who are supposed to be there to celebrate her big day. Such is the case with Danielle Staub and Margaret Josephs on RHONJ this week. Danielle is getting married one more time, and her demands on her bridesmaids are… excessive. It remains to be see if Danielle and Margaret are even still friends.

I’m not particularly of the mind that one can’t have a big wedding for a second or even third marriage. Relationships don’t work out sometimes. That’s just how it is, and no one should have to not throw themselves a big party the second, third, or even ninth time around. Danielle’s Bimini nuptials are fine — give me a destination wedding any day! — but it’s the way that she’s treating her bridesmaids that’s a bit much. Danielle demands on Real Housewives Of New Jersey that all of her bridesmaids must pick up her every call, every text, every smoke signal in order to give her the attention she deserves. Because she’s the bride. It's a lot and it's not a good look on a fifty-something who should know better.

Once the women (Teresa, Melissa, and Margaret) land in the Bahamas, Danielle demands a “cute” bikini photo shoot of the group. Margaret isn’t into it, because she doesn’t want to stuff her 50-year-old body into a bikini for posterity, as she says in her one-on-one. That's understandable.

Danielle can’t see the forest from the trees here, and she probably lost a good friend because of it, judging from their meltdowns and fights on the Dec. 19 episode and ensuing promo. The wedding wasn’t the only thing driving these two apart, but it certainly didn’t help matters.

As fans may know, Danielle’s marriage dissolved very quickly, and, according to Margaret, so did their friendship. She told Bravo’s The Daily Dish podcast that she didn’t like the side of Danielle she saw at the wedding. “I tried to discuss it with her, and some people don't want to hear the truth, and I was very honest with her and I think that's a characteristic I have, I'm gonna tell you the way I feel and I can move past from it,” she said.” Margaret doesn't have bad feelings toward Danielle, though. At least, that's what Margaret told Us Weekly. “I wish her only good things and I don’t want any ill for anybody, I don’t want anybody’s life to unravel,” she said.

There’s no love lost on Danielle’s side, either. She recently told Page Six that her bachelorette party was planned with “malicious intent” and that she didn’t know Margaret would “take revenge” against her at the party. “I think Margaret did this whole thing to be anything but a friend to me,” Danielle said. “She did it to be provocative and it turned out to be just in poor taste altogether and really used against me.”

Danielle didn’t mince words with Us Weekly, either. “I think [Margaret]. Is 100 percent phony,” she told the magazine “She doesn’t have anything, she doesn’t bring anything, except for a loud mouth. I think she’s probably three seconds away from being an evil bitch. There you go!”

So, erm, suffice it to say that Margaret and Danielle are no longer besties. As Danielle would say back in the Real Housewives Of New Jersey day, we all just wish them love and light.