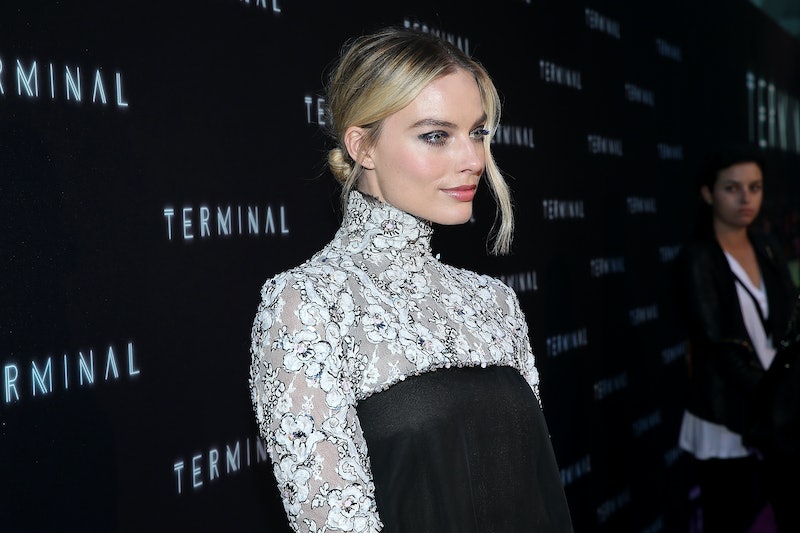 Even if fans will be anxiously awaiting another year to see the final product, they are loving Margot Robbie's first look as Sharon Tate in the upcoming film Once Upon a Time in Hollywood. Fans knew the Oscar-nominee would be an incredible choice to play the iconic, late '60s actress, and the first peek at her in the role has confirmed just that. Robbie looks strikingly similar to Sharon Tate, and audiences can't wait to see what she does with the bound to be epic role.

In the photo, Robbie channels Tate and poses casually, wearing natural makeup, straight hair, and donning '60s attire like white Go-go boots paired with a black, long-sleeve turtleneck and white miniskirt. Although Tate's name is sadly synonymous with Charles Manson after being tragically murdered by the Manson family in 1969, this will not be the focus of the Quentin Tarantino film.

Although many details about the film remain unknown, Robbie's first look at her character has audiences freaking out. Fans commented on the Instagram photo with remarks like, "Omg margot is in the film as well, this is going to blow our minds," "I’m so ready for this movie," and "I literally can not wait."

Fans are showing support and love for the actor on Twitter as well.

Fans are seeing so much potential, and many of them responded to the photo with hopes that the actor will snag her first Oscar for the role. Although the Australian native came into the entertainment business swinging with her performance in 2013's Wolf of Wall Street, it was really her role in last year's I, Tonya that earned her much deserved attention and respect. She was nominated for an Oscar for the role, and she won the 2018 Critics' Choice Award for Best Actress as well.

After Once Upon a Time in Hollywood premieres in July 2019, Robbie, who truly immerses herself in her roles, may even bring back iconic '60s fashion. Further, her role will probably spark a staple Halloween costume (just as she did after playing Harley Quinn in 2016's Suicide Squad). Thus far in her career, Robbie certainly goes for roles that make a statement. "Normally, I pick the roles that I kind of fight for," she told Empire magazine in March.

Once Upon a Time in Hollywood is anticipated to be an overall incredible experience. When teasing the film at CinemaCon in April, Tarantino said, "Street by street, block by block, we'll transform Los Angeles into the Hollywood of 1969." DiCaprio added promising remarks, saying, "As an L.A. native, having read the script, it's one of the most amazing screenplays. We are going to do our best job to make it fantastic." Fans have no doubt that it will be.