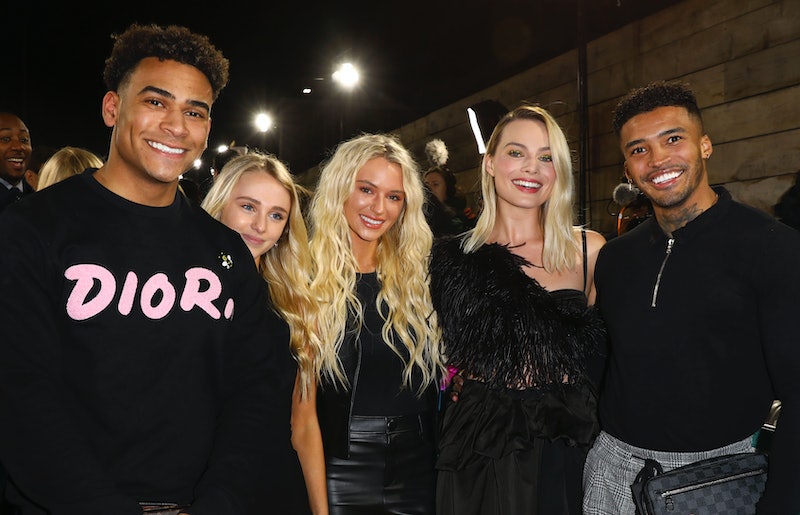 Whether you'd consider yourself a pro in all things Love Island or are keen to avoid it at all costs, the buzz around each season is unavoidable. For some TV stans, it's the highlight of their year and photos of Margot Robbie fan girling over Love Islanders makes it pretty clear which camp she's in.

Last night, while Robbie walked the bright yellow carpet at the Birds Of Prey London premiere, two entertainment worlds collided: Hollywood and reality TV. Proving that she's basically any of us, Robbie went straight over to former Love Islanders in attendance, Michael Griffiths, Lucie Donlan, and Jordan Hames and began taking selfies and joking around with the group, appearing to be utterly delighted by their "chat."

Robbie has confessed in the past that, despite her star power, she's just as taken in by Love Island as the rest of us. Speaking to Heat in July of last year, the actor admitted how excited she was when former islander Dr Alex mentioned her name during an episode. She even said at the time, "I'm behind on [the show] at the moment and it gives me anxiety."

Robbie is showing an entirely different side to Gotham City's most beloved bad girl in Birds Of Prey. Harley Quinn is coming out of her abusive relationship with the Joker and looking for a fresh start. Along the way, unable to avoid trouble, she meets a ragtag bunch of kickass women and together they wreak a whole bunch of havoc.

According to reports, Robbie actually pitched the idea for Birds Of Prey to Warner Bros back in 2015, inspired by her day-to-day life surrounded by amazing women. Speaking to Screenrant, she said: "It was crazy to me that I hadn't really gotten to be part of a female ensemble on screen."

Who knows, maybe the next time she's on screen with a bunch of female powerhouses it will be in the girl's dressing room on Love Island?