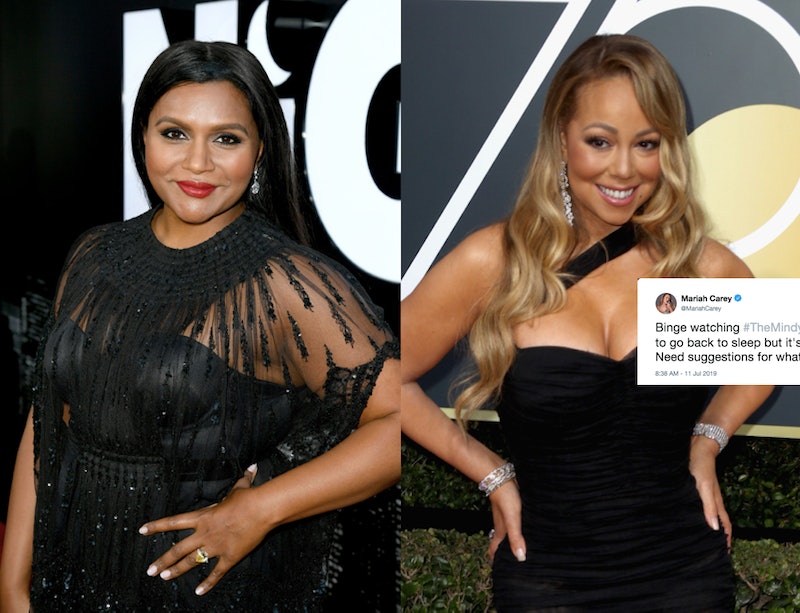 Everyone knows the thrill of watching a new TV show for the first time and discovering just how great it is. Usually the words that come out of everyone's mouths when they get hooked on a new show are, "Where has this been all of my life?" It's a familiar question, and one Mariah Carey, queen of R&B and basically everything, now knows all too well. In a tweet on Thursday, July 11, Mariah Carey praised The Mindy Project, her newest TV obsession, and Mindy Kaling's reaction to the newfound fan of her hit show was extremely adorable.

Carey tweeted in the early hours of Thursday morning that she started to marathon watch The Mindy Project because she couldn't fall asleep, but then found the show so funny that she wasn't able to go back to bed. "Binge watching #TheMindyProject! I'm trying to go back to sleep but it's too funny," she wrote, accompanied by the famous crying-laughing emoji (even queens use emojis). "Need suggestions for what to watch next!"

Perhaps she'll continue on this Kaling kick and follow up The Mindy Project with seasons of The Office, or Ocean's 8. For now, however, the singer seems pretty satisfied with what this sitcom has to offer.

Kaling, being an obvious fan of the legendary singer, saw Carey's tweet and immediately freaked out, as any normal person would. And, because she had to acknowledge the queen, she retweeted the praise, with a response to Carey. "I cannot with this!!," she wrote, accompanied with two heart-eyes emojis. "Thank you queen!"

Even though this was a major life moment for Kaling, this wasn't the first time that the two have interacted on social media. Back in June 2019, as Kaling was promoting her recent movie Late Night, where she starred alongside Emma Thompson, the comedian took to Twitter to share her favorite movies featuring her iconic co-star.

"You guys know, I’m the biggest #EmmaThompson stan. I’m so fortunate to have written a movie for both of us to act in (@latenightmovie out this Friday!) but had to bless you with some of my other fave performances of hers. BINGE WORTHY CONTENT," she wrote asking her followers what their own favorite Thompson moments are. Her picks included classic Thompson films like Saving Mr. Banks and The Remains of the Day, but a certain someone responded with a wacky answer of her own.

Carey responded to Kaling's question and gave a hilarious, yet completely relatable answer. "So hard to pick just one but I'm gonna go with Sense & Sensibility cause I have no sense or sensibility!," she wrote, (and honestly, same). She ended her sweet note by promoting the new film, adding, "Can't wait to see the new movie!" Perhaps if she hasn't gotten to it yet, Late Night should be next on the singer's watchlist.

Although they seem like a very unlikely duo, there's obviously mutual admiration between Carey and Kaling, both hilarious in their own right. Who knows, maybe these two ladies will star in a comedy together one day. Make it happen, Hollywood.

More like this
What Is Mary J. Blige’s Net Worth? The 9-Time Grammy Winner Is Doing “Just Fine”
By Hugh McIntyre
Austin Butler Recalls Lisa Marie Presley Showing Him Elvis’ Bedroom
By Jake Viswanath
You’ll Definitely Recognise Isadóra Bjarkardóttir Barney’s Mum
By Maxine Harrison
The Full EGOT Winners List: Only Viola Davis & These 17 People Are EGOTs
By Radhika Menon, Marina Watts and Grace Wehniainen
Get Even More From Bustle — Sign Up For The Newsletter
From hair trends to relationship advice, our daily newsletter has everything you need to sound like a person who’s on TikTok, even if you aren’t.