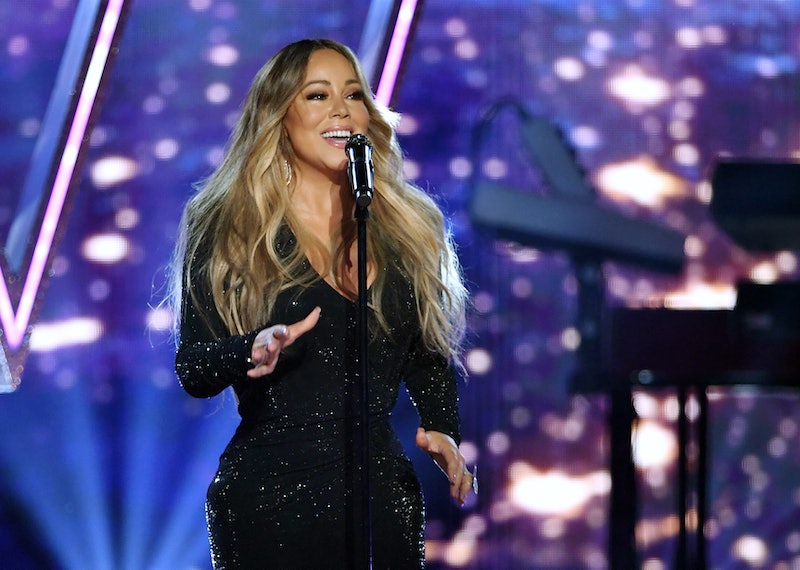 From Britney Spears vs. Christina Aguilera to Nicki Minaj vs. Cardi B, there's a long history of female feuds being perpetuated in music, and Mariah Carey thinks it's time that trend comes to an end. During an interview for Variety's "Power of Women" issue, Carey declared the music industry needs to stop making women compete — and she's not the only artist who's voiced that sentiment in recent years.

While speaking to Variety, Carey discussed several difficulties she's endured over the years as a woman in music, including feeling like she was treated differently than her male counterparts during her rise to stardom in the early '90s. As she became more successful, she found herself being compared to other female artists way too often, which is something that's still happening. When asked in the video interview what she thought needed to change in the industry the most today, Carey replied without hesitation, "The pitting of women against each other."

For instance, Carey recalled how she and Whitney Houston constantly dealt with industry-instigated competition early in their careers before they eventually recorded a duet (1998's Oscar-winning song "When You Believe") and realized they got along great. "She was one of the greatest of all time," Carey said in regards to Houston. "We had the best time working together... I think camaraderie with women that you respect is a huge deal."

Houston wasn't the only star Carey has been positioned against over the course of her lengthy career. More recently, Carey got candid about her short tenure on American Idol in 2013, when she and Nicki Minaj — who was also a judge at the time — were constantly making headlines about their rumored feud. "Pitting two females against each other wasn’t cool," she told The Hollywood Reporter years later regarding the way the show framed their supposed drama. "It should have been about the contestants instead of about some nonexistent feud that turned into even more ridiculousness."

Several other singers have also expressed this type of frustration in recent years, including Lily Allen, who admitted that she doesn't like "being put in the same category as people because we have the same genitals and boobs." She told Rolling Stone in 2014, "It feels like the reason we play women against each other is because it’s the last bit of power that men have. They’re like, 'Let’s make them feel sh*t about each other.'"

American Idol alums Kelly Clarkson and Carrie Underwood spoke out about similarly forced competition back in April 2018. After a Twitter poll circulated asking who was the "more iconic" American Idol winner, Clarkson replied, "I think we’re both winning in life and pretty blessed! Singers, mamas, CEO's [sic]." In return, Underwood admitted she voted for Clarkson in the poll and wrote, "But seriously, I do wish more publications would just celebrate women’s success without pitting them against each other."

As Carey, Allen, Clarkson, and Underwood have made clear, they don't want to be pitted against each other. Now, it's on the music industry to follow suit.

More like this
Twitter Is Identifying With Sally Field & Jane Fonda’s Friendship In New Viral Video
By Jake Viswanath
"Lavender Haze" Star Laith Ashley Breaks Down Filming With Taylor Swift
By Jake Viswanath
Cruz Beckham Teased New Music With An Adorable Nod To Mom Victoria Beckham
By Stephanie Topacio Long
Twitter Is In Awe Of Taylor Swift’s “Lavender Haze” Music Video
By Jake Viswanath
Get Even More From Bustle — Sign Up For The Newsletter
From hair trends to relationship advice, our daily newsletter has everything you need to sound like a person who’s on TikTok, even if you aren’t.