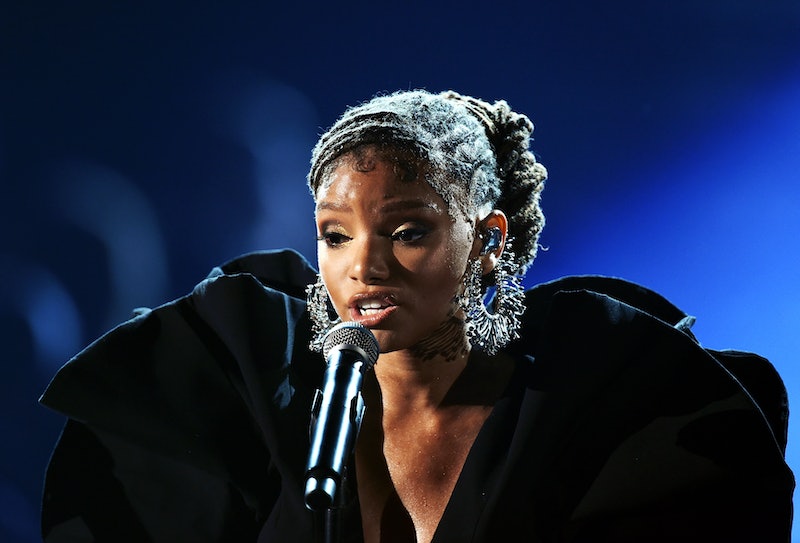 On July 3, Disney announced that Halle Bailey, of the singing sister duo Chloe x Halle, will play the starring role of Ariel in the upcoming live-action version of The Little Mermaid. As you can imagine, the internet basically exploded with excitement in the following hours as the casting news was circulating, and even Mariah Carey congratulated Halle Bailey on becoming the new Ariel. Bailey responded to Mimi's July 4 message on Twitter herself, and it's basically the sweetest exchange between two incredible women who inspire each other.

In Mariah Carey's tweet, she referenced her 2005 album The Emancipation of Mimi, saying, "Congratulations Halle!! My kids and I are so excited for the emancipation of Ariel." At the end of her tweet, Carey included an emoji of a mermaid that has dark skin to celebrate Disney's improving its representation to include a Black woman as the iconic Princess Ariel. Amidst an unfortunate onslaught of racist objections to Bailey's casting, Carey's message likely helped remind the "Happy Without Me" singer that she has a lot of support too — and from musical superstars no less.

In response to Carey's sweet tweet, Bailey responded with a retweet and comment on Twitter that said, "omg thank you so much [heart emojis] you are forever an inspiration."

Bailey is probably pinching herself over how far she's come from 2013 when she and her sister recorded a YouTube video of themselves covering Carey's 2014 song with Miguel, "#Beautiful."

It's no secret that Chloe x Halle respect the milestones that Carey has set with her singing career, as during the 2018 American Music Awards the Bailey sisters introduced the "Hero" singer's performance. Chloe called Carey "a music legend with 10 American Music Awards and she has 18 Billboard Hot 100 hits, more than any solo artist in music history." When her sister joined in to welcome Carey to the stage, she smiled broadly and looked genuinely excited. One can only imagine how she feels now that Carey's a fan of hers.

Carey isn't the only legend who has taken to Twitter to congratulate Bailey on being cast as a live-action Disney character. On Wednesday, July 3 Halle Berry tweeted her support towards a fellow "Halle," and Zendaya and Janelle Monáe did, too.

The casting of Ariel doesn't yet complete the upcoming Disney live-action film's roster, as the actor playing Eric hasn't yet been announced. What is known is that Lin-Manuel Miranda is both producing and writing lyrics lyrics for new songs, per Deadline, and Bailey joins Awkwafina, and Jacob Tremblay who have been cast as Flounder and Scuttle, respectively. Melissa McCarthy is in talks to play Ursula the Sea Witch, Variety reported, and additional casting news will likely come out soon.

As Deadline noted, this is the first feature film that Bailey will perform in, but both she and her older sister Chloe currently show off their acting chops on Freeform's Grown-Ish.

It's already publicly known that Bailey has the voice of an angel, and considering that Chloe x Halle was first signed to Beyoncé's record label Parkwood Entertainment, it's likely that the casting news has Bey's seal of approval. Carey's support certainly seems like it means a lot to Bailey, though, and so the former's Twitter message of encouragement is super exciting to witness.

More like this
Revisit 1992’s 'A League Of Their Own Cast' Photos After The New TV Series
By Grace Wehniainen
At 28, Lesley Manville Was Acting, Picketing, & Singing Kate Bush Songs
By Olivia-Anne Cleary
Reese Witherspoon Gave Fans Hope For 'Legally Blonde 3' After This Surprising Movie Inspired Her
By Jake Viswanath
Twitter Is At Odds Over Taylor Swift’s Possible ‘All Too Well’ Oscar Run
By Brad Witter
Get Even More From Bustle — Sign Up For The Newsletter