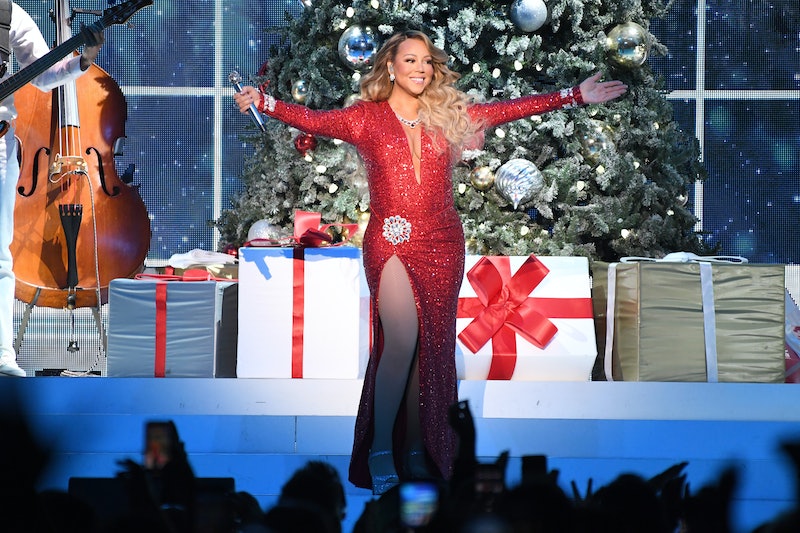 If you had told casual fans that the iconic holiday anthem "All I Want For Christmas Is You" wasn't one of Mariah Carey's 18 number one hits, they may not have believed you. Alas, it was a true fact — until today. Mariah Carey's "All I Want For Christmas Is You" finally hit number one on the Billboard Hot 100 chart, 25 years after the song was first released in 1994, as announced on Monday, Dec. 16. It literally took a quarter of a century for the tune that everyone jams to every Christmas to hit the top of the charts, but hey, better late than never.

"All I Want For Christmas Is You" is now Carey's nineteenth number one hit on the chart, according to Billboard, extending her reign as the solo artist with the most amount of chart-toppers (only the Beatles are ahead of her, with 20 to their name). She's now the fourth artist to land a number one hit in the '90s, '00s, and '10, joining Britney Spears, Christina Aguilera, and Usher. Her newest #1 is also only the second holiday song to reach the top of the chart, after "The Chipmunk Song" did it in 1958.

After the news was revealed, Carey went on Twitter to react to her historical achievement, retweeting Billboard's announcement and exclaiming, "We did it!" She fittingly added crying, Christmas tree, and butterfly emojis, because this is an emotional moment — and she is the queen of Christmas and butterflies.

Carey has actually been celebrating "All I Want For Christmas Is You" all season long. In November 2019, she explained how the song came to life in an interview with Cosmopolitan, where she revealed that it was the first song she wrote for her seminal holiday album Merry Christmas. "I just sat down, decorated a little tree and put on It’s A Wonderful Life and tried to get into that mood," she said. "I sat in this small room with a keyboard and started doing little melodies and stuff. I was going over all the things I think about at Christmas time that make me happy and how to turn it around and make it into a love song."

She also made it known in the interview that she is the official Queen of Christmas, both in the music world and at home. "I think everybody should spend Christmas with me because it’s a great experience," she remarked. See you under the tree on Christmas morning, Mariah!

More like this
Britney Spears Shares & Deletes Photos Of Justin Timberlake From 22 Years Ago
By Jake Viswanath
Brad Pitt Wants To Share The Spotlight With This Celeb In Shania Twain’s “That Don't Impress Me Much”
By Alyssa Lapid
Cruz Beckham Teased New Music With An Adorable Nod To Mom Victoria Beckham
By Stephanie Topacio Long
The Spice Girls Are Set To Reunite At King Charles III’s Coronation
By Sam Ramsden
Get Even More From Bustle — Sign Up For The Newsletter
From hair trends to relationship advice, our daily newsletter has everything you need to sound like a person who’s on TikTok, even if you aren’t.