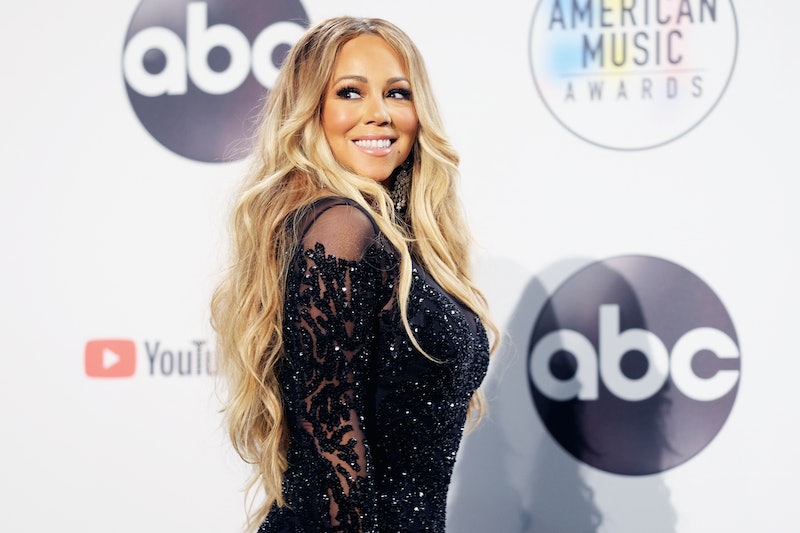 Lambs, we may have another Mimi on our hands. No, it's not another octave-climbing singer. Well, not yet, at least. There's no telling what kind of talent will emerge from this little lady later on down the line. On June 6, Mariah Carey shared a photo of her daughter, Monroe, and fans are freaking out about how much they look alike. Seriously, though — the resemblance is uncanny.

Now, it should come as no surprise that Carey and her daughter have similar features. After all, she birthed the girl herself. The thing that's so wild about the pic that Carey shared is the fact that Monroe is like, the spitting image of how her mom looked during the Daydream era.

Carey shared two side-by-side photos — Monroe is on the left, Mimi is on the right, in case you thought your eyes were deceiving you — on both Twitter and Instagram. "Always Be My Baby," she captioned the snaps, followed by the kissing-face emoji.

That caption, of course, is likely in reference to her smash hit song of the same title, which was released on her album, Daydream, way back in 1995. In the photo Carey shared of herself from that period, she was probably around 25 at the time. Monroe is only 8 — assuming the pic of her that Carey shared was taken pretty recently — and she's already starting to develop several of her mom's most notable features.

One of those features is, obviously, the hair. Throughout the '90s, Carey sported the same loosely-styled corkscrew curls that Monroe has inherited today. They both have the same brown, almond-shaped eyes, too, and pretty similarly shaped noses.

Countless fans on Twitter commented on the pics by saying things like, "twins," or, "she looks just like you," or, "like mother, like daughter." Clearly very sincere and genuinely complimentary. There were more than a few other fans, though, that were straight-up shook by the side-by-sides, and basically prophesied the second coming of Mimi.

"MARIAHS CHROMOSOMES SNAPPED!!!" one fan wrote of the photos. "I seriously cannot wait for miss monroe's debut album. Y'ALL ARE TWINS!!!" another Lamb exclaimed. "Miss Roe Roe, coming to SNATCH LAMBS’ WIGS with her debut album in a few years! I KNOW IT!!!" a third fan chimed in.

Yet another fan proposed that Monroe and Blue Ivy — Jay-Z and Beyoncé's eldest daughter — join forces. "Can Monroe save the music industry already???" they wrote in one tweet, followed by, "She can collab with Blue ivy, they’ll be unstoppable."

Hey, there's an idea. It's also a lot of pressure to put on two little girls, though, so we should probably just let them live their lives.

Monroe is pretty much a legend by proxy already, thanks to her mom's decade-spanning icon status. If she ends up following in Carey's footsteps too, that's great — but she's got plenty of time to decide what she wants to be when she grows up (other than her mom's twin, obviously).