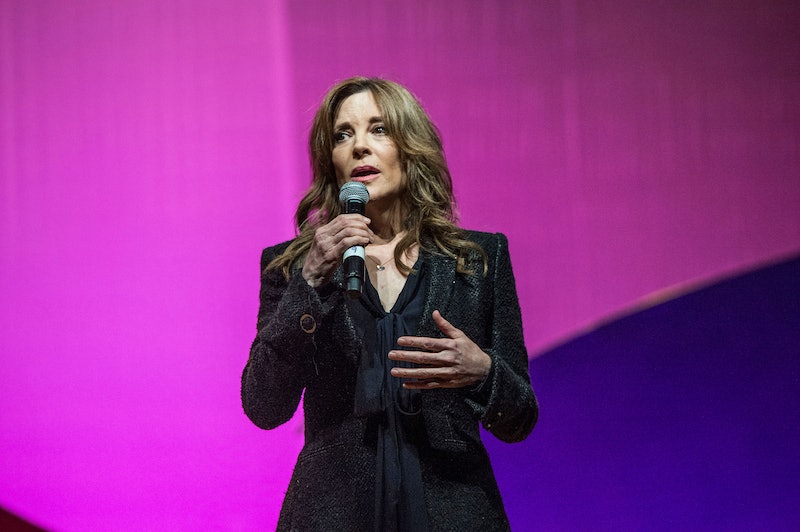 On a recent evening in Manhattan, Marianne Williamson, a 2020 candidate you may not be as familiar with as the other candidates, took one long stride onto a raised platform and settled herself into an armchair to enthusiastic applause. A crowd of approximately 80 people had packed themselves onto couches, crammed into booths, and spilled onto floor cushions to hear her speak at a local coworking space, where everything from the massive geometric lighting fixtures to the faux-greenery cascading down its walls screamed “New Age.” It was a fitting venue for Williamson, who makes a living writing and lecturing on consciousness and spirituality.

Williamson announced her run for the Democratic presidential nomination in January to little fanfare. Headlines on stories about her campaign launch described the author and motivational speaker as “Oprah’s spiritual adviser.” Her 1992 book, A Return to Love, landed her an appearance on Oprah’s show, cemented Williamson as Hollywood’s favorite spiritual guide, and brought thousands to hear her lectures. Raised in Texas but long based in Los Angeles, Williamson is known for her charity work, particularly in helping people with HIV/AIDS. What she’s not known for is political prowess: She’s never held public office, although she did run for Congress in California in 2014, finishing fourth out of 16 candidates.

"I feel that the fact that I have a 35-year career navigating the kind of changes underneath the surface that have to happen in order for fundamental change and transformation to occur is the skill set I have,” she told the crowd. “Experienced politicians took us into Iraq. A bunch of philosophers didn’t do that.”

Plus, she sees an advantage in her inexperience.

“I have nothing to lose,” she tells Bustle. “I’m doing this to tell the truth as I see it.”

The truth as Marianne Williamson sees it is that all of the political quagmires that the United States is thrashing about in right now are rooted in what she calls our collective “moral rot.” According to Williamson, that decay runs from America’s slave-holding past — she was the first 2020 candidate to work reparations for slavery into her platform — straight through to the glut of dark money in politics and the ethics-free pursuit of short-term profits that corporations participate in today.

And so she distills her vision for America into one word: love. That makes it easy for Williamson to draw a contrast with President Donald Trump. To her, he is fear. She is love. And she wants to facilitate a country-wide “awakening” to what she calls the transformative power of love, as opposed to approaching political battles from a place of anger.

“I see it like the difference between white sugar and nourishing food,” she tells Bustle. “A certain level of anger is like white sugar. It gives you an adrenaline rush, but then you crash, because it ultimately brings pain. And I believe that when love is your motivator, your inspiration, it’s more nourishing. It gives you energy over the long haul.”

In her speech at the coworking space, Williamson exhorted the audience to move beyond the impulse to better themselves, and to instead start “manifesting” love for people all over the country and the world. But Williamson also made clear that she believes the country’s moral rot is way too far gone for individual acts of kindness to make any difference. Those who feel a higher calling to “heal the soul of America,” like Williamson, must turn to politics now.

During a question-and-answer session at the Manhattan event, a member of the audience asked what Williamson would say to people who think running on love is naive. “They obviously haven’t seen the issues section of my website,” she deadpanned.

Williamson’s campaign site does have one of the most robust issues sections of any of the Democratic candidates, if you’re measuring robustness by the sheer number of topics addressed. (Only five Democratic candidates break out issues pages on their websites at all, and the only candidate who lists more issues than Williamson on his site is Andrew Yang, an entrepreneur whose core campaign promise is a universal basic income). Seemingly every progressive issue under the sun is represented on her site, from gun safety and health care to LGBTQ and women’s rights. There are issue pages for food, Native American justice, and “democracy at risk.” The pages are largely statements of goals and priorities, rather than specific policy proposals like the ones Elizabeth Warren has put out on universal child care, Kamala Harris has put out on teacher pay, and Amy Klobuchar has put out on infrastructure.

Where Williamson has been out ahead of the 2020 Democratic field was in calling for reparations to be paid to black Americans, at first pledging $100 billion to the effort over a period of 10 years. After experts criticized that amount as far too little, she revised it upward to $200 billion to $500 billion, to be paid out over 20 years and distributed by a council of black leaders.

The candidate was also asked in the question-and-answer session what the one thing she would do to make change as president would be. She rejected the premise of the question, noting that many of the policies former President Barack Obama put in place were rolled back by Trump.

So how does she pitch herself to people in early voting states as the best choice in a crowded field of candidates for president, given that she’d take the same actions in office as Warren or Sanders would?

“I don’t even think that way,” she tells Bustle. “I’m not trying to sell myself. I’m trying to offer the American people the option of another way. I see my job as articulating as fiercely and authentically as I can my vision of America and what I feel we need to do to change it. It’s up to the American people whether or not to choose that.”

Williamson jokes about running in a Democratic field with “1,736 other people,” who, by the way, she’s quick to point out are all smart and good. The 2020 conversation now involves everyone from the former CEO of Starbucks, who early on was granted a CNN town hall even though he hadn’t declared a run, to a long-retired senator from Alaska who was drafted into the race by a group of teens. But speaking to the crowd at the coworking space, Williamson said she felt that the invisible hands of the media and the political establishment were keeping her at a distance from the rest of the pack. At one point, she referred to it as a “a kind of modern, subtle witch burning” — language that could have fallen just as easily from Trump's mouth.

To qualify for the first Democratic debates in June, candidates must either poll at 1% in three separate polls or get 65,000 donors to contribute to her campaign, with those donations coming from a minimum of 200 donors each in 20 states. Williamson has not hit 1% in three separate polls to date, so she’ll need to hit that threshold of 65,000 donors to qualify for a debate. Her campaign said on April 11 that she'd surpassed 45,000 donors.

Now, it is changing: Williamson is getting her very own CNN town hall. At 6 p.m. ET on Sunday, she’ll have an entire hour to make the case for a politics of love to a national audience. It just might go down as the moment America began its awakening. But if it doesn’t?

“There always seems to be someone, it could be someone at a lecture or someone who appeared on the street or in a store or a restaurant, that says something that feels like an angelic message: ‘Keep going,’” she says. “And it confirms for me what I feel to be true in my deepest heart, that I’m not the only one who feels this way. That there are millions of us. If I can do anything to articulate how millions of us feel, then it was worthwhile for me to do this.”