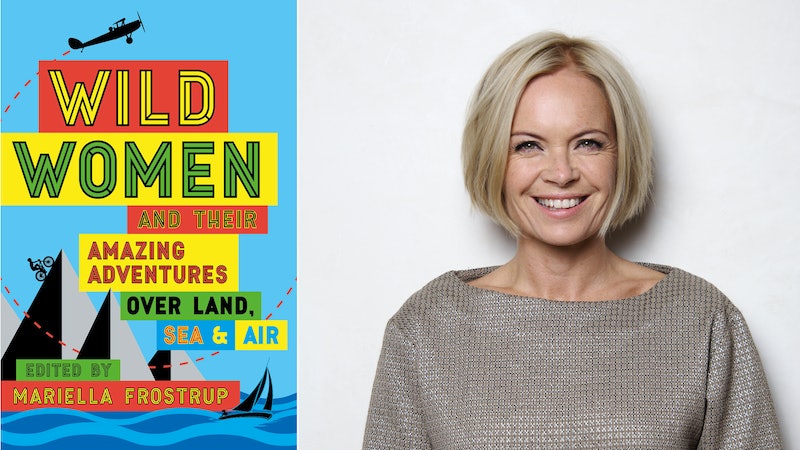 Broadcaster, writer, agony aunt, and activist — there are many strings to Mariella Frostrup’s bow. Whether she is taking a look at the book shelves of famous friends like Dominic West and Cate Blanchett, or lifting the lid on gendered double standards on national TV, she does it all. She is now releasing a book to tell the stories of some amazing women. Bustle sat down with Mariella Frostrup to chat Wild Women, motherhood, and why she would like to take a peek at Stormzy’s bookshelf.

It feels like there is very little that Mariella Frostrup can’t do. You've probably read her well respected cultural commentary and her top class advice in her Observer agony aunt column, or seen her debriefing with couples post-intercourse on Channel 4’s Sex Box. Her latest work has seen her host her own BBC podcast, Books to Live By… with Mariella Frostrup. Each episode she will take you into the home, dressing room, or hotel of some of the most famous faces around the world to examine the stories that have shaped their lives. She has also just curated the book, Wild Women, which will explore more than 50 of the greatest escapades ever experienced and told by women. If you are looking for a little bit of adventure or inspiration you need look no further. These stories are phenomenal.

Alice Broster: What gave you the idea for Wild Women?

Mariella Frostrup: It was just a combination of things, I suppose. The thing that kicked me off was seeing a picture of some rather extraordinary looking, very stern Victorian woman sitting on a mule in a local newspaper. Standing at the front of the mule was her trusty cohort Pablo, with who she'd been travelling with for 20 years around the wilds of Mexico, recording these ancient Mayan sites. I just thought, who is this extraordinary woman and why have I never heard of her? Then I started thinking about all the other women that might have done similarly extraordinary things.

I started thinking about all those great, famous men who were famous even when they failed. Shackleton getting stuck in the ice. Poor old Scot in the Antarctic. Columbus, didn't even know where he was. Yet, we know all of their names. I thought, well I wondered if there's women who've done similar journeys. That was the beginning of it, really.

AB: I'm sure it would be hard to pick but do you have a favourite story?

MF: There were just so many. There's one by Lois Pryce where she's travelling from the top to the toe of Africa on her motorbike and she winds up being forced to go on a train from the capital of Congo for a day because of some bureaucratic misdemeanour. She's on this train overnight full of a whole platoon of drunk Congolese soldiers.

She's a woman on her own with only her motorbike sitting beside her for company. It was just like all of those terrible nightmares you have as a woman about travelling rolled into one. Yet she described it all in a really engaging but relaxed way.

There's also an incredible woman called Juanita Harrison. She was African-American. She grew up a little girl in Mississippi and left school — well, she didn't really go to school but for a few months. She left Mississippi at the age of ten to go into domestic servitude and saved up all her money so she could travel the world and wrote a book, even though she was virtually illiterate, called My Great, Wide, Beautiful World. Just to have managed to do that at the turn of the 20th century is just such an extraordinary feat.

AB: You've used your platform and your position to speak up for women's rights both at home and abroad. Do you feel optimistic for the future for women?

While we're all patting ourselves on the back in the Western world, and there's #MeToo and all of those things, I think we could do well to just remember that in Afghanistan girls are still being married off at the age of 12 and 13 despite supposed laws to protect them. There are many parts of the world where women are still not treated as much more than brides and beasts of burden. Yes, I'm optimistic, but I think that we've got a lot of things to look out for as a species. One of them is equality. The other is just look at the damage we're doing and try and address that in terms of the planet because it'd be all very well to be equal in a world that's scorching and uninhabitable. Be just our luck.

AB: As you mentioned, you have a teenage daughter. Are there any books that you've recommended to her that you'd quite like her to read?

MF: Loads. She's reading a really inappropriate at the moment called Daisy Jones and The Six which is loosely based on the formative years of Fleetwood Mac. There is also a brilliant book by an Irish writer called Orlagh Collins called No Filter, that was a little bit about Internet bullying and a lot about falling in love.

I just try and encourage her to read books where they've got feisty female heroines because I don't think she needs to be reading great pieces of feminist polemic at this point. I think she just needs to know that it's perfectly normal for a girl to climb a mountain or cross the world or make scientific breakthroughs. I think that's the important thing. Actually, she's quite lucky because she's growing up in an era where all of those stories are recorded in books whereas when I was growing up, most books, unless they were about Eloise at the Plaza, had male heroes.

AB: Are there any books that she's recommended to you that you've loved?

MF: Not really, no. She's 14. I have a look at what she's reading, but most of it is stuff I've already read and she's now reading, it goes a bit the other way around. Though, in fairness, she read No Filter first, and then, told me it was brilliant, and then, I read it.

AB: Amazing. What have you learned from having a daughter?

MF: I suppose at the moment just how difficult it is negotiating your teens. But also not specifically having a daughter, but just from having children, how much it is about making sure how these little people come into the world and they know exactly who they are and how they want to be. You've got very little chance of changing that. You can only stand in the sidelines and try and make slight adjustments along the way.

AB: How important have books been for you?

AB: What books have had the biggest impact on you?

MF: I think that's the hardest question because by the time I read something new, I'm taken with that. Also, I think you'd like different books at different stages of your life. When I was younger, I really loved all the magic realism and I used to love reading Isabel Allende and Gabriel García Márquez and escape into this strange, satirical world. Then, there's a writer called Tim Winton, who's Australian, who really has an awful lot to say about kindness and empathy and love. I think there's just so many. I love writers like Carol Shields and Alice Munro, who sum up what it is to be human for me. There's just so many.

AB: You've previously written about lusting after Aidan Poldark on TV. Who is your ultimate literary crush, if you had to pick one person?

MF: No. Do you mean like a fancy or do you mean whose books I loved? Because it's two different things, really. I think I would have really fancied Ernest Hemingway, but I think it would have been just a sexual thing. I don't think I would have liked him very much. It really depends. It was easy with Poldark because that was just pure lust.

AB: I get that. Do you think you can learn a lot about someone by looking at their bookshelf?

MF: Yes. I've just started doing this podcast called Books to Live By. The strangest thing about it is then discovering, when you ask people to choose six books, how much they are surprised by the fact that there's usually a theme that runs through all of them, or nearly all of them. It was that way with Dominic West. His books were all about decay and dying and sex.

Cate Blanchett's were all about women struggling to make a space for themselves in a world that expected other things from them. Brian Cox was all about the stars and science and things emerging.

AB: If you could pick a dream guest for Books To Live By, dead or alive, who would it be?

MF: God, let me think. Alive, I would love to talk to Stormzy or Dave, one of those rappers because I just think that the lyrics that they write are so brilliant. I'd love to know what they read that's inspired them to write the way they do, because I think they are a bit like new Dickens. They write about lives that most of us won't have to live and they do it really poetically. I think it'd be really interesting to know what books they read.

I think I'd I like to know what books Margaret Thatcher read.

MF: Yes, because I’d like to know what made her so callous and uncaring about other human beings, because maybe she didn’t read at all. I think that it’s very difficult to be a big reader and not to develop empathy with your fellow men.

AB: Finally, what are your top three holiday books you sit and devour?

MF: It depends where you're going. I always think it’s really good to read something that has at least the sort of atmosphere of where you’re headed, even if it’s not exactly the same thing. I remember once trying to read Miss Smilla's Feeling For Snow in the Caribbean and that just didn’t work very well at all. I think you can’t go wrong with anything by Graham Greene because he's such a good writer and even though they're classics, they're also incredibly readable.

I love the book called Home Fire by Kamila Shamsie, that I think is a really important book to read right now. It’s fascinating about Britain today, but it’s also a real page turning novel.