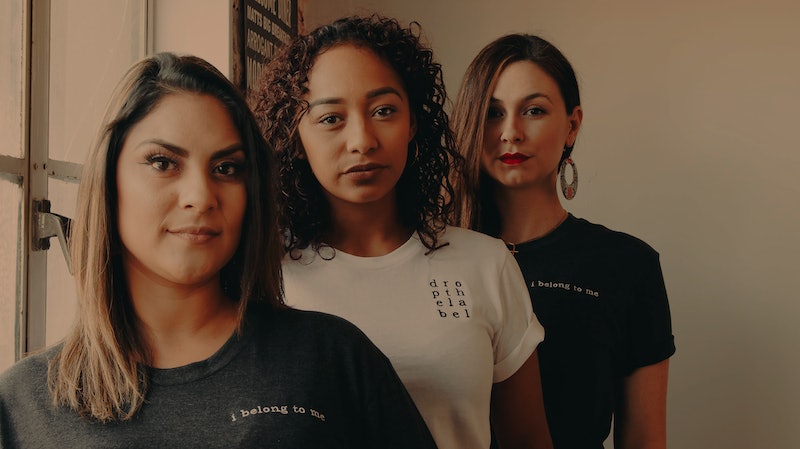 It's been just over a year since #MeToo sprung from a viral hashtag into a veritable movement, turning more than a decade of quiet, steadfast work into a culture-wide awakening. In the intervening months, powerful men have been made to answer for what they do with that power. We've begun asking questions about which stories are being told, and who is telling them. And the response to sexual misconduct has grown from a knowing whisper into a loud and damning roar.

It might be easy to assume, then, that #MeToo has changed how we view movies and television. Hollywood was, after all, the genesis of this sudden about-face; surely those who most engage with it have been affected, right? To some extent, that's true: #MeToo has altered the way we consume film and TV, but not as extensively as it may seem.

When Bustle surveyed its Hive platform in October, 19 percent of the 332 respondents said #MeToo "greatly" affected what they watch and 50 percent said it had "somewhat" affected what they watch, while 29 percent said it hadn't affected what they watch. Collectively, that means 79 percent of those polled said it had influenced their viewing habits. Results of a May 2018 survey from market research company Morning Consult affirm those findings: Nearly half (47 percent) of 2,202 respondents said that they're less likely to tune into movies or TV shows starring someone facing accusations of sexual misconduct post-#MeToo. Taken at face value, that's promising — especially for a movement that, though long in the making, gained such large public momentum only one year before.

However, further results from the Morning Consult study illustrate the importance of looking more closely and carefully at our perceived progress. When respondents were presented with the specific names of 20 men accused of sexual misconduct, their answers told a different story. Only two of those men — Kevin Spacey and Louis C.K. — caused a majority to say their viewership habits would change if one of those actors were attached to a project. This is partially due to awareness: Of the men listed, which included James Franco, Casey Affleck, and Aziz Ansari, Spacey was the only one of whom most of those surveyed said they had heard a lot or some about the allegations against him.

Of course, the range of reported abuse involving these entertainers is quite wide, and many of the allegations, Morning Consult notes, "are just that: allegations." But this also suggests that while many people's attitudes have shifted in theory, they've shifted less so in practice. Take, for example, Spacey and C.K. — the two men who, for consumers, seem to elicit the most dissonance. Yet when C.K. mounted a comeback less than a year after admitting to multiple incidents of sexual misconduct, the New York Times reported people not only bought tickets to his show, they "greeted him warmly." And that can't be chalked up to a lack of awareness: According to the Times' account, he referenced the misconduct directly in his routine.

Meanwhile, when Netflix fired Spacey from House of Cards in November 2017 following several allegations of sexual assault, fans were divided about whether it was justified. (Spacey apologized on Twitter for allegedly making sexual advances toward a minor and claimed he didn't remember the incident; he denied allegations made against him by an anonymous man published on Vulture, and has not returned Bustle's requests for comment on further accusations.) And though his most recent movie, August's Billionaire Boys Club, took in a paltry $126 on its opening day, that can at least partly be attributed to the fact that it opened quietly in just 10 cities after an equally as quiet video-on-demand release the month prior — likely a move by the studio to mitigate potential backlash. Had it opened more widely, the turnout may have been less stark.

So, what exactly does this tell us? It tells us that the ways in which #MeToo has affected viewership are not simple. It tells us that change, particularly in an industry as broad and inconstant as entertainment, is difficult to quantify. And it tells us that for as much ground as we've covered, there are still miles left to go.

But that shouldn't diminish a year of epochal, unquestionable achievement because, even if progress is not yet tangible among audiences, it's certainly materializing behind the scenes. Intimacy coordinators have been hired. Inclusion riders have been instated. Women are demanding more, demanding better.

The effects of such mechanisms, as with all that came before #MeToo, have not been immediate. When Vanity Fair reached out to five major studios in June to inquire if they'd greenlit any projects with any form of inclusion rider attached, the responses were ambiguous. The concept of an intimacy coordinator — someone hired to ensure sex scenes are both physically and psychologically safe — has only begun to gain popularity within the last six months, most notably when Emily Meade enlisted one for The Deuce. And it's not as if sexual misconduct has suddenly stopped existing.

But there are concrete, tangible strides worth celebrating. Time's Up has raised more than $20 million to combat workplace abuse; 16 states have proposed legislation limiting non-disclosure agreements in sexual harassment cases; Los Angeles police have mounted a task force to investigate sex crimes in Hollywood; the Screen Actors Guild is working to ban auditions in hotel rooms and residences; and Women in Film's Los Angeles chapter launched a new harassment helpline in December 2017 that, according to spokeswoman Catherine Olim, has helped more than 350 survivors in need of resources and support, and referred roughly 123 women to pro-bono attorneys.

As is evident from Morning Consult's research, it will take time for this work to translate into lasting, substantive gains. For as many headlines as there have been championing #MeToo's watershed awakening, the sea change has not been as swift as those same headlines sometimes suggest. If there's one thing, though, that's become evident in the last 15 months, it's that we've cracked open a gate we've been clawing at for centuries, and it is only if we keep pushing that it will blow open entirely.