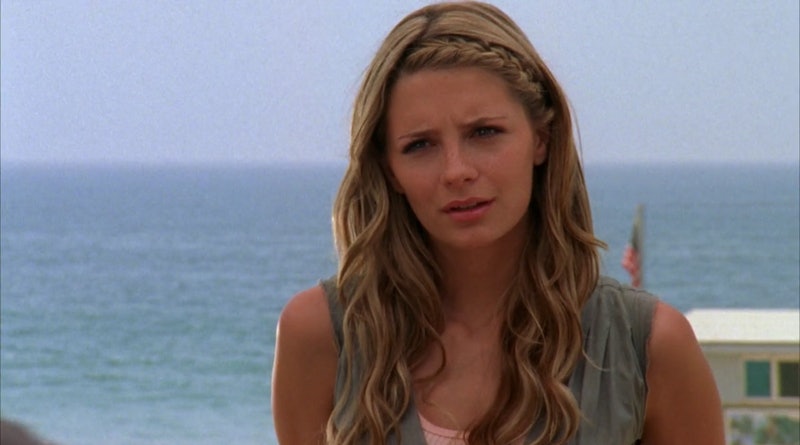 I have rewatched the first three seasons of The O.C. at least seven times, but I've only watched Season 4 once. While there were a number of factors that made The O.C. so great — the dynamic of the whole cast, the indie rock soundtrack, Chrismukkah — I've only seen Season 4 once because Orange County just wasn't the same without Marissa Cooper, as played by Mischa Barton. While some viewers found were less-than-fond of her, I'd like to make a case in defense of Marissa Cooper.

Marissa tragically died at the end of the third season (fans everywhere will never be able to listen to "Hallelujah" the same way), but until then she was the show's one-person drama turbine. In a series rife with scandals and turmoil, there is no doubt that Marissa was at the center of a large number of them. Sometimes she created chaos around her, like when she overdosed in Tijuana, and other times she was just a victim of circumstance.

Sure, she rebelled and made some questionable decisions — like that time she stole a watch and some earrings from South Coast Plaza — but she was also a fiercely loyal friend and girlfriend, a devoted daughter, and she singlehandedly got the monosyllabic Ryan Atwood (Ben McKenzie) to open up.

Whether trying to see the best in Oliver or helping Johnny talk through his difficult past, Marissa always tried to see the best in people, even if it occasionally got her in trouble. Her sparring with her mom, Julie, played by Melinda Clarke, made for one of the most entertaining dynamics on the show, and Barton's on-screen chemistry with McKenzie was magnetic, and here are six reasons why the haters should #LeaveMarissaAlone.

She Was A Pretty Great Girlfriend

Sure, Ryan had to rescue Marissa plenty of times throughout the first few seasons of The O.C., but she rescued him right back. Whether helping him evade the cops by fleeing on her dad's boat or, in an extreme case, shooting his brother Trey to stop him from killing Ryan, Marissa always had Ryan's back.

She Was A Pretty Good Friend, Too

Like any best friends, Marissa and Summer, played by Rachel Bilson, had their ups and downs, but they were there for each other when it mattered most.

She Loved Her Family

Marissa cared deeply about her family. While her sister Kaitlyn, played by Willa Holland, was away at boarding school for the majority of the series and the two largely lost touch, Marissa tried to make it right when Kaitlin called with an emergency in Season 3. She even went so far as to drive to Montecito and impersonate a British exchange student to help Kaitlin get out of trouble.

Also, no matter how many times her dad Jimmy, played by Tate Donovan, majorly messed up, she always forgave him. Marissa even reconciled with Julie in the end after their years of sparring. She may spent a lot of time complaining about her parents, but at the end of the day, it was clear that all she really wanted was for them to be the loving family she knew they could be.

She Kept It Real

No matter what manipulative scheme her mom, Julie was dreaming up — usually in the form of a fundraiser at the Newport Bay Yacht Club — or how mad Summer got at Seth, Marissa was a, somewhat surprisingly, level-headed voice of reason (at least, when it came to other people's problems).

She was also the only person who could could get Ryan to cool down when he was intent on punching someone, which came in handy more often than not.

She Was Only Human

Marissa went through a lot in the three seasons she was on The O.C., more than most characters go through in an entire series. And much of the time the craziness surrounding her was so out of control, it was a miracle she even survived it. She dealt with it as best she could, and watching her stumble was always a good reminder that she wasn't perfect.

She Had a Good Heart

Through it all, Marissa always meant well and she deserves better than to be remembered as the drama queen of The O.C..

In the end, her story was a tragic one that ended too soon. #RIPMarissaCooper

More like this
How The Thanksgiving Episode Of 'Gossip Girl' Changed Pop Culture History
By Gabrielle Bondi
The First Trailer For 'That '90s Show' Includes So Many Nods To The Original Series
By Jack Irvin, Alyssa Lapid and Grace Wehniainen
The 'Ugly Betty' Cast Just Reunited In The Best Way
By Sam Ramsden
'Bel-Air' Season 2 Finally Has A Release Date & A New Trailer
By Brad Witter, Kadin Burnett and Sam Ramsden
Get Even More From Bustle — Sign Up For The Newsletter