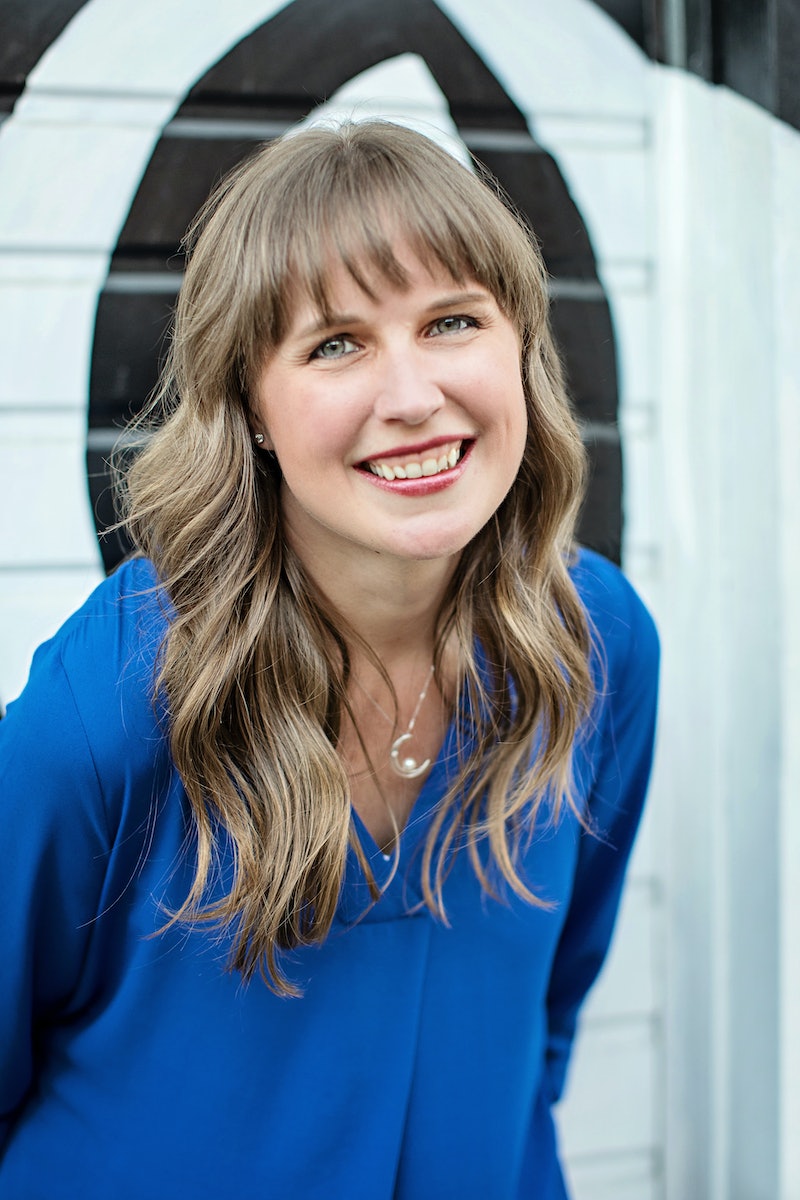 Later this year, Marissa Meyer's Renegades trilogy will come to an end with the release of the final installment, Supernova, on Nov. 5. But if you're a diehard fan of the author, you have no reason to worry about what comes next: Bustle is excited to announce that Marissa Meyer has four new books — two contemporary romances and two retellings — being published by Feiwel & Friends between now and 2023.

If you're not familiar with the work of Marissa Meyer, here's what you need to know: After years of writing fanfiction, she launched her writing career in 2012 with the release of Cinder, a sci-fi/fantasy retelling of the story of Cinderella. That book was a New York Times bestseller and became the first installment in The Lunar Chronicles series, which now consists of four books, one prequel, and a number of novellas. After that series came to a close, she released a standalone Queen of Hearts retelling, Heartless, as well as the sci-fi/fantasy Renegades trilogy. Let's just say that she definitely knows what she's doing when it comes to fairytale retellings and SFF novels. Now, you get to find out if she can bring that same magic to the real world.

Scheduled to be released in November 2020, Instant Karma is Meyer's first contemporary romance. Here's what to expect, according to the publisher:

In this contemporary romance with a bit of magic, chronic overachiever Prudence Daniels is always quick to cast judgment on the lazy, rude, and arrogant residents of her coastal town. Her dreams of karmic justice are fulfilled when, during a night out with her friends, she slips on a spilled drink and hits her head, only to wake up with the sudden ability to cast instant karma on those around her. Pru giddily makes use of the power, punishing everyone from public vandals to karaoke hecklers, but there is one person on whom her powers consistently backfire — Quint Erickson, her slacker of a lab partner and all-around mortal enemy. Over the course of a summer, Pru begins to uncover truths about Quint, her peers, and even herself that reveal how thin the line is between virtue and vanity, generosity and greed... love and hate.

How good does that sound? Instant Karma may not be out for another year, but Meyer's newest book, Supernova, is available for pre-order. Plus, Bustle has an exclusive Q&A with Marissa Meyer about the three new books on the horizon:

Bustle: What can you tell us about the couple at the center of your new book, Instant Karma?

Marissa Meyer: Prudence and Quint are two very different people. Pru is a chronic overachiever, super ambitious, and full of determination. She has high expectations, both for herself and those around her, and though she'd never admit it, she can be pretty harsh on people who fall short of those ideals. One of those people is Quint, who is laid-back, charming, and a bit of a class clown. In Pru's eyes, he's a total slacker and she can't make sense of why everyone seems to adore him. That said, they both have good intentions and a yearning to see good things happen in the world, even if they don't always see eye-to-eye on what that means.

Before this, you had only written sci-fi and fantasy. Why did you want to branch out into contemporary romance? How did the process differ from the process of writing fantasy?

As a reader, I've been in love with the contemporary romance genre almost as long as I've loved fantasy, and often the things that I'm reading will inspire new story ideas in me (as with every writer, I'm sure!).

Interestingly, the idea for Instant Karma actually started with a character who was in an early draft of Renegades — a superhero who had the ability to exact instant karma on those around him! That character was eventually cut from the book, but I loved that superpower and immediately started looking for another way I could make use of it. That soon started to take the form of a contemporary romance. As far as how the process differs from writing fantasy, I'm still in the early stages of drafting Instant Karma, so I can't say for sure, but so far the biggest difference seems to be that writing contemporary requires far less world-building! There is still some world-building to be done, of course (I'm creating a fictional beachside town for the setting), but a lot of my focus for SFF, such as deciding on political and economic factors, aren't an issue. I know there will be new challenges going forward — every book has them! — but so far, writing Instant Karma has been a lot of fun, and feels a bit like returning to my roots in romance-driven fanfiction!

You've written so many fabulous retellings, and there's so many stories out there to use as inspiration. What stories are at the top of your list for the two fairy tale retellings?

I have so many ideas! Right now, I'd say the top contenders for my next retelling are Bluebeard (I'd love to do a horror/thriller take on it), Rumpelstiltskin (this one has always left me with some unanswered questions), and one I've gotten tons of reader requests for Beauty and the Beast! I'm excited to see where the muse takes me.