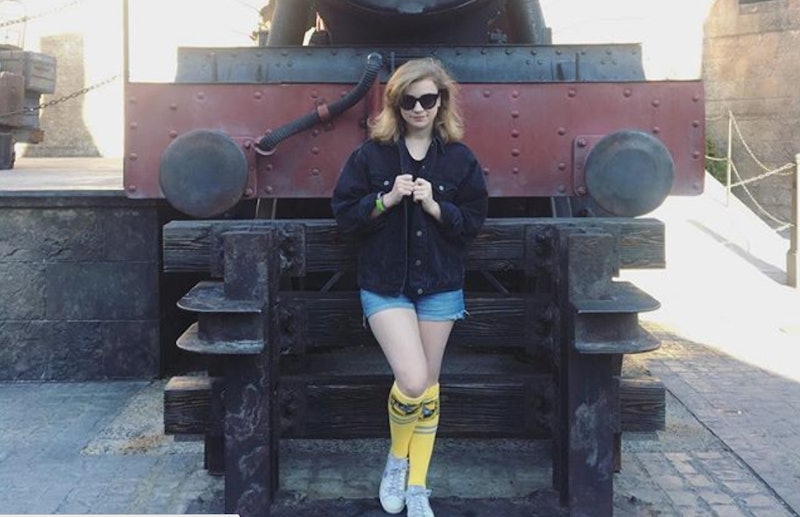 "If you ever wanted to be a published author, you need to stop writing fan fiction immediately."

I blinked, wondering how I'd gotten from standing in line for a snorkel at the beach to having my entire geeky world upended in one sentence. Several minutes earlier I'd struck up a conversation with the woman in front of me, who turned out to be a published author. It was January of 2016, so I was about 15,000 words deep into what would eventually become a monstrous, novel-length fan fiction sequel to The Force Awakens, and was so hopped up on having someone to talk writing with that I told her as much.

Undoubtedly this woman meant well — and there is, of course, some truth to her words. Unless you're the rare exception, à la 50 Shades or After, odds were my Star Wars and Spider-Man fics were never going to earn me anything more than brief Tumblr renown. But in the years that have passed since that encounter, I've thought about that conversation so many times and gained enough perspective as a writer that I wish I had said something to make her understand what could have happened if a budding author took that advice to heart.

"But in the years that have passed since that encounter, I've thought about that conversation so many times and gained enough perspective as a writer that I wish I had said something to make her understand what could have happened if a budding author took that advice to heart."

The primary one is this: When I was growing up, fan fiction made me fearless. I mean stupidly, naively, painfully fearless. I was already churning out tens of thousands of words per month as a preteen before it even occurred to me that I might be bad at it.

And, holy guacamole, was I bad at it. My first story was a self-insert Harry Potter fic. But I'd argue if you get better at writing by doing, then you get better much faster by writing fan fiction. You often don't need to world build because the framework is right there. So you learn to play with old tropes, and eventually subvert them; mess with familiar character dynamics, and eventually give them surprising, satisfying twists; take side characters from works with barely any dialogue and imagine rich histories for them; and then you watch in real time as readers react to things, and over the years learn not just the kind of writing that you're good at and enjoy, but the kind that people respond to the most viscerally. You find the sweet spot of what you love to write and people want to read. You start to think of writing as what, in the end, it truly is: a service to the reader. An act of love, or of understanding. Nowhere is the core of that more raw than in the fan fiction community, where none of us have anything to gain except a feeling.

The success of fan fiction authors who have made it to the mainstream is just concrete proof that that love, when tended to, can yield professional results — often, prolific ones. To name just a few, Meg Cabot, author of the famous Princess Diaries, wrote Star Wars fic; Cassandra Clare, author of the Mortal Instruments, was notorious in the Harry Potter fandom; Naomi Novik, author of Her Majesty's Dragon and a founder of the Organization for Transformative Works, wrote fic for Master and Commander that inspired her debut.

A few years ago I discovered, to my extreme delight, that one of my favorite fan fiction authors, whose prolific Sailor Moon fics I religiously read as a teen, was in fact Marissa Meyer, #1 New York Times-bestselling author of The Lunar Chronicles and her newest series, Renegades. She kindly spoke to Bustle about her experiences with growing up in the fan fiction community, and how it ultimately influenced her success as a writer beyond it — experiences relatable to any fan fiction enthusiast, published or not.

"I had always wanted to be a writer, so I think that I would have attempted to become a published novelist at some point regardless of whether or not I had discovered fan fiction," writes Meyer to Bustle over email. "However, I’m positive that my experience with fanfic greatly accelerated the process! Not only because I was practicing the craft of writing almost every single day from the time that I was about 14 years old, but also because the fandom was so encouraging and supportive. I wasn’t only receiving feedback and criticism, I was also hearing a lot of complimentary things about my stories, and had complete strangers telling me how much they looked forward to reading my work week after week. That was so huge to me when it came to having the confidence to submit Cinder, my first novel, for publication."

"Not only because I was practicing the craft of writing almost every single day from the time that I was about 14 years old, but also because the fandom was so encouraging and supportive."

What Meyer explains as her motivation to write as prolifically as she did is the crux of what makes fan fiction so unique, whether as a hobby, as an art form, or as a stepping stone to something else. The writing is both selfish and selfless — you have nothing material to gain, only the feeling it gives you and the hope that it gives that same feeling to someone else. And, ultimately, it's the acknowledgement of that feeling, and the responsibility that comes with it, that prepares you for writing beyond fic.

"Even though I wasn’t getting paid for my stories, I felt an incredibly strong responsibility to my readers, and so I made the conscious decision early on that I would never leave a story incomplete (a problem that plagues the world of fan fiction!), and that I would post consistently," writes Meyer. "For years I would strive to post something every single week, whether a short story or a chapter of a longer work. That taught me so much about writing to a deadline and prioritizing my writing and getting words down even when I wasn’t necessarily 'inspired' to do it."

The writing is both selfish and selfless — you have nothing material to gain, only the feeling it gives you and the hope that it gives that same feeling to someone else.

That work ethic that comes from writing fic is no joke, as the past few years have shown me. After I finished all 80,000 words of the Star Wars fic that published author told me to quit (whoops), I finished my second manuscript — one that I was encouraged to write by fan fiction readers. It eventually got me signed with an agent. In the past year I've written over half a million words, about 320,000 of which were original fiction; the rest were strewn across three separate anonymous accounts, writing for different fandoms. That seems like an excessive amount, but many people who write fan fiction and their own fiction depend on that balance. I write my own fiction because being published is my dream, but getting there is frustrating, and scary, and hard. I have to write fan fiction to remember why I have that dream in the first place.

The key, I have found, was never to stop writing fan fiction in service of my own writing — it was to make room for both.

"I write my own fiction because being published is my dream, but getting there is frustrating, and scary, and hard. I have to write fan fiction to remember why I have that dream in the first place."

Meyer echoes that sentiment and takes it a step further, in expressing that we don't even have to justify our love for writing it with productivity success — the joy it brings writers alone is reason enough.

"Some people paint, some garden, some go camping, or join sports teams, or take random online classes on obscure topics. Just because something isn’t contributing to your life financially doesn’t mean it’s worthless," Meyer writes to Bustle. "There are so many elements of fan fiction, and fandom in general, that can be beneficial to a person or an aspiring writer. Whether it’s homing their skills, receiving feedback and encouragement, meeting their 'people,' or even simply reading and writing for the pure love of the source material — those are all wonderful things, and are absolutely worthwhile."

Personally, I used to think of fan fiction as something I'd grow out of — but if anything, I only get more passionate about it as time goes on. It's not just an escape for me now. It's the place where I experiment. It's my community. It's the safe haven I come back to when my writing tanks in the real world, and I need a soft place to land. I sit at my laptop and I'm not just 26-year-old me writing my own stories; I'm 11-year-old me at Hogwarts, 15-year-old me in revolutionary France, 22-year-old me exploring different galaxies. I'm the strangers on the internet who took the time to read my work and encourage me; I'm infinite possibilities made up for finite stories; I'm millions of words that will never see a printed page, but quietly, steadily built me into the writer — and the human — that I am today. That author who told me to stop gave the best advice she thought she could give me, as someone who didn't write fic herself. But like so many authors before me, if I get published one day, it won't be in spite of all the fan fiction I wrote — it will be because of it.