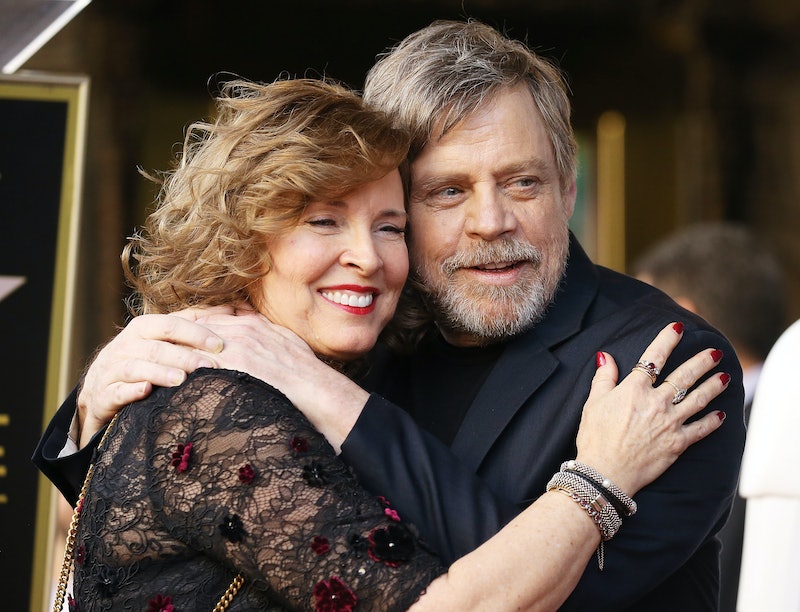 This love is intergalactic and still going strong. On Monday, Dec. 17, Mark Hamill celebrated 40 years of marriage with his wife Marilou, honoring the occasion with a sweet Instagram post and tweet. On his social media pages, the Star Wars actor posted a series of photos with Marilou, each one from a different period in their lives. Most of the photos show the couple posing at various events, though one is a throwback with their three kids Griffin, Nathan, and Chelsea.

Hamill captioned the photos with a special message for his wife. He began with a quote from Maya Angelou, writing:

Hamill continued, even throwing in a touching hashtag, "40 years and counting....#NoMeWithoutYou." A lot may have changed for the couple over the decades, from Star Wars becoming an international sensation to starting a family, but these two are clearly still keeping each other grounded, even all these years later.

As a recap, Marilou and Hamill began dating in the 1970s and got married in 1978, according to People. The couple reportedly took a small break early in the relationship, but ultimately returned to each other and have been solid ever since.

The story of how the pair met is unique, and surprisingly has little to do with the entertainment industry. In a 1981 interview with People, Hamill revealed the two met during a routine dentist's visit. Marilou was working as a dental hygienist, and they began seeing each other shortly after.

Hamill said he knew Marilou was the one because she made a joke during an early screening of Star Wars. "There was this one close-up of a minor character, curling his lips back from his teeth," he told the publication. "She leaned over to me and whispered, ‘Bad caps.'"

The Hamills got married on Dec. 17, 1978, and had their first son Nathan in June 1979. Their second son Griffin was born in 1983, and daughter Chelsea in 1988. Hamill and Marilou remain close with their kids now that they are adults. In April, Hamill and Marilou sat down for an interview with their daughter for Good Morning America. The appearance was an opportunity for Hamill and Marilou to discuss the legacy of Star Wars and how they managed to maintain a healthy relationship.

"We've kind of been out of Hollywood. We don't live in town," Marilou said. "We don't go in and do all the party circuits. It's kind of been nice that the films did take a break because it gave us time to raise a family."

Four decades of marriage is a big milestone for any couple, never mind one that is subject to the pressure of working in Hollywood. It's clear these two have figured out the secret to making things work long-term, and Hamill's sweet tribute shows that they're both still very much in love.