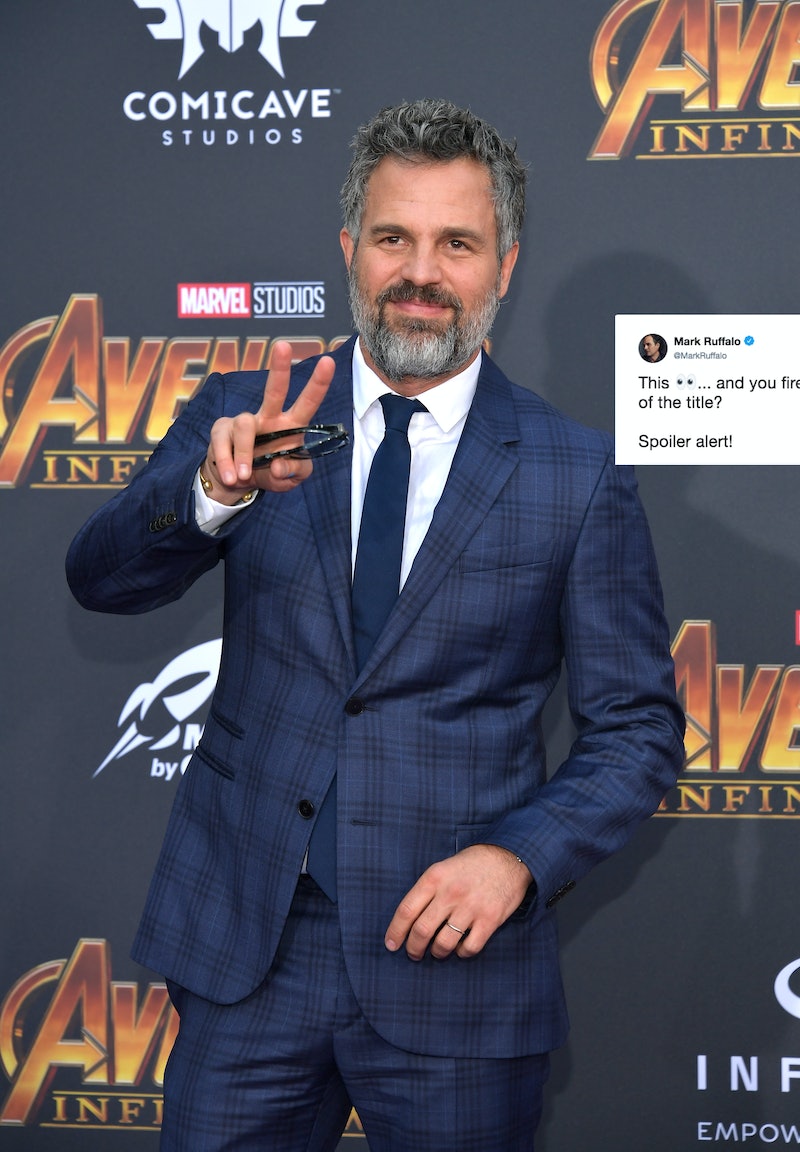 When it comes to revealing major movie spoilers, no one does it quite like Mark Ruffalo. The actor has a longstanding history of accidentally letting things slip about the Marvel Cinematic Universe (like accidentally live streaming Thor: Ragnarok before it's release), so it should come as no surprise that he's once again provided a little insight into the franchise via social media. However, if you were looking for answers, Mark Ruffalo's Avengers 4 spoiler tweet will quite possibly make fans even more confused than they already were. (And given how Infinity War ended, that's really saying something.)

On Monday, Ruffalo posted a comment on Twitter in response to a previous tweet by the tentatively titled Avengers 4 directors Joe and Anthony Russo, claiming that they had shared a spoiler on their Twitter account. The spoiler in question is an image that is almost impossible to interpret, as a blaze of bright white light is covering up any words or images that may be present in the snap shot, supposedly meant to signify the end of filming on the next Avengers movie. "This ... and you fired me for a measly slip of the title? Spoiler alert!" Ruffalo's tweet reads to the alleged "spoiler."

Clearly, Ruffalo is just giving his colleagues a hard time, given all the flack he's taking about spoiling stuff throughout the years. (Though he more than earned that title.) During a recent appearance on The Tonight Show, Ruffalo seemed to reveal the upcoming film's official title. (The words were bleeped out, both for viewers watching at home and in the live studio audience, so it was definitely a planned joke to play on fans.) However, Ruffalo took to Twitter shortly thereafter, pleading for the late night host Jimmy Fallon to cut his spoilery slip up so that he wouldn't get in trouble. That's when the official Russo Brothers Twitter account chimed in to inform Ruffalo that he was fired.

Even though both the Russo brothers and Ruffalo appear to be joking, fans are still attempting to dissect what it could all mean for Avengers 4. One theory that's cropped up several times is that the image the Russo Brothers tweeted is from a section of the new film's logo, considering that the overall color scheme appears to match that of the previous Avengers movies. Others think it could be a close up shot of a police car light. Perhaps suggesting that Thanos will be carted away for his crimes against the universe? That seems doubtful, but then again you never know with these films. Any outcome is possible.

At the end of Infinity War, Thanos essentially wiped out half of the the universe's population with just the snap of his fingers. Numerous Marvel characters crumbled into dust before our very eyes, including Peter Parker, Doctor Strange, Drax, Falcon, Mantis, Black Panther, Groot, Scarlet Witch, and so many others. Can the remaining Avengers save them and undo all the damage Thanos has done? That seems to be the general belief amongst fans, but in the meantime we can only sit back and wait — and maybe hope Ruffalo will let a few more details slip in the coming months to help put our minds at ease.