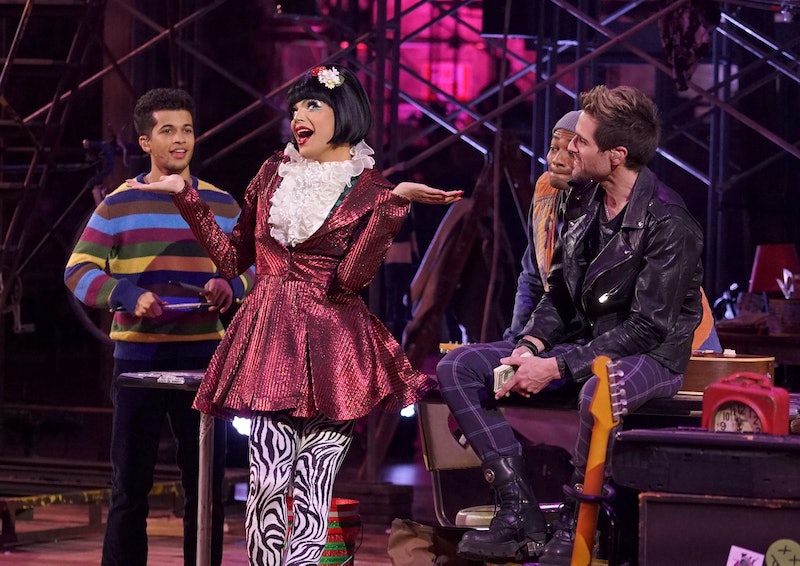 Mark's single-striped sweater in Rent is an iconic fashion piece for any fan of the Broadway musical. And Mark's sweater appeared on Rent Live for a Rent Easter egg. Yet, Angel in Rent Live wasn't feeling the blue and red attire and not all fans were pleased with the insult. While Rent-heads may have been pumped to see Mark's sweater in "Christmas Bells" — Angel wasn't. As they shopped in the streets, Valentina's Angel gave Mark's OG sweater a harsh "No." It clearly was intended as a cute reference to the original costuming, but that didn't stop devoted fans for defending Mark's '90s fashion choices.

In the song "Christmas Bells," the new couple of Tom Collins and Angel are checking out some clothes before Maureen's protest. After all, Collins was just mugged. Angel was already denying a few pieces being shown, but once Mark's sweater is brought up, she makes it clear that she does not approve of the ensemble. Jordan Fisher as Mark is also rocking a striped sweater for Rent Live like the original Mark. But his was adapted to be more palatable to a 2019 audience (and way more colorful) versus Anthony Rapp's very '90s sweater. And fans couldn't help but be defensive of Anthony Rapp's sweater when Angel dissed it.

Yet, some fans were stoked to see the shirt that Rapp made famous. It didn't matter to them how it was brought up, with one person noting that Mark's sweater should get an Emmy nomination. And other people even really enjoyed Valentina's delivery.

Since the original Broadway cast is set to appear during the finale of Rent Live, Rapp probably didn't take offense. (Rapp also cameoed earlier in the Fox production when he gave information about HIV/AIDS via voiceover before "Life Support.") But Rapp clearly has an allegiance to that sweater since he not only wore it for the original Broadway production in 1996, but he brought it out of retirement for the 2005 movie version. He can be seen rocking out in it in the film during "La Vie Bohème."

In the original musical, Rapp rocked his sweater and scarf for the entire show. Costume designer Angela Wendt talked to Entertainment Weekly in 2017 about creating this look. "The sweater was definitely a process ... when I had to create Mark, you think of the person that goes through the whole arc of the story in one outfit, because he tells the story, so we said we're not going to change him, it's all from his viewpoint," said Wendt. "And so it's hard to be something that we actually aren't annoyed to look at for the whole two hours, fifteen minutes of the show and that travels well through everything — not too flamboyant but still interesting enough."

Angel might not have been into the look of the horizontal-striped shirt (and why would she? it's not her style). But millions of others connect with it since it reminds them of when they first met Mark — and the rest of the beloved characters of Rent. And even if you didn't approve of how it got a shoutout, Rent Live let the sweater live on.