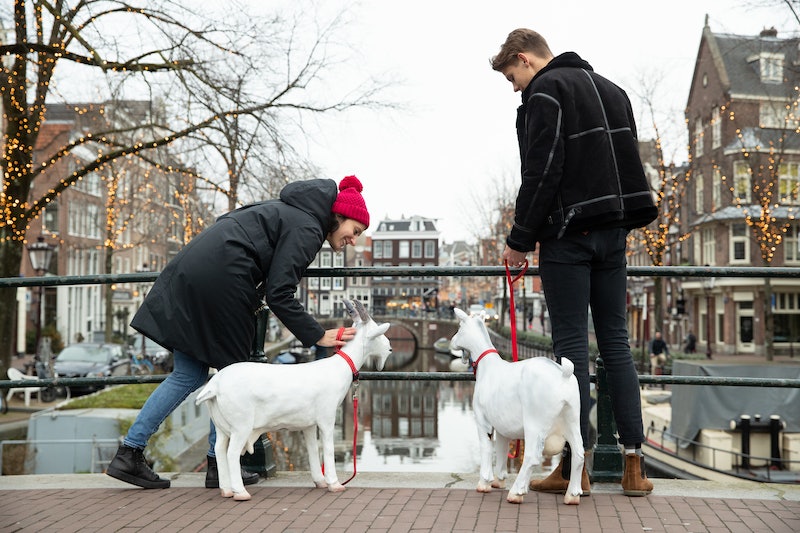 When people talk about eloping, I'm not sure this is exactly what they have in mind. The idea of running away to get married may sound romantic — a way to escape all of the stress and explore somewhere new with your special someone. But what about getting married abroad, for just a day? Under a new "Marry An Amsterdammer" initiative, you can go to the Dutch city and marry a local just for a day — and then get a tour of lesser-known parts of the city. Confused? Intrigued? Me too — here's what you need to know.

Basically, Amsterdam has been trying to find a way to manage the huge inundation of tourists that it's had recently. According to The Independent, the city currently receives around 19 million visitors a year, which is expected to jump to 29 million over the course of the next decade — a huge number for a city of one million people. An initiative called Untourist Amsterdam has set up off-the-beaten-path activities, including "weeding dating" (dating while pulling weeds), plucking and eating a city pigeon (really), and, of course, "Marry An Amsterdammer."

For the activity, you will be matched up for an actual (but very not legal) wedding ceremony — with rings, vows, outfits, and all. It will take about 35 minutes, according to The Independent, and then you'll spend your "honeymoon" seeing parts of the city that you wouldn't normally get to encounter as tourists. Hopefully, it will give a more authentic experience to your trip and, well, maybe even some honeymoon photos to look at one the ride home. It's unclear to me why this couldn't just be a "get paired with a local activity", sans marriage ceremony — but in the immortal words of the musical Gypsy you do, indeed, have to get a gimmick. In this case, the gimmick might just be the 35 most awkward minutes of your life.

It's definitely nice to see a trend towards not only more authentic experiences, but making concerted efforts to keep tourists from suffocating some of the world's most beautiful cities. It's hard to fit so many visitors into a city without disrupting life for the locals — or even making it downright unlivable.

But more and more, we're seeing options for traveling in a new way. If you're someone who loves to travel — especially if you like to travel solo — there are plenty of unique ways that you can explore the world. Companies like Flash Pack specialize in millennial solo trips or you can always just check out some of the unusual travel experiences on Airbnb, which include everything from fire-breathing to a cuddle experience. Seriously, we've come a long way since all-inclusive resorts and cheesy cruises. Personally, I was tempted to go and stay at a working Alpaca ranch, which is an actual real thing you can do — because the world is a beautiful place.

When it comes to shortcuts to solving your romantic woes, I normally wouldn't recommend marrying a stranger in a foreign country and just seeing what happens. But if you're looking for a fun way to explore a new city, it might be the answer. Now you just need to learn how to say "I do" in Dutch. Ik doe.