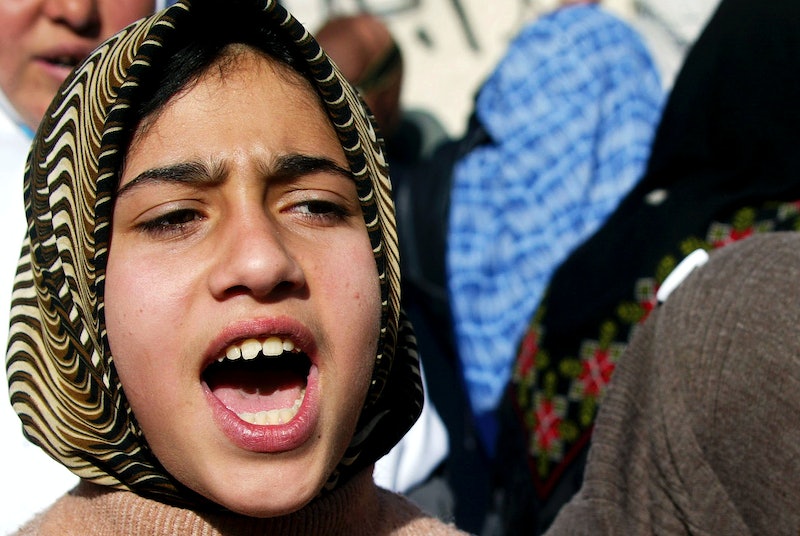 Historically, many countries have employed legal loopholes for rapists that allow them to avoid prosecution for rape if they agree to marry their rape victim. In many locales, these laws have been abolished. However, particularly in the Middle East and North Africa, or MENA, they have remained in place. Thankfully, marry-your-rapist laws are slowly being eradicated in the region due to a significant push from women's activist groups.

As CNN reported, according to Leila Hamarneh, the Director of Projects at the Arab Women's Organization in Amman, marriage rape laws are particularly rooted in tribal "honor codes" that dictate that a woman can "restore honor" to her family following a sexual assault by marrying her rapist.

On Saturday, The New York Times reported that, thankfully, some of these laws are now slowly being eliminated in the MENA region. The paper noted that in 2014, Morocco repealed a law that allowed those convicted of rape to avoid penal implications by marrying their rape victim. The Times likewise indicated that repeals of similar marry-your-rapist provisions in Lebanon and Jordan are due to be voted on in their respective parliaments later this year.

The Times attributed the push to repeal marry-your-rapist laws in the region both to increased women's educational levels in the Middle East and North Africa, as well as to a rise in social media-inspired activism. The paper cited a public awareness campaign in Lebanon earlier this year that featured a jarring display of hanging, bloodied bridal gowns as an example of the type of activism that has helped push lawmakers to consider repealing marry-your-rapist provisions.

But while movements to eliminate these laws certainly constitute solid progress, these repeals still need to be seen through. The votes to end marry-your-rapist laws are anticipated in both Lebanon and Jordan, though they have not yet occurred — and should therefore not be taken for granted. Indeed, last year Bahrain's parliament voted to repeal a similar law, but the repeal was not upheld by the Executive Branch.

Moreover, as the Times pointed out, repealing marry-your-rapist laws still does not solve the problem of the stigma that women and girls face from both law enforcement and society when they report a sexual assault. Thus, it is imperative to continue to advocate for the repeal of marriage rape laws, as well as more broadly for ending the stigmatization of victims of sexual assault.

If you wish to help support the organizations engaged in this work, consider visiting the websites of Abaad and the Arab Women's Organization of Jordan, which are respectively helping coordinate movements to repeal the laws in Lebanon and Jordan. You can follow the groups' work via their websites as well as contact staff members to inquire about donating time or resources, if you are so inclined.

It is certainly promising to see that several MENA countries are headed in the promising direction of repealing these antiquated (and anti-women) marry-your-rapist laws — and, especially, that the movement for repeal was largely driven by women's rights activists. However, it is, of course, still important to keep in mind that much more work still needs to be done in order to help prevent sexual assault as well as to appropriately punish perpetrators and fully protect survivors.