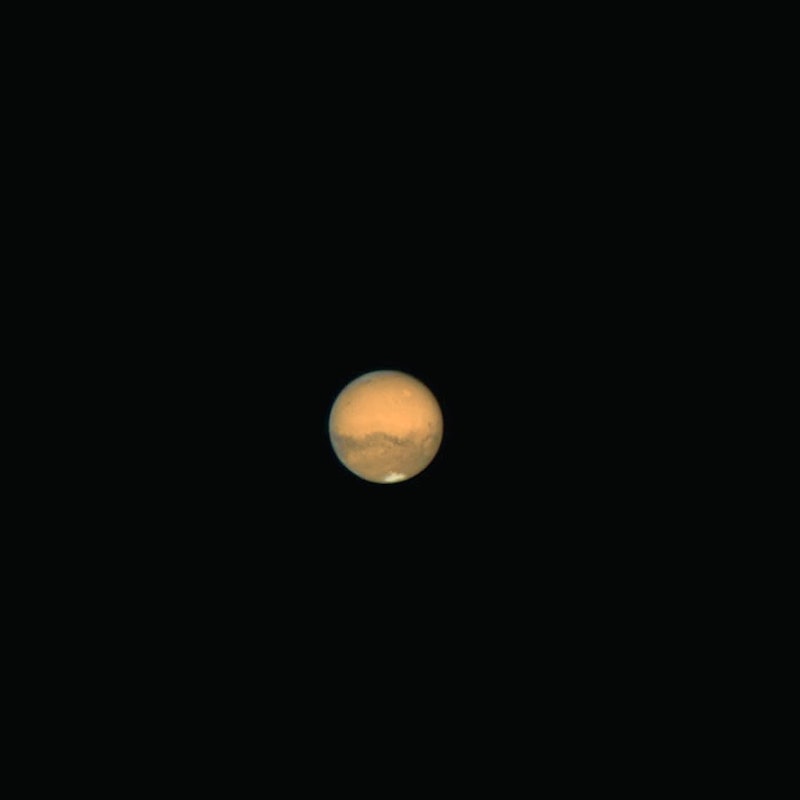 On Jun. 26, Mars went into retrograde — a planetary event that only occurs once every two years. The retrograde motion will continue until Aug. 27, which means we'll be spending a lot more time with the effects of the planet's backward motion. While Mars' retrograde will have different effects on each zodiac sign, there are certain effects that we'll all experience together. To give all zodiac signs a better sense of what's to come, astrologist Lisa Stardust shared her Mars retrograde 2018 astrology predictions with Bustle — and if you're worried about this retrograde, she has some quick advice for you.

In general, we think of Mars as a fiery planet that's linked to desire and heat. So when the planet goes into retrograde, we have consider what how every element of our life will react without the intensifying energy from it. But just because things won't be intense, though, doesn't meant they won't be powerful. According to Stardust, Mars' retrograde is an excellent time of profound inner reflection that can lead to a clear mind and new objectives. Though our thoughts might simmer, our focus will sharpen and we'll be able to go after what we want more efficiently.

Whether it's romance or business, we're all about to experience what it feels like to really get ahead. Additionally, Mars' retrograde is a good time for looking at oneself and seeing you own behavior more clearly. During this period, we can best discern what is serving us and what is no longer working. Aka, we'll all come out of Mars' retrograde feeling self-aware, determined, and clear. And, now that we're in the middle of July, and effectively at the mid-point of Mars retrograde, it's a perfect time for a check-in! Here's what Stardust predicts we'll experience during the remainder of Mars' retrograde:

Stardust predicts that we'll be feeling like what we have isn't enough on this day. She says, "power struggles to surface. We may want our partner to give us more attention than they are able to." So try to be understanding and give your partner some flexibility.

On this day, Mars' retrograde will really stir the pot, Stardust warns, "past upsets and arguments will come to the surface." So watch out for how you react today and try not to take out your frustrations on the wrong person.

Happy lunar eclipse! On this day, Mars is the closest to Earth that it's been in 15 years. Stardust says that this will bring forth some deeply hidden truths. How you react to them is up to you, so make sure that you think before you speak.

In the day after the lunar eclipse, Stardust says that you'll have some "light shed on arguments from yesterday, as the ego forces us to walk away from relationships and partnerships no longer serving our highest interest," aka, get ready to check yourself out of all that isn't suiting you. It will become impossible to ignore those things at this point.

In the aftermath of the lunar eclipse, Stardust says that we will "decide to move forward towards the future no matter what it brings," so make sure your bags are packed and you're ready to make some big changes. You'll have all the mojo you need to do what needs to be done.

Stardust says that this is an important day to take off for healing. The eclipse brings forth a lot of emotions and once we address them, we need to take some time for ourselves to get to a better place.

Stardust tells Bustle, "Mars moonwalks back into Capricorn — a sign Mars loves to be in. Projects started are now completed and we can take a restorative approach to relaxing during the last weeks of summer." Finally, a chance to think about nothing and really relax.

Stardust explains to Bustle that this day will be a great reflective day for us, but it also will highlight some of our behavior that was perhaps not in-line with our morals and ethics. If you've done anything that you're embarrassed about, you'll realize it on this day.

Mars' retrograde is officially over! We've had a lot of time to better our lives and reflect on our decisions, now we have a clean slate to move forward with, as Mars moves forward, too.