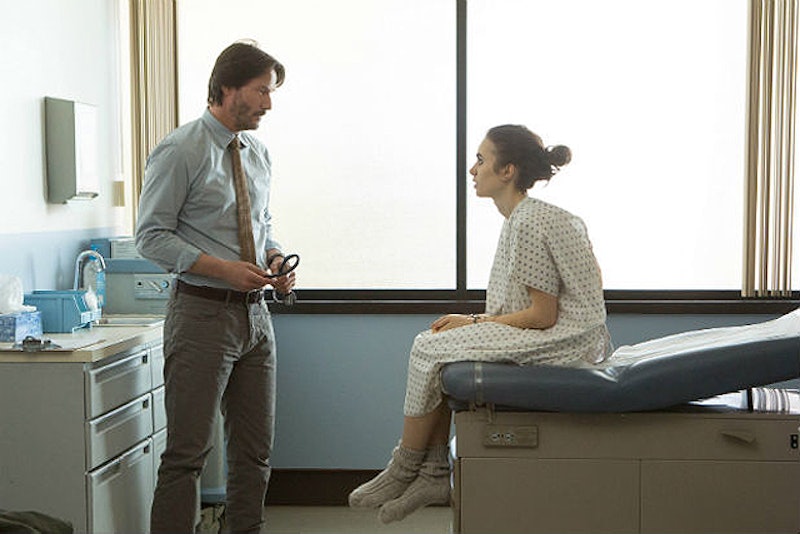 Spoiler alert: To The Bone does not have a happy ending. The Netflix film's anorexic protagonist, Ellen, doesn't magically get better. She starts the movie sick, and she ends the movie sick. And here's another spoiler: Ellen's anorexia isn't cute. It isn't a "quirk." It's a mental illness, pure and simple, that affects every aspect of her life in painful, often gruesome ways. In other words, To The Bone is exactly the opposite of what you'd expect, considering how badly eating disorders have been romanticized on-screen in the past. But as the film's writer and director, Marti Noxon, knows all too well, that hasn't stopped the criticism from pouring in — even just when the trailer was released back in June.

When that first preview of the film came out, many of the responses it garnered were brutal; people tweeted their discomfort with the movie's existence and apprehension over its potential handling of mental illness. Some people, including those who'd suffered from anorexia or other disorders, accused the trailer of seeming to glamorize EDs and recovery, while others called out the film's casting of Lily Collins, an actor who's been open about her past struggles with anorexia, in the lead role.

Everyone, it seemed, had an opinion of the movie, and while not all the criticism was valid (after all, it was based just off the trailer, with little other info), some certainly was. As mental health experts have pointed out, any media depicting eating disorders can potentially be dangerous for both current sufferers and those at risk of developing EDs, due to the images of thin characters and discussions of losing weight. So can a movie about an eating disorder, starring an actor who's previously had one herself, really be anything but triggering?

"I sure hope so," says Noxon. We're speaking via phone in late June, a few weeks before To The Bone's July 14 release, and the director has had a long few days promoting — or, more accurately, defending — the film, both in interviews and on Twitter. The blowback to the trailer was loud and unavoidable, and when we talk, Noxon's weariness with the whole battle is clear. "We’ve been waiting for this day for awhile," she says of the film's upcoming release. "Until people see it, they don’t really see it."

For Noxon, To The Bone is incredibly personal; it's based substantially off her own past experience with anorexia, a disease she struggled with for years as a teen. It has been "painful to excavate" some of the buried-deep memories she has of that time, she says, especially because, when writing the script, she was also struggling with substance abuse issues for the second time in her life.

"Part of the reason I wrote it was to really try to parse what it was that I was looking for when I would go through these periods of self-harm," she says. "I was able to look at that through my experience with eating disorders and look at the whole picture, not just that manifestation of it — why does this person, why do I, Marti, go through these periods where I feel like I don’t deserve happiness or fullness or to be even present?"

That feeling, so intimate and yet so universal, is the driving point behind To The Bone. As anyone who's suffered from a mental illness knows, Noxon says, it never just manifests as one thing; it affects all aspects of your life, and eating disorders, especially, are rooted far deeper than they might appear at the surface. "There’s so many people who say, 'just eat,' or 'just stop,' and it’s so much more complicated than that," the director says.

A writer and producer of shows like Buffy the Vampire Slayer, Mad Men, and UnREAL, Noxon is no stranger to tackling dark, often disturbing issues, but for years, she "wasn't ready," she says, to write about her own anorexia. But a number of factors motivated her to finally give To The Bone a go, notably the fact that over 30 years since her own struggle was as its peak, eating disorders are still incredibly common. "I always thought that by the time I was a grown, old woman, that it would be better," Noxon says. "And if anything, I think that the kind of aspirational world that social media [now] creates only reemphasizes this idea that perfection makes you happy."

With "thinspo" Instagrams and "pro-ana" Tumblrs everywhere you look, the internet can, indeed, be a terrifying place for teens — or anyone — struggling with self-image and mental illness. And even well-intentioned media about those issues, like To The Bone, could end up reinforcing dangerous ideals by showing characters actively losing weight, sharing purging tips, or studying numbers on a scale. When making the movie, Noxon's team got opinions from several people in the ED recovery community, in order to avoid having the film end up "overly aspirational," she says.

Some critics, of course, will still argue that the film is just that, but while their points might be valid, Noxon has no plans to apologize for To The Bone's existence. "We’re not gonna make anybody watch it, that’s for sure," she says. "You have to be mindful of your own recovery."

Still, there's no avoiding that the film will feel understandably problematic to some people, especially when it comes to the casting of Collins, an ED survivor. Although the actor has spoken about how she felt comfortable taking on the role despite her past, many critics still take issue with having someone who's struggled with anorexia lose weight for a role. Noxon emphasizes that no one involved with the film ever asked the star to lose a certain amount, and that everyone, including the actor's own mother, made sure she was never in danger. "As two women who have been through it," Noxon says of Collins and herself, "the spirit we had on the set was one of recovery."

Whether despite Collins' past or because of it, the actor's performance as Ellen is hugely affecting; her struggles, both physical and mental, feel so real that the film is often painful to watch, and a constant, unavoidable reminder of how all-consuming having an ED can be. "What I was really hoping to do was not in any way to glamorize it or be sensual about it," Noxon says. "We didn’t want to pull punches."

Not everyone will think the filmmakers succeeded, though, and the director has seemingly, if reluctantly, come to terms with that. "You can become so afraid of scaring people," she says, "that you end up not showing anything at all." Besides, To The Bone isn't supposed to represent all eating disorder experiences, she says: "This was my story to tell, so I hope, one of the hopes we all have, is that more people will tell their stories now."

Fingers crossed they do, because the more voices out there sharing their experiences, the better. To The Bone is an important story, but, as Noxon says, it's just one — and, as she knows well, there are plenty of people out there with unique experiences and views on EDs and mental illness that deserve our attention, too.

More like this
At 28, Rosie Perez Risked Her Career To Stop Playing Stereotypes
By Gabrielle Bondi
Storm Reid Is A Morning Routine Girlie
By Carolyn Steber
Bonnie Milligan's Wellness Routine, From Daily Journaling To Drugstore Teas
By Jessica Derschowitz
Keyla Monterroso Mejia Is Finally The Star Of The Show
By Gabrielle Bondi
Get Even More From Bustle — Sign Up For The Newsletter
From hair trends to relationship advice, our daily newsletter has everything you need to sound like a person who’s on TikTok, even if you aren’t.