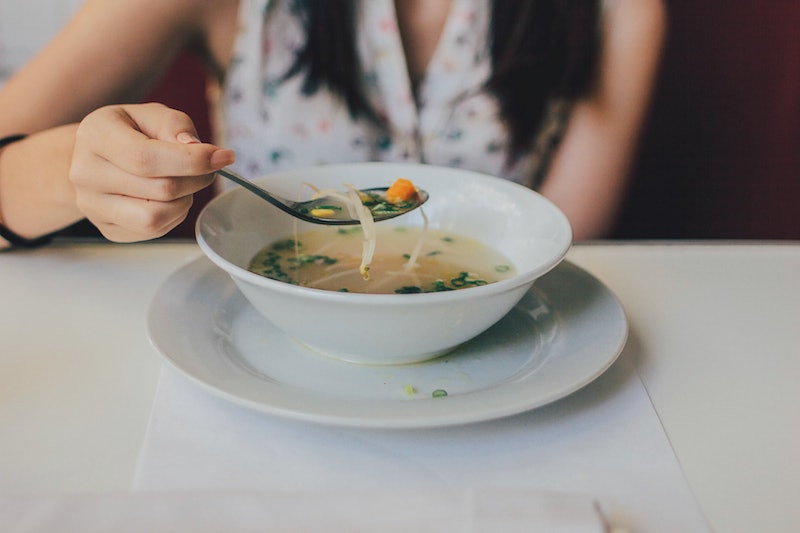 Eating is a basic human function that we all need to do in order to survive. But for the 30 million Americans who suffer from an eating disorder at some point in their lives, what should be simple is a painful act that can leave us feeling worthless. For us, eating isn't about nourishing your body and keeping hunger at bay. Food can function as your savior one second and as your worst nightmare the next; each change hits you unexpectedly, leaving you feeling completely out of control of your body, your mind, and your entire life. I'm not trying to be dramatic; eating disorders can quite literally be a life or death matter. Almost half of all individuals who suffer from anorexia, bulimia, or binge eating disorder (BED) have had suicidal thoughts before, and there are many cases in which people end their lives because their eating disorder has become too difficult to handle.

I've suffered from BED since my high school years, and I can tell you from personal experience that it's a debilitating mental illness that can wreck your universe. Before I sought treatment, I lived in an unpredictable world of self-hatred and loneliness. One thing I always wish people knew about struggling with an eating disorder is that it casts a shadow on everything in your life, no matter how small it may seem from the outside. And sometimes, it can feels like you're fighting a losing battle.

This is what it's really like to live with an eating disorder — at least, for me.

1. The Most Basic Act Of Eating Is Torture

For most people, eating is a normal part of everyday life, usually an enjoyable one. They gather around a table with friends, share warm dishes, and get lost in laughter. The world of food is a very different thing to people with an eating disorder, and the simple act of eating is a difficult one. We get anxious about how that slice of pizza will damage our body and we worry we look disgusting as we take a bite of it. We become nervous about letting people see us eat.

But the destructive reel that goes in our heads is just the beginning. I've been through periods of my life when I feel physically ill as I sit down at the dinner table. My palms sweat, my heart rate skyrockets, and my vision even gets a little blurry. It's more than just a concern that floats around in the back of our heads. People with eating disorders go through hell and back when food is presented to them.

2. Thoughts Of Food Consume Your Mind Most Of The Day

According to the National Centre for Eating Disorders in the UK, to "think and anguish about food all the time" is a primary characteristic of BED and other similar eating disorders. Food becomes the lens through which you experience the world. You can't go about anything during your day without simultaneously thinking about its relationship to eating.

When my untreated BED was at its worst, food consumed my mind so severely that I couldn't focus on tasks at hand. I would forget to do the simplest things, like wash off my makeup before going to bed — all because I was acutely focused on what I had eaten before, and what I was going to allow myself to eat later.

3. You're Always Hyperaware Of What The People Around You Are Eating

One of the reasons you're so concerned with what you're eating in public is because you're concerned about what your food intake is like compared to others peoples'. A person with an eating disorder becomes unhealthily preoccupied with what other people are choosing to eat at any given moment of the day.

For example, in any office or classroom setting I was in, I would never be the first person to whip out a snack. I closely watched what all the people around me were doing and only followed their cue if it wouldn't bring me any unwanted attention. It was an exhausting way to live, and ignoring your own body's needs to that extent takes a toll on you.

4. You Secretly Want To Try Every Diet Fad You Encounter

An unhealthy body image and an eating disorder almost always go hand in hand. Surveys show that more than 80 percent of Americans watch TV every single day, which means nearly all of us are being told by mainstream media what beauty means on the daily.

As a result, we become obsessed with what we look like and think we have to change our bodies in order to fit what we see on our screens. This is why people with eating disorders often secretly feel compelled to test out the latest diet program that's being advertised. Deep down we know it's all a sham, but all we can think about is revamping our eating habits, because our current relationship with food is ruining our lives.

5. You're Always Looking At Other People's Physiques

Being highly insecure about your own body triggers you to be hyperaware of what the people around you look like. It's not that you're being judgmental, rather your eyes wander because you're curious to see what you have to live up to. It sounds horrible, but it's the truth for many people; living in this constant state of comparison is a real soul-sucker. It destroys all your self-confidence and makes you forget about all the things you used to love about yourself.

6. Your Body Weight Fluctuates A Lot

This is a serious health issue many people with eating disorders worry about. It's especially a problem for individuals suffering from BED or anorexia, as they tend to flirt with extreme ends of the spectrum. The consequences are so much more than just not being able to fit into your skinny jeans. Going back and forth between severely overweight or underweight and your natural weight can put strain on your heart, mess with your blood pressure, and increase your risk for Type 2 diabetes.

7. You Sometimes Battle Immense Bouts Of Shame After You Eat A Meal

I'm not talking about basic food regret, where you complain to your friend about eating that extra heap of fries. It's more destructive than that. When my BED was in full swing, I used to lock myself in my closet and fall into a deep hole of depression, all because I ate a normal dinner after swearing that I would only have smoothies for the rest of the week. This is pretty typical eating disorder behavior, and it feels perfectly normal when we engage in it.

8. The Only Time You Feel Comfortable Eating Is When You're Completely Alone

If you really think about it, it's nearly impossible to eat all your meals in complete isolation. There's always somebody around, especially when you're eating out or having lunch in your breakroom. But for someone with an eating disorder, this is a complete nightmare. If it were up to us, we'd only eat when there are no humans around. That way, there's nobody to judge us, nobody around to make us feel like we're freaks.

One of the hardest parts of the healing process is learning to eat with other people around us. It sounds simple enough, but it's a shift that can make us feel like we fit in amongst our friends and family — like we truly belong.

Though I will always have to live with my BED, finally getting help allowed me to gain control over many of these symptoms. So if you see yourself in this article, know that you're not alone, and help is available.