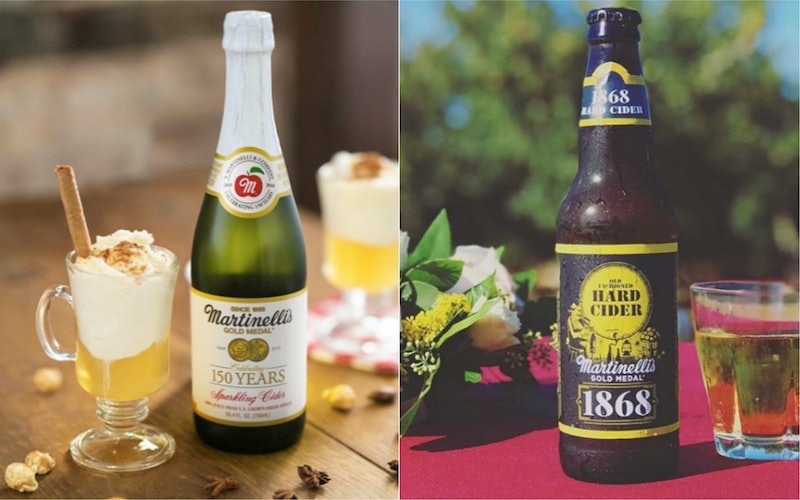 Martinelli's, aka the Patron Saint Of Making '90s Kids Feel Fancy Without Actually Being Served Alcohol At The Dinner Table, just made a big announcement on its Instagram. The company posted on July 27 that Martinelli's launched a hard cider — specifically, its 1868 Hard Cider, which marks the company's 150th anniversary. In other words, the drink that made you feel like a little bourgeois baby at the Thanksgiving kid's table just got the grownup upgrade that nobody saw coming.

According to a press release from Martinelli's, this actually isn't the first time the company has dabbled in the hard cider world — but you might have a wee bit of trouble remembering it, barring the use of a time machine.

“We are very excited about the launch of our 1868 Hard Cider," said Gun Ruder, President of S. Martinelli & Company, in a press release. "It’s a great way for us to remember Martinelli’s rich heritage, as most people don’t realize that the company sold hard cider prior to Prohibition."

For anyone who isn't an alcohol/constitutional amendment nerd, the 18th Amendment, which prohibited “the manufacture, sale, or transportation of intoxicating liquours," was ratified in 1919 and took effect in 1920 — and wasn't overturned until the 21st Amendment in 1933. While plenty of other alcohols made public comebacks, Martinelli's hard cider, it seems, was biding its time — and judging by the description, it will be well worth the wait.

According to Martinell's, 1868 cider — which is the result of a partnership with the Gordon Biersch Company — is "made from fresh-pressed U.S. grown apples that are fermented with no additives of any kind. Flavor-wise, it's a "crisp and flavorful hard cider that lives up to Martinelli’s high standards for fresh taste, quality and purity," according to the press release.

The only drawback to the new hard cider is that you may have some trouble getting your hands on it; per Martinelli's Instagram post, right now it is only being sold in select Costco locations in Northern California. But while we all wait to see if there will ever be a nationwide rollout of this shakeup, you have plenty of other flavor options at your disposal. Martinelli's sells over a dozen varieties of sparkling cider, which include unusual flavor combos like Sparkling Apple-Marionberry and Sparkling Apple-Pear.

And if you're looking for a hard cider that will help ease that transition from summer into fall, there is, of course, the ever-popular rosé hard cider option, which hit the scene in a big way this summer. Most variations are very much like the hard ciders you know and love, but with more floral or fruity notes to them — and, of course, they're all bright, popping pink.

If you're in Northern California, keep your eyes peeled for the Martinelli's hard cider at participating Costcos near you; as for the rest of us, we'll just have to kick it old school with our regular Martinelli's this year the way the '90s gods intended. Cheers, y'all!