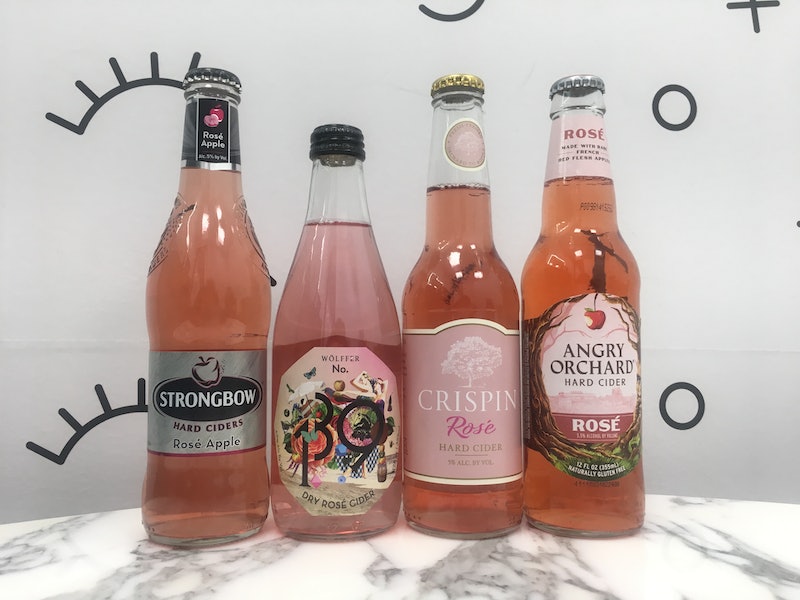 Well, guys, I used to be a human woman, but as my friends and family and now all of you know, I have become but merely a funnel for rose hard cider, the latest trend that is sweeping the internet. Two weeks ago the launch of Angry Orchard's Rose Hard Cider made quite the millennial pink splash online, prompting a lot of similar drinks to come out of the woodwork. But for all the viral insanity of that one particular brand, you may be surprised to find that rosé hard cider is far from a new concept, and has in fact been lurking in the peripheral of your local liquor store for years. But what exactly does rose hard cider taste like, and how do the different brands stack up against each other?

These questions are particularly relevant now that it's clear that rosé hard cider is having its ~moment~. If the summer of 2017 was the Summer of Rosé, then the summer of 2018 — if not the year — is certainly poised to be the Summer of Rosé Hard Cider. And just as no two rosés taste the same (at least before you and a friend team up and polish off a bottle, that is), no two rosé hard ciders do, either. In an effort to get down to the bottom of this hard-hitting and journalistically compelling mystery, the Lifestyle team at Bustle cracked open four different rosé hard ciders available in stores right now to get a sense for what each one of them had to offer. Read on for the juicy deets (and also so we can tell our parents that we didn't get slightly day drunk at work in vain).

First up was the drink of viral lore, Angry Orchard's Rosé Hard Cider. For most of the Bustle editors, this was their first experience in rosé cider, and unintentionally became a comparison point for all of the others. In a previous Bustle article, we wrote in depth about what we thought of the flavor, which ultimately, we agreed, was sweeter and more apple-forward than the others — I personally got some Jolly Rancher vibes from the first few sips (and I say that in a loving way, because my sweet tooth is as notorious as my aggressive as my adoration of all things pink). Of the selections, this one was the one we felt was closest in flavor to traditional ciders; Bustle's Kathryn Kattalia may have hit the nail on the head by affectionately dubbing it "apple juice for grown-up babies."

The second on our list was Strongbow Apple Cider's variety of rosé hard cider, which is its most recent flavor addition (others include Gold Apple, Orange Blossom, Artisanal Blend, and Cherry Blossom). The Rosé Apple version was distinct from the other three varieties of rosé hard ciders we tried in that the carbonation was a little more noticeable, for people who enjoy that extra kick — Bustle's Kristin Magaldi noted that it was more reminiscent of a moscato or a sweet white wine than the others (although not as sweet or apple-forward as the Angry Orchard version). It also had a little less flavor depth than the others — a good thing for those who don't want to be overpowered with apple or sweetness, but maybe lacking for people who are specifically looking for that out of a cider.

This may be the most recognizable bottle to true fans of hard cider rosé; Wölffer's Dry Rosé Cider has been around for years, which is about how long I've been sneaking it into Central Park for summer picnics (got to love that discrete packaging, y'all).

Wölffer's version was, hands down, the unanimous Bustle favorite — probably because it was much drier than the others, and because of that, far more reminiscent of the rosé we all know and love. The flavor is a bit subtler, and it has a not-quite-sparkling hint of carbonation that is *quite* refreshing. Interestingly, this one also sets itself apart with a 6.9 percent ABV, compared to the three others, which are all between 5 and 5.5 percent.

Crispin is also a new addition to the mix, launching their rosé hard cider in December 2017. Bustle editor Tanya Ghahremani already taste-tested it earlier this month, and the Lifestyle team came to a general consensus that of the varieties, this one was the most noticeably "floral" in taste, with a hint of pear — unsurprisingly, it is crafted with apple and pear juice, as well as rose petals and hibiscus, according to their website. In terms of sweetness, it was probably somewhere in between Angry Orchard's and Strongbow's, not noticeably or unnoticeably sweet. Of the varieties, this one probably had the lightest taste, with Bustle's Kristin Magaldi comparing it to a Pinot Grigio. (For what it was worth, this one was also deemed "most Instagrammable" — always an important consideration when summer rolls around.)

Fortunately, when it comes to rosé hard ciders, you really can't go wrong — they're all delicious, and most preferences people had for one over the other had more to do with the general flavor profiles they gravitated to than the quality of the cider itself. Crispin was definitely the most floral, Strongbow the most carbonated, Angry Orchard the sweetest and most traditionally apple-y, and Wölffer the closest to rosé (and the team fave).

It's worth mentioning that because apparently we lost our minds at about the seventh round of communal sipping, we thought it would be an excellent idea to combine all of these into an unholy quartet of rosé hard ciders, as evidenced below*.

(*No editors were harmed in the creation of this hard cider rosé dump-age.)

For what it's worth, rosé jungle juice isn't half-bad (but maybe don't try this at home). As for the non-Frankensteinian versions, all of these varieties are currently available in stores and online, and are available year-round rather than seasonally, so you'll be able to enjoy them at your leisure. Remember to rosé responsibly, y'all.

More like this
12 Aphrodisiac Desserts To Spice Up Your Valentine’s Day
By Kaitlyn Wylde
15 Black-Owned Liquor & Wine Brands To Add To Your Bar Cart
By Alexis Morillo
Dolly Parton Released 4 New Baking Mixes With Duncan Hines
By Alexis Morillo
An Expert Weighs In On The Viral Raw Carrot Salad Trend
By Alexis Morillo
Get Even More From Bustle — Sign Up For The Newsletter
From hair trends to relationship advice, our daily newsletter has everything you need to sound like a person who’s on TikTok, even if you aren’t.