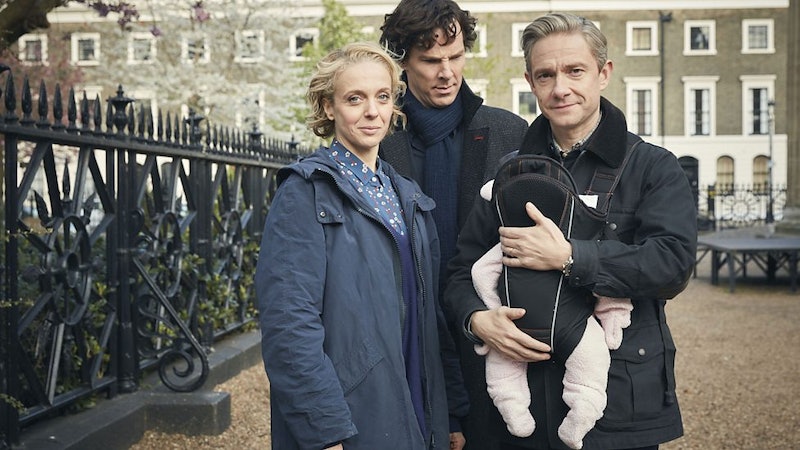 The long-awaited Season 4 of Sherlock returned to our screens on Sunday, and "The Six Thatchers" was well worth the wait. The first episode wasted no time in answering some of the burning questions fans have had since "The Abominable Bride" aired exactly a year ago on Jan. 1, 2016. But, despite teasers suggesting that Moriarty would be the focal point of the first episode, somewhat surprisingly, the main focus of "The Six Thatchers" was Watson's wife Mary. Beware, major SPOILERS ahead. But did Mary Watson die in Sherlock Season 4? Her past came back to haunt her in a terrifying way.

Based on the Arthur Conan Doyle story, "The Adventures Of The Six Napoleons," which you can read online, "The Six Thatchers" revolves around a series of busts of the former British Prime Minister. Someone has been smashing the statues, and Sherlock believes it to be because the black pearl of the Borgias is hidden inside one of them, which would follow the source material more closely. Instead, inside one of the Thatcher busts, Sherlock finds a memory stick, and this is important for a crucial reason — it is identical to the USB stick Mary Watson gave her husband which contained details about her previous life as a "super agent with a terrifying skill set," as Sherlock puts it.

Mary's role in the episode is intriguing for several reasons. Firstly, we get to see the character give birth to her first child with John Watson. The pair are raising a baby, and their marriage seems to be heading in a positive direction. However, Mary's past as a secret agent isn't completely behind her, and Sherlock even utilizes her skills in uncovering the mystery of "The Six Thatchers." Sherlock goes as far as to joke with Watson that Mary is better at detective work than he is, and Watson is literally left holding the baby. The trio are as close as ever, which is fun to see.

However, with the discovery of the memory stick which includes information all about Mary's past, she decides to disappear, writing Watson a goodbye letter. She explains that she will be back one day, but for now, it's safer for everyone that she goes. Sherlock isn't about to let that happen, of course, and tracks her down with ease. He convinces Mary to come home, promising that he'll protect her.

One of agents that Mary used to work with believes that she's betrayed the rest of the team, as the only clue he had referred to an English woman. However, Sherlock goes to confront a bureaucrat and secretary named Norbury, as he deciphers that she's the one who betrayed the team, and not Mary. Despite admitting to the crimes, instead of turning herself in, Norbury stands up to Sherlock and gets out a gun and pulls the trigger. And what happens next is devastating.

Mary jumps in front Sherlock to protect him, taking a bullet for him in the process. She dies in Watson's arms, after telling him that being with him was the only life she needed. Both Watson and Sherlock are completely distraught, and it's shocking to see such an important character killed off at the start of Season 4. Mary's fate is unexpected and totally heartbreaking.

Sherlock won't be the same without Mary Watson, and it's clear that the series is heading in an incredibly sinister direction from the start.