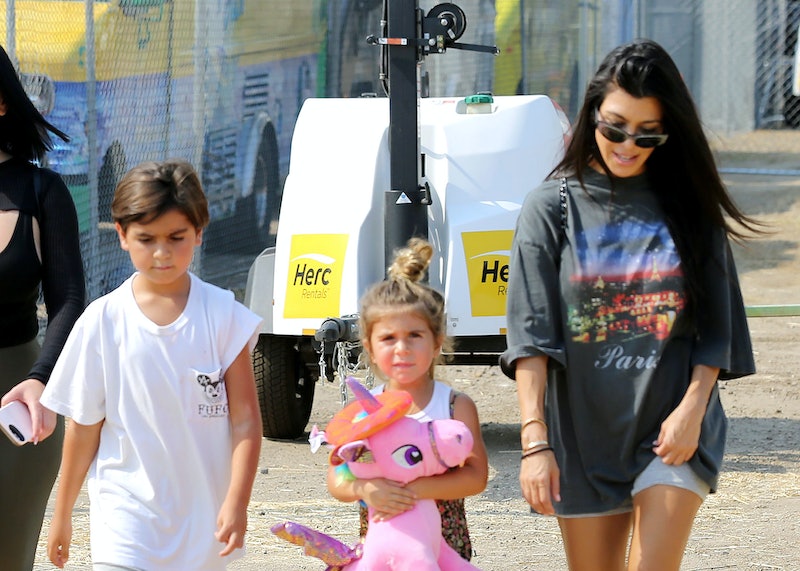 Every member of the Kardashian-Jenner family is in the public eye, even the kids. They all have charisma, style, and famous last names, of course. Not only that, but they have opinions of their own about all the family antics. Now, Kourtney Kardashian and Scott Disick's son Mason Disick will do on-camera interviews on Keeping Up With The Kardashians, according to one of his aunts. Fans have seen Mason his whole life, but there's never been a one-on-one moment with Kris Jenner's oldest grandchild — until this season.

On April 7, a viewer tweeted Kim Kardashian to ask, "Does North ever ask to do confessionals !?!?" That would be logical since North has no problem being front and center on Kim's social media posts, but it's just not her time — yet.

Kim saw that tweet and replied, "Not yet but soon you will see Mason do them. Instead of a producer asking questions @khloekardashian is doing it. I haven’t seen them yet but [heard] they are so funny & heart warming." It was only a matter of time, right?

Mason was literally born in front of cameras on the KUWTK Season 4 finale. No one could ever forget Kourtney pulling him out herself during her own birth. He was the first grandchild in the family, and fans have seen some adorable moments from him throughout the years.

Now that he's older, he has been more vocal during the episodes. Of course, he's going to share his opinions during interviews. During the April 7 episode, Mason was very much opposed to Kanye West's plan to move the family to Chicago. He was the only one who chimed in when Kim brought the topic up in conversation. He was also very adamant about being a fan of his uncle, asking to go to one of his concerts soon.

Interestingly enough, Kanye started doing on-camera interviews for the first time ever this season. Could that be why Mason decided to join in on the family business? Or is it just his destiny since he was literally born on reality television? It might be a combination of both.

While Mason's reasoning may be currently unclear, Kim explained why Kanye decided to do on-camera interviews after so many years during the April 1 episode of Jimmy Kimmel Live. She said, "He saw The Incredibles and he saw that Mr. Incredible and Elastigirl sit and they do their interviews together at the beginning." For anyone unfamiliar with the movie, Mr. Incredible and Elastigirl are also husband and wife.

With both Mason and Kanye taking on greater roles on the show, there's going to be a lot more content to keep up with. Maybe Mason and Kanye will do joint interviews next season.

Fans will just have to wait and see which family members follow in their footsteps with some soundbites of their own. How could would it be for North West and Penelope Disick to do interviews together? Aunt Khloé can interview them too.