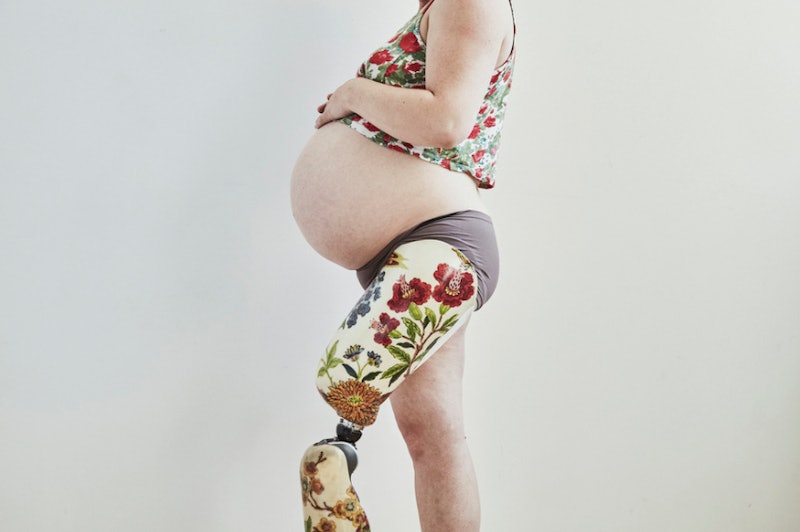 Christa Couture knows that representation is powerful. So when she couldn't find any maternity photos depicting women with disabilities, she decided to make her own. Couture is an amputee with one leg, which she lost during her battle with cancer. She says she's proud of her body and enjoys her prosthetic, where its cheerful floral features have become one of her favorite accessories. But when she Googled "pregnancy and disability," almost no photos showed up — in fact, the majority of them were stock photos or pictures of non-disabled women, which she says erased her experience completely.

"There aren't a ton of one-legged people out there, true, but it wasn’t just that I didn’t see any amputees in maternity photos — I didn’t see any kind of disability. At all," Couture shared in her article for CBC Parents. "It turns out maternity photo shoots, like the rest of the depictions of women readily available, abound with thin, white bodies. And there’s nothing wrong with those beautiful bodies, but they don’t look like mine."

When she became pregnant, she was excited to take part in the tradition of getting her photo taken half-naked in black and white, her hand on her belly, and her smile pointed at the very wanted baby that she was about to meet. But if she didn't see herself represented in the media, it was almost like being told that she couldn't do it, or like motherhood as someone with a disability wasn't possible or never done before. And that was a daunting message to receive.

"I wasn't shocked at the results when I looked for women with disabilities in maternity photos, but I was disheartened — like I was holding on to a hope that I might be pleasantly surprised. Visible disability seems to be one of the hardest things to find when it comes to diversity in representation," Couture shares with Bustle.

"I think people with disabilities are constantly told that they can't do things — in direct ways and in the exclusion from everyday narratives in magazines, movies, sitcoms, advertising etc. So many of us in marginalized groups are," Couture adds. "Intellectually I knew I — as a disabled person — could parent, but a voice of doubt told me that if I couldn't find anyone else who was doing it, maybe they all knew something I didn't. Once I found a few examples, I realized how desperately I needed that vote of confidence. I needed to know it was in fact possible. I needed to see it."

Determined to make sure other women and families didn't experience this disappointing lack in representation, she enlisted the help of photographer Jen Squires, whose self portrait series entitled “Vitiligo” proved to Couture that she could capture body differences in a beautiful and celebratory light.

The two got to work together in the studio, and for Couture it was important for her to take off her prosthesis for some of the photos in order to fully celebrate and accept her body. It was a powerful statement, but that didn't mean she wasn't nervous about doing it.

"For a long time, I thought my amputated leg — my stump — was ugly," Couture says. "I really struggled to like that part of my body. I would be so totally body positive about everyone else but feel incredibly self-conscious of my stump's shape and its scars. In just the last couple years, I started to feel more empowered by this unique part of me, and I wanted to do photos without my prosthesis to in some way cement that."

She says the photoshoot helped her officially celebrate this part of her body, with the added bonus of helping to normalize limbs that look like hers.

The end result was a beautiful and moving series of photos of a mom-to-be whose powerful body was about to bring a kid into the world. And sharing those photos wasn't just about filling a void in representation, but it was a direct message to other people with disabilities which showed that there are other people who look like them and have the same lived experiences as them, and that they are thriving, happy, and living a normal, fulfilled life.

"I hope that disabled women see potential, and for anyone already pregnant or parenting, I hope they see a chance to celebrate what they're doing," Couture shares. "Parenting is challenging for everyone, and having a disability adds to those challenges. I hope seeing these photos makes disabled parents stop and feel good about the ways they're adapting and thriving.

"I hope they know: your difference is powerful — beautiful."