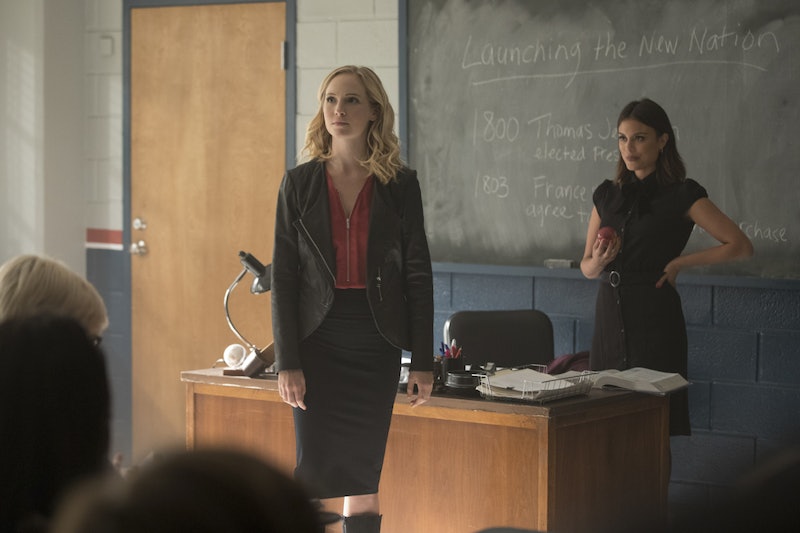 It looks like Matt's estranged father, Peter Maxwell, is going to be staying in Mystic Falls, whether he likes it or not. In The Vampire Diaries mid-season premiere, "We Have History Together," Matt spent some time with his dad and learned more about his family history, the history of Mystic Falls, and his connection to the sirens. Yes, that's right: Matt is connected to the sirens on The Vampire Diaries.

Now, remember when we first met Sybil and she sent Damon on a quest to retrieve an old family heirloom from Peter at his garage? Well, it turns out that's not the only thing Sybil wants from Peter. She's looking for another heirloom, a magical bell made by the original Maxwell in the 1860s. And, despite the fact that Damon ripped her heart out the last time we saw her in the winter finale, Sybil is very much alive and on the hunt. Her plan: get a job as the History teacher at Mystic Falls High, trap Caroline and then use the lives of her innocent students to blackmail Caroline into tracking down this bell.

Matt, meanwhile, ran into his father at the Armory. It turns out, the Armory uncovered some remains of Maxwell ancestors in the tombs, along with some pretty telling documents and diary entries. This old Maxwell, it turns out, kept detailed notes on the sirens, both Seline and Sybil, and just so happened to be a blacksmith. He created the Charter Bell of Mystic Falls, the bell used at the town's founding. (The Maxwells were shut out of the Founding Families, part of the reason Peter held a grudge against the town and left.)

But the Charter Bell is no ordinary bell. It's a weapon. The bell is a perfect fit for the tuning fork that hurts sirens, and together it would amplify the sound. Could the Charter Bell be the key to killing Sybil and Seline once and for all? Whatever the Charter Bell does, it can't be good. Caroline hunted down the bell, which was in her mother's old boxes, and found a note from Seline instead. Seline now has the bell and the tuning fork, and she's nowhere to be found...